Music The Interval between a fundamental tone and the eighth step above it; all the tones within the Interval of an octave. Computed by doubling 2X or halving 1/2 establishes the octave in music and diverse engineering fields.

(1) The Interval of an eighth. It may be major, minor, or augmented. (2) The first note of the harmonic scale. (3) An organ stop of 4 ft. pitch on the manuals, or 8 ft. on the pedals. (4) The eight days following a great festival of the Church. [(Dictionary of Music)]

Tyndall "The first octave is 6 1/4 times the fundamental when bowed, however, when struck, the 1st overtone is the octave, this octave being due to the secondary waves set up when the limits of the LAW OF SUPERPOSITION have been exceeded." [Tyndall, John; Sound; pg 381] 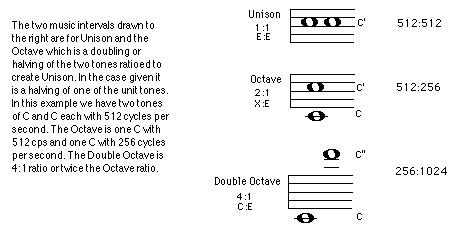 Vibration Analysis - The Interval between two frequencies with a ratio of 2 to 1. Starting from a given frequency, one octave higher is twice that frequency; one octave lower is half that frequency. (Field of Rotating Machinery Measurment, Monitoring and Analysis)

In music, an octave (Latin: octavus: eighth) or perfect octave is the interval between one musical pitch and another with half or double its frequency. The octave relationship is a natural phenomenon that has been referred to as the "basic miracle of music", the use of which is "common in most musical systems". It may be derived from the harmonic series as the interval between the first and second harmonics.

Three commonly cited examples of melodies featuring the perfect octave as their opening interval are "Singin' in the Rain", "Somewhere Over the Rainbow", and "Stranger on the Shore".

The octave has occasionally been referred to as a diapason.

To emphasize that it is one of the perfect intervals (including unison, perfect fourth, and perfect fifth), the octave is designated P8. The octave above or below an indicated note is sometimes abbreviated 8va (= Italian all'ottava), 8va bassa (= Italian all'ottava bassa, sometimes also 8vb), or simply 8 for the octave in the direction indicated by placing this mark above or below the staff. Wikipedia, Octave