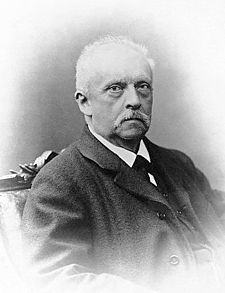 (click to enlarge) Hermann Ludwig Ferdinand von Helmholtz (August 31, 1821 – September 8, 1894) was a German physician and physicist who made significant contributions to several widely varied areas of modern science. In physiology and psychology, he is known for his mathematics of the eye, theories of vision, ideas on the visual perception of space, color vision research, and on the sensation of tone, perception of sound, and empiricism. In physics, he is known for his theories on the conservation of energy, work in electrodynamics, chemical thermodynamics, and on a mechanical foundation of thermodynamics. As a philosopher, he is known for his philosophy of science, ideas on the relation between the laws of perception and the laws of nature, the science of aesthetics, and ideas on the civilizing power of science. The largest German association of research institutions, the Helmholtz Association, is named after him. Helmholtz, Wikipedia