Harmonies of Tones and Colours 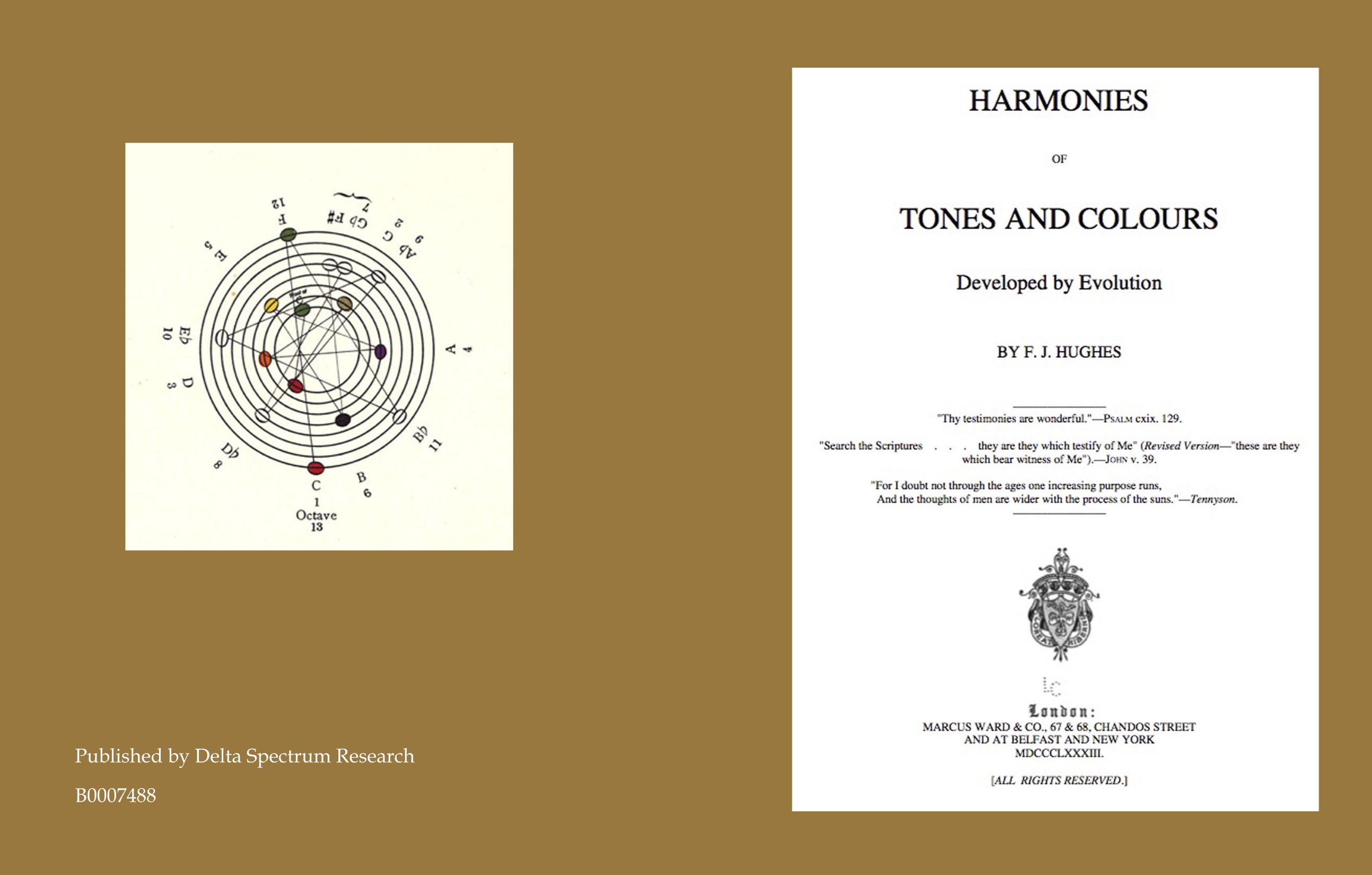 Book on music theory by F. J. Hughes that influenced Keely so much.

Mrs. F. Hughes writing "Tones and Colors", advances theories of her own, which correspond with Keely's. "I firmly believe that exactly the same laws as those which develop sound keep the heavenly bodies in their order. You can even trace the poles in sound." [Snell Manuscript - The Book, page 2]

"The scheme endeavours to prove that the development of harmonies of sound and of colours is regulated by the law of Evolution as gained from the Scriptures - Youthful impressions regarding my great-uncle Dr. Darwin's views - My cousin Charles Darwin's views touched upon - The scheme involves the belief that life developing from the Almighty is the general key to disentangle the intricacies of the Natural Sciences - A remark of Sir John Lubbock's quoted - The development of Numbers the stream of Time, the Sevens of Creation, etc., may eventually be proved by the same laws."

Mrs. F. Hughes, a grandniece of Charles Darwin, gained from her study of the Bible the material for her book on "The Evolution of Tones and Colours," which work, Keely says, saved him years of research in the realm of inaudible sounds possessed by man, without which his various organs would be utterly useless. Bloomfield-Moore sent copies of this book to every known university because of its value to scientific research as proven by Keely. Reprint of the original book. Perfect Binding, 105 pages, 8.5" X 11".

Purchase this item: Harmonies of Tones and Colours - Developed by Evolution

Hughes
In a few remarks on "Tones and Colours," inserted in the Athenæum of February 24, 1877, I alluded to the great loss I had sustained by the sudden death of Dr. Gauntlett. I often retrace with grateful remembrance the kind manner in which he examined this scheme when it was but crude and imperfect; with a very capacious intellect, he had a warm and generous heart, causing him to think over with candour any new ideas placed before him. He was of the greatest use to me, by corroborating the points which I had gained. I remarked to him one day, "I find that, of the double tones, F# is a key-note and G♭ a root." He replied, "You must have a right foundation to work upon, or you would never have ascertained the necessity of the two poles; you have gained the double tones correctly, and the development of harmonies without limit. On this point I have always felt the failure of the laws followed by the musician." [Harmonies of Tones and Colours, Dr. Gauntletts Remarks1, page 13]

The inequality of the equinoctial points is a well-known fact. It will be seen how apparent this is in the developments of harmonies. From the moment that trinities depart from unity, the balance is unequal, and the repeated endeavours after closer union cause a perpetual restlessness. May not this want of equilibrium be the life or motive power of the entire universe, with its continuous struggle after concord, even to oneness? "Closer and closer union is the soul of perfect harmony." In tracing harmonies of tones and colours, the double tones of keyed instruments will be seen to correspond with the intermediate tints and shades of colours. The twelve notes, scales, and chords in the major and minor series, the meetings by fifths, &c., all agree so exactly in their mode of development, that if a piece of music is written correctly in colours with the intermediate tints and shades, the experienced musician can, as a rule, detect errors more quickly and surely with the eye than the ear, and the correct eye, even of a non-musical person, may detect technical errors. Although the arithmetical relation has been most useful in gaining the laws, it is not here entered upon; but numbers equally meet all the intricacies both of tones and colours. The bass notes have been omitted, in order to simplify the scheme. [Harmonies of Tones and Colours, The Arabian System of Music, page 21]

The chords always agree in their harmonies, and thus the close union of all is seen. The corresponding harmonies of tones and colours are also shown. [Harmonies of Tones and Colours, Diagram XV - The Twelve Major and the Twelve Minor Keys, page 42a]

If we examine the line last quoted by the laws of life which regulate the foregoing scheme, we may compare it with the fundamental threefold chord of the scale of C and its relative colours,

from the fountain key-note which contains in itself all tones. "Him first," the Son of God proceeding from the Almighty, and yet in Himself the Trinity in Unity. E, yellow or light. E is the root of B, ultra indigo, or black. "Him midst," the Almighty Father, the Fountain of life, light gradually rising and dispelling darkness. G, blue, "Him last," the Holy Spirit, proceeding from the Father and the Son, Trinity in Unity. The Son of God and the Holy Spirit are the complemental working pair throughout the universe; each containing "the seven spirits of life." Red and blue contain all colours in each. C and G are a complemental pair, C rising from the fountain key-note which contains in itself all tones, and C and G combine all tones in each. In Chapter III. it is explained that all varieties of tones and colours may be condensed into this pair, rising from and falling again into the fountain. [Harmonies of Tones and Colours, Reflections on the Scheme2, page 44]

If the foregoing harmonies of sound and of colour have been rightly developed from the Scriptures, I trust they will be considered as steps gained towards the belief that Evolution is the law of the Almighty for the continuance of activity throughout the universe, and towards an increasing study of Creation and Revelation as mutually explaining each other. According to my belief, the Scriptures must be based on the principle which is explained of keyed instruments at the conclusion of Chapter II. In the development of musical harmonies the beginning and the ending are unfathomable. It is the same in the Scriptures. No musical note or colour can be separated from those below and above it. Neither can any portion of the Bible be separated: every part embraces the past, [Harmonies of Tones and Colours, Reflections on the Scheme4, page 46]

I have passed so many happy hours in comparing Scripture with Scripture, and drawing from its inexhaustible store the laws which develope the harmonies of sounds and colours, that I feel deep regret in drawing to a conclusion. Throughout the investigation the truth has ever been foremost in my mind— [Harmonies of Tones and Colours, Scripture Compared with Scripture, page 47]

IN preparing for a Supplement to "Tones and Colours," several musicians have carefully investigated the work. I transcribe a copy of Dr. Chalmers Masters' opinion, as he had previously studied colours:— [Harmonies of Tones and Colours, Supplementary Remarks and Diagrams, page 53]