The fundamental of a key, can also be lead tone in a chord.

The main tone an object or space resonates with.

The note which, according to the signature, forms the starting point of the scale. The tonic. The 'do'.

"Keely's discoveries embrace the manner of obtaining the keynote, or "chord of mass," of mineral, vegetable and animal substance, therefore the construction of instruments by which this law can be utilized is only a question of full understanding of operation of this law." [KEELYS SECRETS - 1888]

The Keynote
"All matter, living and inanimate, has a keynote. Claude Bragdon the architect, who practiced yoga, invited the opera singer Marie Russak to the New York Central Station which he had designed, before it was opened to the public. 'As she stood in the gallery.' says Bragdon, 'she ran up the notes on the diatonic scale in her rich, powerful voice. At the utterance of a certain note the entire room seemed to become a great resonance chamber, reinforcing the tone with a volume of sound so great as to be almost overpowering. The walls, ceiling and the entire building seemed to shout aloud.

'"There!" cried the singer as the sound died away in overtones. "Now your building has found its keynote - it's alive!" [Harvey Day, "The Hidden Power of Vibration"]

"Music, pure, natural, and harmonical, in the true and evident sense of the term, is the division of any keynote, or starting-point, into it's integral and ultimate parts, and the descending divisions will always answer to the ascending, having reference to the general whole. The essence and mystery in the development of harmonies consists in the fact that every keynote, or unit, is a nucleus including the past, the present, and the future, having in itself an inherent power, with a tendency to expand and contract. In the natural system, as each series rises, its contents expand and fall back to the original limit from any point ascending or descending; we cannot perceive finality in any ultimate; every tone is related to higher and lower tones; and must be part of an organized whole." - [F. J. Hughes, Harmonies of Tones and Colours - Developed by Evolution, page 16. See Overtone Series, fundamental] 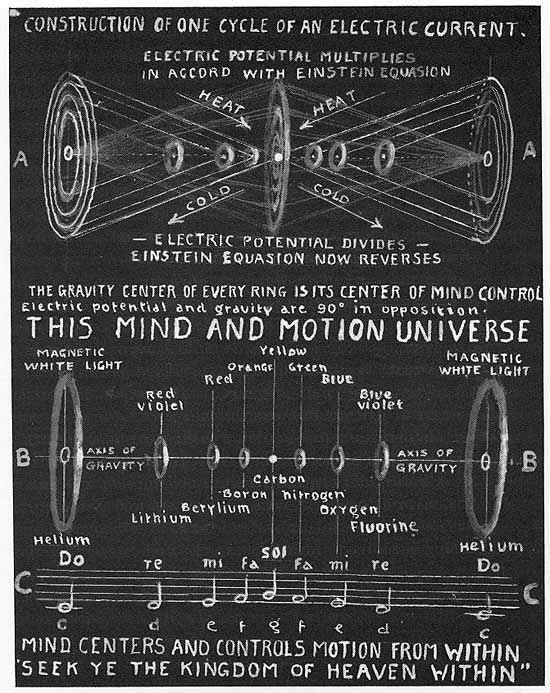 "Fig. 42. Three examples of tonal rhythms of the electric current. Every cycle of an electric current is a complete octave of four pairs and an inert gas keynote. All motion in Nature is tonal and rhythmic. Its rhythms are geometrically and mathematically cube-based.

the presence of the keynote, no matter which one is being sounded, nor how many of them. In matter the inert gas is not so mind-consciously aware of its omnipresence but the sudden electrocution of any element, by passing a heavy current through it, will release all of the tones except the eternal keynote. By this process the area of gravity, represented by the hole, is gradually compressed out until the hole is closed up by the united pair and the very dense, hot, solid sphere is the product. The life half of the polarized body, which was created by an effort, comes to an end, and the death half, which requires no effort, begins." [Atomic Suicide, page 162-164]