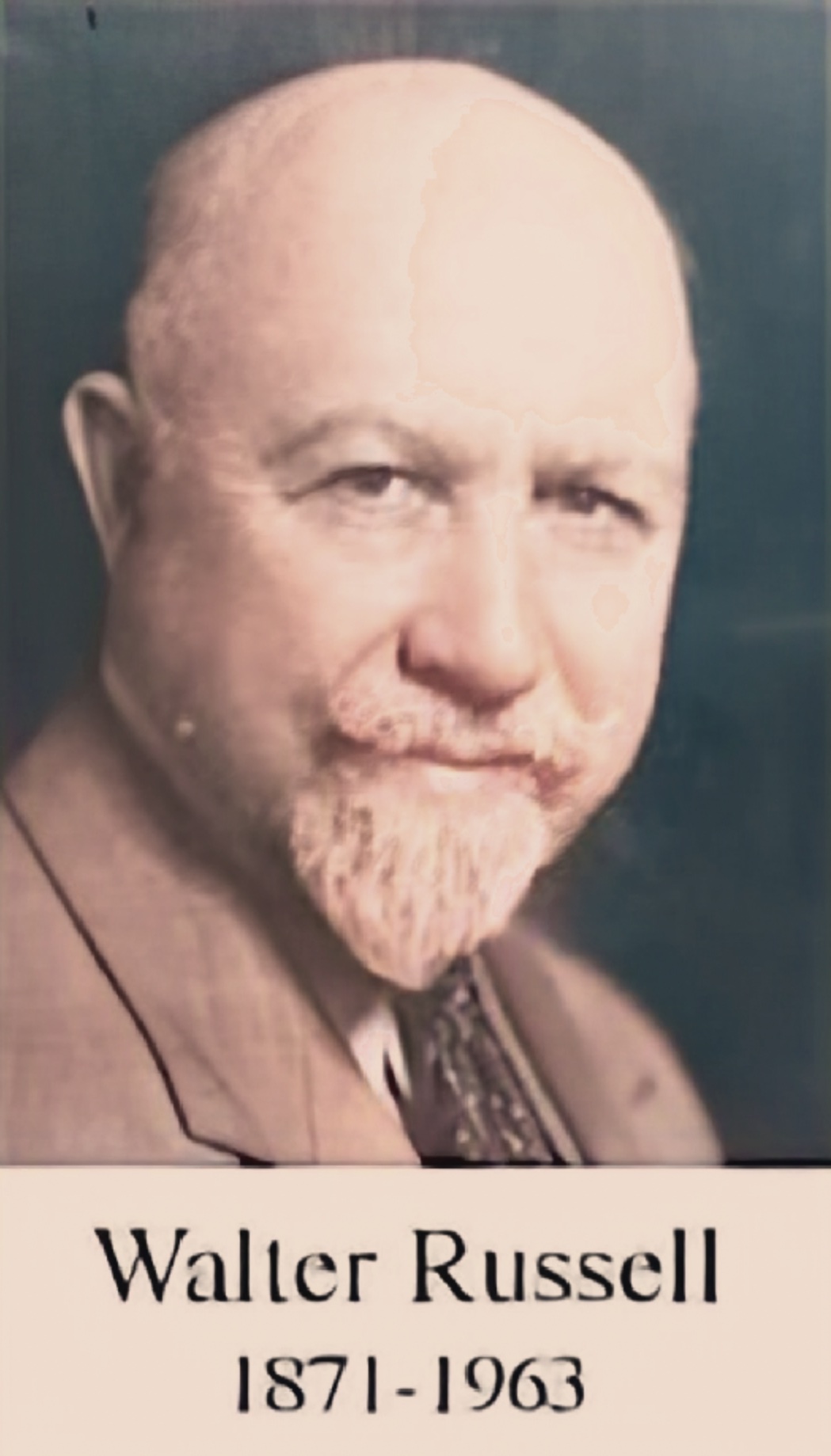 Walter Russell
“Thus I was made to see the universe as a whole and its simple principle of creation as one unit, repeated over and over, endlessly and without variation, as evidenced in the universal heart-beat to which every pulsing thing in the light-wave universe is geared to act as ONE UNIT OF ONE WHOLE." [Dr. Walter Russell, The Man Who Tapped The Secrets Of The Universe]

Walter Russell is known for his scientific, philosophic and artistic contributions. He is credited with a wide variety of achievements including introducing figure skating to America, discovered several unknown elements of the Periodic Table, notable architect, writer, painter and sculptor. Walter experienced 39 days of illumination or Satori and spent the rest of his life writing about, illustrating and explaining insights gained during that experience.

"I will put it very simply. In May of 1921 God took me up into a high mountain of inspiration and intense ecstasy. A brilliant flash like lightning severed my bodily sensation from my consciousness and I found myself freed from my body and wholly in the Mind universe of Light, which is God. And then God said to me, “Behold thou the unity of things in Light of Me, and the seeming separateness of all things in the two lights of my divided thinking. See thou that I, the Undivided, Unchanging One, am within all divided things, centering them, and I am without all changing things, controlling them.” And the secrets of the universe were unfolded to me in their great simplicity as the doors to the Light opened fully to my consciousness. In less time than it takes to put it into words, I knew all there was to know of the CAUSE of all effect, for there was very little to know. In that hour it was as though the infinity of complexity within the moving kaleidoscope were suddenly taken apart and it was shown to me that the entirety of its illusion was but three mirrors and a few bits of broken glass. Likewise the universal kaleidoscope was but moving mirror waves of dual light extending from their equilibrium in God from Whom all creating things spring in octave electric waves just as ocean’s waves spring from the calm sea." [Walter Russell]

(May 19, 1871 - May 19, 1963) Walter Russell (1871 - 1963) was an American polymath, known for his achievements in painting, sculpture, architecture, and for his unified theory in physics and cosmogony. He posited that the universe was founded on a unifying principle of rhythmic balanced interchange. This physical theory, laid out primarily in his books The Secret of Light (1947) and The Message of the Divine Iliad (1948 - 49), has not been accepted by mainstream scientists. Russell asserted that this was mainly due to differences between himself and scientists in their assumptions about the existence of mind or matter. Russell was also proficient in philosophy, music, ice skating, and was a professor at the institution he founded, the University of Science and Philosophy. He believed mediocrity is self-inflicted and genius is self-bestowed.

In 1963, Walter Cronkite in the national television evening news, commenting on Dr. Walter Russell's passing, referred to him as "... the Leonardo da Vinci of our time." [Wikipedia]

Books by Walter and Lao Russell - in order of publication date

It is significant that the philosophies of Russell and Keely are in many particulars, identical. There are differences but not many. Keely was more scientific and technical while Russell was more philosophical and artistic. I have found that where one came up short the other filled in quite nicely. [Dale Pond]

Dale,
"In my years of study and living at the USP, I never ran across any references to Keely in either of the Russells' writings. Don't know why he did not attract that knowledge into his understanding of how the Universe works." [Chester Hatstat]

"I was going through the Russell's insight in the book you [Toby Grotz] donated to me. I am convinced that he did have glimpses of reality. He is clear on the inward nature of gravitational force and also on relation of gravity with light. On the more fundamental issue of space and matter his vision that "space creates matter is correct" but when he says that "matter creates space" should read that matter creates "fields" in space. To translate visions into words, in some cases, new vocabulary is needed. In my case it took me two years of deep thinking to write the two simple fundamental equations on mass and charge. How could a void - volume be proportional to mass? The understanding came: that prior to the creation of the void, the volume of space-fluid in circulation at the speed of light (within the spherical void formed later), was enegy proportional to the mass equivalent of this void.

"In any case he reached reality through visions that nothingness is not the substratum of the universe. And that is more important than 1000 papers on relativity and quantum physics." [Tewari]