Keely did revolutionary work decoding the ancient knowledge. He systematized those old insights into a coherent practical science. Perhaps the backbone of his work was his orderly division of matter and energy into a clear scale of density and energy from the gross Molecular to what he called the Compound Interetheric or highest/finest plane he could investigate. 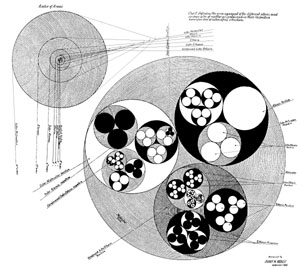 "Keely has proved by demonstration (prior to 1893) that the subdivision of matter under different orders of progressive vibration evolves by such subdivision entirely new and distinct elements, too multiple to enumerate. He has systematized the proper vibratory chords, progressively, from the introductory molecular to the interetheric, embracing seven distinct orders of triple subdivision. He has elaborated a system of inducing sympathetic negative attraction on metallic masses, with great range of motion, and instant depolarization of the same, by vibratory change of their neutral centers. Keely controls the transmission of these Sympathetic Streams by a medium of high molecular density, viz. drawn wires of differentiated metals, gold, silver, platinum, German silver, etc." [Bloomfield-Moore, see Phase Change, state]

"It must be remembered that Keely claims to have demonstrated the subdivision of matter in seven distinct orders: molecular, intermolecular, atomic, interatomic, etheric, interetheric, reaching the compound interetheric in the seventh order, or the substance of the will. How can such claims be expected to command the attention of men of science, when one of the most liberal among them has said that to say the will is a material thing belongs to the crude materialism of the savage?" [The Connecting Link Between Mind and Matter - Keelys Progress - Part 2]

"In comparing the tenuity of the atmosphere with that of the Etheric flows, obtained by Mr. Keely from his invention for dissociating the molecules of air by vibration, he says, 'It is as platina to hydrogen gas."

The Seven Subdivisions of Matter and Energy

[These subdivisions are in fact seven different phases of matter. See The Seven Subdivisions of Matter and Energy]

"In my introductory argument I have contended that this is the vibratory envelope of all atoms. In my definition of atom I do not confine myself to the sixth subdivision, where this luminiferous ether is developed in its crude form, as far as my researches prove. I think this idea will be pronounced, by the physicists of the present day, a wild freak of the imagination. Possibly, in time, a light may fall upon this theory that will bring its simplicity forward for scientific research. At present I can only compare it to some planet in a dark space, where the light of the sun of science has not yet reached it." [Keely in Keely and His Discoveries]

There are different kinds or degrees of matter and vacuum (dispersed matter). Each contains or is a media of different tenuity or density and has unique characteristics or parameters. See Subdivision, Dispersion, Scalar, Etheric Elements

Table of Subdivisions of Matter and Energy

Figure 1.3 illustrates how the universe is constructed of imbedded or nested (holographic or Fractal) layers of physical structure and dynamics. Molecules are made of atoms, atoms are made of leptons, etc. These are not dimensions existing independent of each other but are intermingled and interpenetrating each other. The lower frequency dimensions or realms of existence are predicated on or effectuated by the higher frequency realms, dimensions, planes or levels. The finer levels are the building blocks of the lower realms. In other words there can be no molecules without atoms; no atoms without electrons; no electrons without photons; no photons without quarks, etc. The structure of these nested realms are held (Keely) to be identical on all levels much like the repetitive imbeddedness of fractal math and images. The same structure applies to syntropic energy formation. See Nested Morphology

Figure 1.3.1 - Subdivisions of Matter and Energy according to Keely

Christ Returns - Speaks His Truth
"Your entire universe manifests the differing frequencies of vibrations of consciousness energy particles. As these frequencies move up or down from one level to another, so do the visible and physical structures manifest differing levels of energy and there is a change of mental patterns and emotions and appearance." [Christ Returns - Speaks His Truth, Letter 3, page 12]

500 Levels of Matter & Energy now Recognized
"Forget solid, liquid, and gas: there are in fact more than 500 phases of matter. In a major paper in today's issue of Science, Perimeter Faculty member Xiao-Gang Wen reveals a modern reclassification of all of them. Using modern mathematics, Wen and collaborators reveal a new system which can, at last, successfully classify symmetry-protected phases of matter. Their new classification system will provide insight about these quantum phases of matter, which may in turn increase our ability to design states of matter for use in superconductors or quantum computers. This paper, titled, "Symmetry-Protected Topological Orders in Interacting Bosonic Systems," is a revealing look at the intricate and fascinating world of quantum entanglement, and an important step toward a modern reclassification of all phases of matter."