Dimension, in SVP, refers to the strata of subdivisions of matter and force; i.e., varying proportional mixtures of syntropy and entropy. In the chart below we can see nine subdivisions of matter from Molecular (solid matter) to Compound Interetheric (Mind). Each subdivision (horizontal row) is contemplated or contexted as a "dimension" in SVP. [See Russell's Eighteen Attributes or Dimensions, subdivision]

NOTE: The volume of space never was empty. While it appeared to be empty of physical objects it was however permeated with radio, light and other forms of non-visible energies. see Vacuum 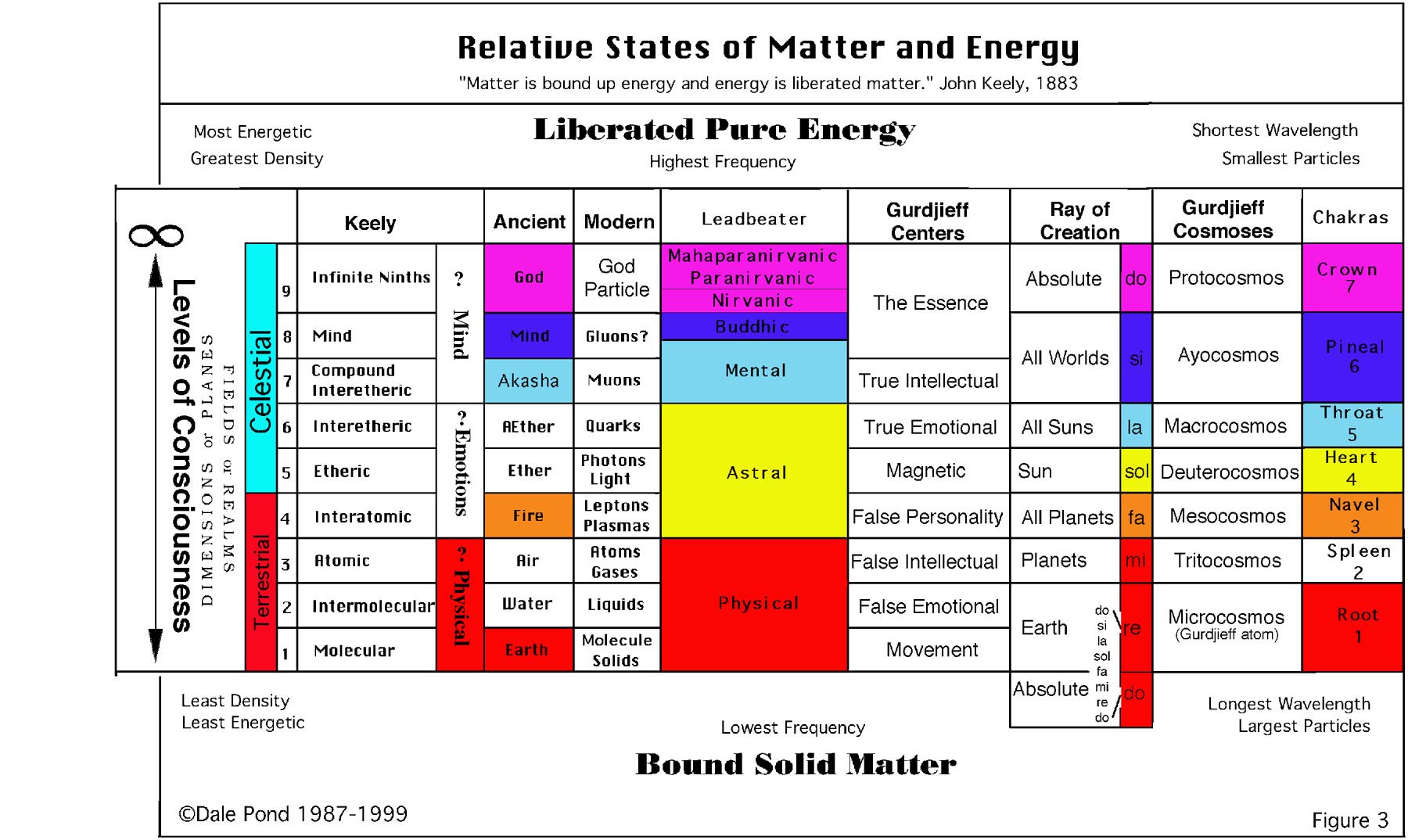 
Another way of showing similar categorization of Matter, Force and Energy states.


Keely
Dimensional or Inter-Dimensional Beings
"There is much atmospheric celestial material that has never been revealed to man's senses. Attenuated elements extend to infinite reaches beyond hydrogen, including actual substances or compounds which have never been revealed to our senses. Beings fashioned of these substances could walk by our sides unseen and cast no shadow in the noonday sun." [Keely, The Operation of the Vibratory Circuit, The Connecting Link Between Mind and Matter - Keelys Progress - Part 2]

"Where, therefore, is dimension, or time? If that event is happening within your room NOW as an unfolding from an electronic seed, and that dimensionless seed is unfolding in 50,000,000 rooms, how can you say that it is ten thousand miles, and weeks of time away from you? If you place a yardstick upon a mighty oak and measure its many dimensions, and then the oak withdraws those dimensions into its concept, as recorded in its seed, or in your eye, how can you say that the dimensions you measure with a yardstick and weighing scales, have any reality in a universe in which the reality you believe in disappears before your very eyes." [Atomic Suicide, page 153]

Schauberger
"We must look into unknown dimensions, into Nature, into that incalculable and imponderable life, whose carrier and mediator, the blood of the Earth that accompanies us steadfastly from the cradle to the grave, is water." [Viktor Schauberger, 1932, Implosion Magazine, No. 103, p. 28]

"Whoever accelerates the media of earth, water and air centrifugally perishes unconditionally, for in so doing they reduce the Blood of the Earth (water) to a pathogenic state and make it the most dangerous enemy of all living and growing things." [Viktor Schauberger, Implosion Magazine, No. 96, p. 4.]

[1] retro-influent, refers to the energy-form that reverts to physical substance in contrast to that which exalts to metaphysical dimensions of energy. — Ed. [The Energy Evolution - Harnessing Free Energy from Nature, Magnetism - Electricism]

"Again, the answer came in renewed strength and a greater sureness of foot as I scrambled over the rough ground. I found, too, that I was covering long distances so quickly that it seemed that I had stepped outside normal time reckoning, and I was in a lighter dimension where human experience was lifted above its heavy thralldom of exhausting expenditure of energy. Walking was so easy it was now invigorating. I exulted in the fact that I had found the key to 'more abundant life'!" [Christ Returns - Speaks His Truth, Letter 1, page 20]

"Bear in mind, at all times, that your SOURCE of BEING is in two states -

in equilibrium and activity.

The ACTIVE state of your SOURCE of BEING is the dimension in which you have been conceived and given individualization.
The EQUILIBRIUM of UNIVERSAL CONSCIOUSNESS is the dimension of perfect silence and stillness, in which the underlying IMPULSES OF CREATIVITY are locked together in an embrace of mutual restraint." [Christ Returns - Speaks His Truth, Letter 9, page 8]