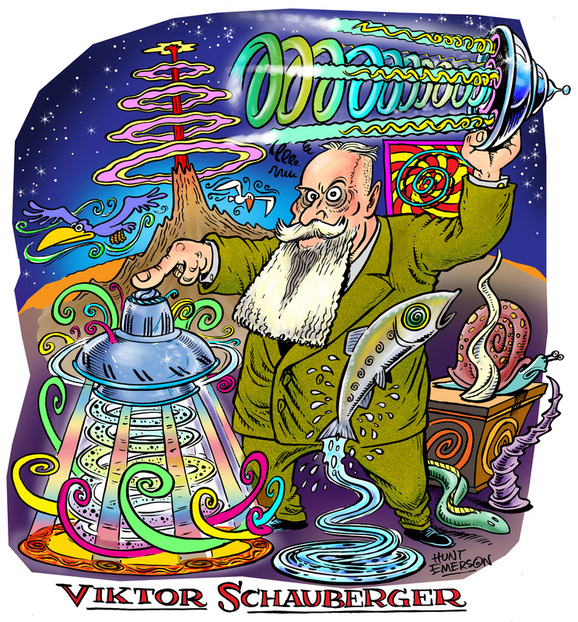 
Viktor Schauberger (1885-1958) was an Austrian man who spent much of his life as a forestmaster in his native country, and as an inventor who had a deep understanding and appreciation for the life energy dynamics of what he quite clearly called water's life cycle. He put forth the scientific idea that water is indeed alive, and as such it can be sterile, immature or mature depending on the cluster size, treatment, motion and temperature of the water. An early invention was for a wooden pipe to carry water. It was believed by Schauberger that in order for water to mature it must not be exposed to sunlight and be allowed to flow undisturbed, meaning to be able to move in a snakelike fashion. What is actually happening in a naturally coursing stream is that there is a longitudinal whirling flow which forms along the length of the stream. In several books on his life and work such as 'Living Energies' by Callum Coats, there are detailed diagrams Schauberger produced that show the electrical and temperature gradient cycles in forests and rivers and their importance to the quality of the water contained therein.

'Understand and duplicate nature' was one of Viktor's most famous sayings, denoting his simple philosophy. In practice this deep understanding of the treatment of water would lead him to create several machines, such as the repulsine, that use the principle of vortex motion in their design. In the repulsine, air is passed through a narrow corrugated chamber created by two plates with impelling blades along the outer edge, so as to create a suction turbine. In one experiment Viktor plotted the resistance of three test pipes to water flow. He found that the first, glass, increased at about a 40 degree angle on the chart. Copper was a little less, about a 30 degree angle. A spiraling copper pipe plotted a variation over various flow rates, however at one point on the graph it drops below zero, denoting the 'sweet spot' where the flowrate temperature and volume of the water all match up. Schauberger found that the ideal temperature for water is around +4°C where it is at its densest, before it starts expanding from heat or expanding to crystallize. So in his inventions the suction action would be used to further cool the water - if it can be controlled to stay in the sweet spot by its own suction action, then efficiency goes up considerably.

Viktor Schauberger was also an avid farmer. He devised a heart-shape spiral plough in which soil is turned out in a longitudinal spiral as it passes through the blades of the plough. He alo found that the copper content of the soil is important, and to use copper or copper coated tools is much better than steel ones. The reasons involve electrical charge of the water and how it interacts with dissolved minerals in the soil. [no source given]

Viktor Schauberger on his observation of Nature, particularly water:

The Schauberger’s principle preoccupation was directed towards the conservation of the forest and wild game, and even in earliest youth my fondest desire was to understand Nature, and through such understanding to come closer to the truth; a truth that I was unable to discover either at school or in church.

In this quest I was thus drawn time and time again up into the forest. I could sit for hours on end and watch the water flowing by without ever becoming tired or bored. At the time I was still unaware that in water the greatest secret lay hidden. Nor did I know that water was the carrier of life or the ur-source of what we call consciousness. Without any preconceptions, I simply let my gaze fall on the water as it flowed past. It was only years later that I came to realise that running water attracts our consciousnesses like a magnet and draws a small part of it along in its wake. It is a force that can act so powerfully that one temporarily loses one’s consciousness and involuntarily falls asleep.

As time passed I began to play a game with water’s secret powers; I surrendered my so-called free consciousness and allowed the water to take possession of it for a while. Little by little this game turned into a profoundly earnest endeavour, because I realised that one could detach one’s own consciousness from the body and attach it to that of the water.

When my own consciousness was eventually returned to me, then the water’s most deeply concealed psyche often revealed the most extraordinary things to me. As a result of this investigation, a researcher was born who could dispatch his consciousness on a voyage of discovery. In this way I was able to experience things that had escaped other people’s notice, because they were unaware that a human being is able to send forth his free consciousness into those places the eyes cannot see.

By practising this blindfolded vision, I eventually developed a bond with mysterious Nature, whose essential being I then slowly learnt to perceive and understand. [Viktor Schauberger]

''Nature is not served by rigid laws, but by rhythmical, reciprocal processes. Nature uses none of the preconditions of the chemist or the physicist for the purposes of evolution. Nature excludes all fire on principle for purposes of growth; therefore all contemporary machines are unnatural and constructed according to false premises.

Nature avails herself of the bio-dynamic form of motion through which the biological prerequisite for the emergence of life is provided. Its purpose is to ur-procreate [re-create the primary, the essence of] ‘higher’ conditions of matter out of the originally inferior raw materials, which afford the evolutionally older, or the numerically greater rising generation, the possibility of a constant capacity to evolve, for without any growing and increasing reserves of energy there would be no evolution or development.

This results first and foremost in the collapse of the so-called Law of the Conservation of Energy, and in further consequence the Law of Gravity, and all other dogmatics lose any rational or practical basis.'' [Viktor Schauberger, source : from "Implosion" no. 81 re-printed in Nexus magazine Apr-May 1996] 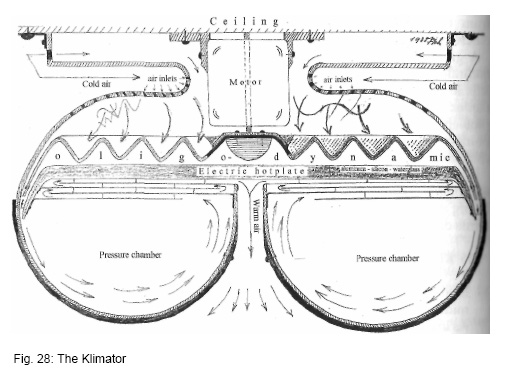