Cavitation is the same as Implosion differing in degree or scale.


In my considered opinion a cavitation bubble is formed via increasing pressures (via syntropic assimilation) which pressures eventually trigger Russell's Principle of Regeneration and Keely's Law of Cycles (to begin with). This process 'etherizes' (dissociates) the water molecules into plasma gases which form the bubble. Dale Pond 6/10/11

"A drop in pressure (vacuum) on a liquid creates pockets or bubbles in the liquid - an increase in pressure causes these bubbles to collapse resulting in tremendous "local" force which can cause damage via (dissociation) to metals and quite often exceeds the energy required to initiate the cavitation.

There are four recognized forms of cavitation. Undoubtedly there are more.

1. Hydrodynamic cavitation is produced by pressure variations in a flowing liquid due to the geometry of the system.


Incipient cavitation is the term used to describe the type and stage of cavitation that is just detectable as the cavitation appears.

Desinent cavitation is the term used to describe cavitation just before it disappears.

1. Travelling cavitation occurs when cavities or bubbles form in the liquid, and travel with the liquid as they expand and subsequently collapse.

2. Fixed cavitation occurs when a cavity or pocket attached to the rigid boundary of an immersed body or a flow passage forms, and remains fixed in position in an unsteady state.

3. Vortex cavitation occurs in the cores of vortices which form in regions of high shear, and often occurs on the blade tips of ship's propellers - hence the name "tip" cavitation.

2. Acoustic cavitation is produced by sound waves in a liquid due to pressure variations.


Two important characteristics of acoustic cavitation should be mentioned here. The first is that generally it is a non-linear process in that the change in the radius of the bubble is not proportional to the sound pressure. The second is that the high compressibility of the gas bubbles means that much potential energy is obtained from the sound waves when the bubbles expand and that kinetic energy is concentrated when the bubbles collapse. In transient cavitation, this transformation of a low energy density sound wave into a high energy density collapsing bubble occurs because the motion is non-linear. Because it concentrates the energy into very small volumes it can produce very high pressures and temperatures which can erode solids, initiate chemical reactions and produce luminescence." (Young, Cavitation)

3. Optic cavitation is produced by photons of high intensity (laser) light rupturing in a liquid.


4. Particle cavitation is produced by any other type of elementary particles, e.g., a proton, rupturing a liquid, as in a bubble chamber. (Young, Cavitation)


Cavitation is the formation and activity of bubbles (or cavities) in a liquid. Here the word 'formation' refers, in a general way, both to the creation of a new cavity or to the expansion of a preexisting one to a size where macroscopic effects can be observed. These bubbles may be suspended in the liquid or may be trapped in tiny cracks either in the liquid's boundary surface or in solid particles suspended in the liquid.

The expansion of the minute bubbles may effected by reducing the ambient pressure by static or dynamic means. The bubbles then become large enough to be visible to the unaided eye. The bubbles may may contain gas or vapour or a mixture of both gas and vapour. If the bubbles contain gas, then the expansion may be by diffusion of dissolved gases from the liquid into the bubble, or by pressure reduction, or by temperature rise. If, however, the bubbles contain mainly vapour, reducing the ambient pressure sufficiently at essentially constant temperature causes an 'explosive' vaporization into the cavities which is the phenomenon that is called cavitation, whereas raising the temperature sufficiently causes the mainly vapour bubbles to grow continuously producing the effect known as boiling. This means that 'explosive' vaporization or boiling do not occur until a threshold is reached.

There are thus four ways of inducing bubble growth:

1. For a gas-filled bubble, by pressure reduction or increase in temperature. This is called gaseous cavitation.

2. For a vapour-filled bubble, by pressure reduction. This is called vapourous cavitation.

3. For a gas-filled bubble, by diffusion. This is called degassing as gas comes out of the liquid.

4. For a vapour-filled bubble, by sufficient temperature rise. This is called boiling.

The situation is complicated because the bubble usually contains a mixture of gas and vapour. 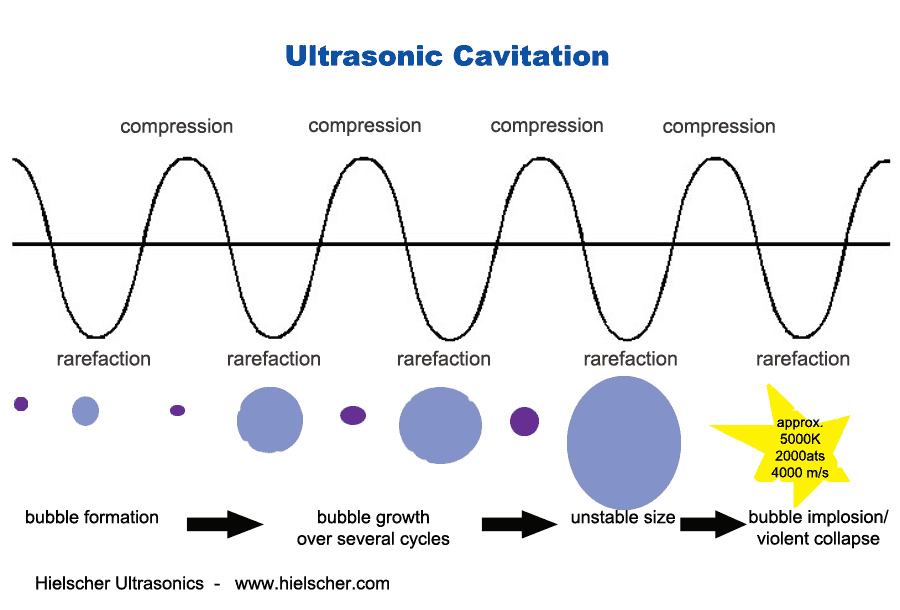 Schauberger
When what had been achieved experimentally with the test model was implemented practically, mysterious cavitation phenomena appeared, which destroyed even steel turbine blades within a short space of time.

It was only after protracted and expensive experiments with alloys that these decomposive phenomena could be sufficiently inhibited to enable the manufacture of this turbine system to begin. This was believed and is still so believed today, to be of such great service to industry and the economy, that a few companies licensed by Viktor Kaplan (because of the lucrative business opportunities) spared no material expense or intellectual effort in order to eliminate these decomposive effects, which according to measurements were equivalent to peak ressures of about 32,000 atmospheres (atm). [The Energy Evolution - Harnessing Free Energy from Nature, Cadaverine Poison in Ray-Form - Ptomaine Radiation]

With explosions vorticity (turbulence) always occurs, resulting in a reduction in the velocity of the through-flowing substance, leading in turn to cavitation, viz. the corrosion on [a] ship propeller or pressure screws in turbines. In particular when snow meltwater or glacier water is centrifugated. In such cases radar-like retroactive reactions takes place, which as detonating events, have a shattering effect. The detonation velocity can be a thousand times greater than the normal combustion velocity, which explains, for example, why the resistance to motion increases by the square in all explosion and expansion machines, which also increases by the square of the velocity of an increase in heat. It therefore acts to impede motion. [The Energy Evolution - Harnessing Free Energy from Nature, Explosion and Implosion - Expansion and Impansion]

In the second case, a marriage takes place between the residual substances. In short, the inferior product of synthesis that science calls synthetic petrol (gasoline) is produced. The moment this second, inferior synthesising process happens, a pressure recoil (cavitation) takes place due to the emission or discharge of the higher constituents (viz. the pressure reflux in high-pressure boilers). [The Energy Evolution - Harnessing Free Energy from Nature, The Liquefaction of Coal by Means of Cold Flows]

CAVITATION AS A POWER SOURCE - What Others Say
by Dale Pond, 1994?


"The collapse of the smaller vapor filled cavities (during cavitation) causes many extreme results as the intensity of the resulting shock wave may be considerably greater than the originating action." (1)

"Cavitation is mainly known for its harmful effects, namely, loss of performance, erosion, and noise.(2) However, attempts to induce and harness cavitation for useful purposes have been increasingly successful. (For instance) In high-pressure jets, cavitation has for some time now been purposely induced in order to increase their drilling, cutting, and cleaning capabilities."(3)

"... pressure of thousands of atmospheres may be developed at the moment when the cavity collapses to a small fraction of the original diameter. Such collapses are, therefore, bound to cause enormous effects, as high kinetic energies are being concentrated at very small spots."(4)

"To give an idea of the amazing effects of cavitation, it may be pointed out that after a destroyer had rushed for several hours at maximum speed, the armor plates above the propeller were pierced by a hole of the dimension of about one square foot."(5)

"While denucleated liquids may have a number of practical applications such as their use for a transmission medium in high intensity ultrasonic equipment, the use of enhanced nucleation in liquids could have far reaching possibilities. If it were possible materially to reduce the power necessary for active cavitation many of the actions utilizing the phenomenon of cavitation would become more economic and practical from the point of view of commercial exploitation."(6)