" ..vortex action is induced by differential conflict between the low and high tensions.." [Keely]

Keely
"Certain conditions of sound produce undulatory effects and other conditions quite the opposite. In organ pipes of a certain caliber very sensitive waves occur at intervals according to the character of the sound. However, on combining a number of brass tube resonators, of nine or more in number, the induction of certain chords produces high vortex action in the air in the tubes. This also caused Keely considerable difficulty when he was using his Generator, for the reversions would cause vortex action in his resonator tubes and repeatedly blew the resonator caps off, destroying the adjustments in his machine.

"In open atmosphere tuning forks produce alternate condensation and rarefaction of the air, but when a fork is placed in a tube and adjusted to thirds of the mass chord of the tube, a very different action takes place. Vibrators must be accurately adjusted to get such results; they cannot be set promiscuously in tubes and produce vortex phenomena."

"All corpuscular action in Nature is vortex motion. Progressive molecular and intermolecular disintegration of water invariably results in vortex motion of the highest order, but only peripheral. This results whether induced sympathetically or otherwise." Snell Manuscript

Keely says "All such experiments invariably resulted in vortex motion, whether induced sympathetically or otherwise. All corpuscular action in Nature is vortex motion. The undulatory theory of light is only hypothetical. The conditions of electromagnetic radiation, on the same plane of matter as light, disprove the undulatory theory in many particulars. The vortex action induced by differential conflict between the low and high tensions shows conditions analogous to those in the molecular dissociation of water into hydrogen and oxygen - in other words, vortex action of the highest order but peripheral only. Were it otherwise, the ether could not be held suspended or enclosed in the molecular or atomic envelopes." Snell Manuscript

Schauberger
[10] Tractive force: This refers to the force described hydraulically as 'Shear force' — the force that acts to 'shear off' or to dredge and dislodge sediment. In German the term for shear force is 'Schubkraft', meaning 'to push, to shove' as well as 'to shear', whereas Viktor Schauberger uses the word 'Schleppkraft'. The verb 'schleppen' means to drag, draw or pull. Viktor Schauberger's choice of 'Schleppkraft' here is quite specific, since in his view the movement of sediment is due to the sucking action of fast flowing, dense cold water downstream, rather than to the mechanical impact of the water coming from upstream. In view of this subtle change in emphasis, in lieu of the hydraulically correct term 'shear force', the term 'tractive forces' will be used. This dynamic is similar to the effect of wind on roofs, where a roof is blown off not by force from the windward side, but rather by the sucking effect of vortices created on the leeward side. -Ed. [The Energy Evolution - Harnessing Free Energy from Nature, The Biological Vacuum - The Optimal Driving Force for Machines] 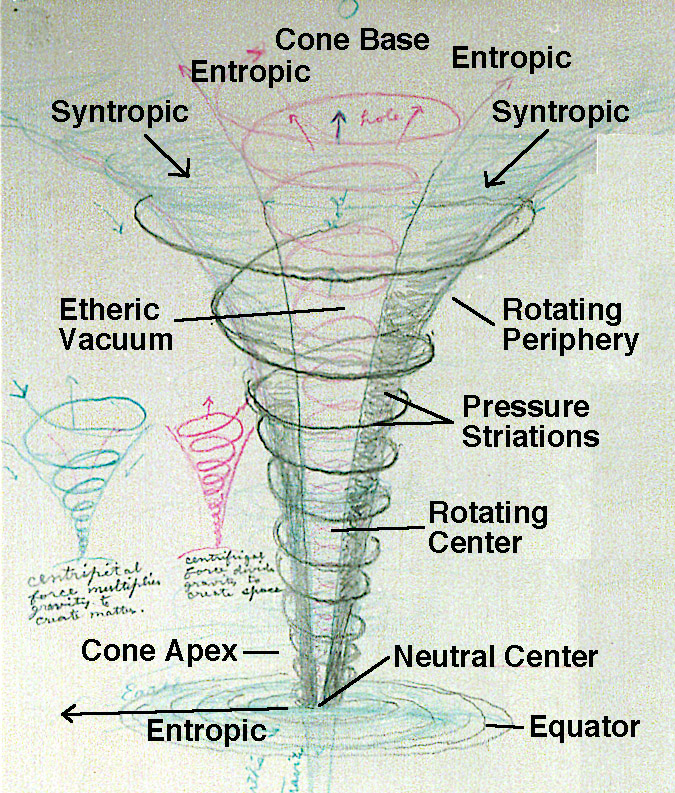 James Clerk Maxwell
"When the vortex atom is once set in motion, all its properties are absolutely fixed and determined by the laws of motion of the primitive fluid, which are fully expressed in the fundamental equations." [James Clerk Maxwell]

"I have found great difficulty in conceiving of the existence of vortices in a medium, side by side, revolving in the same direction about parallel axes. The contiguous portions of consecutive vortices must be moving in opposite directions; and it is difficult to understand how the motion of one part of the medium can coexist with, and even produce, an opposite motion of a part in contact with it. In (a mechanical) mechanism, when two wheels are intended to revolve in the same direction, a wheel is placed between them so as to be in gear with both, and this wheel is called an 'idle wheel'. The hypothesis about the vortices which I have to suggest is that a layer of particles, actng as idle wheels, is interposed between each vortex and the next, so that each vortex has a tendency to make the neighbouring vortices revolve in the same direction." James Clerk Maxwell 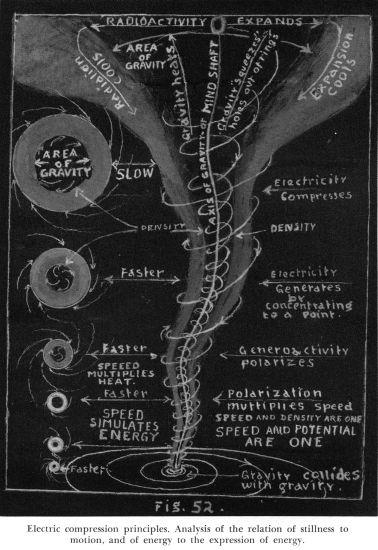 Russell
"The CREATED universe of matter is the result of concentration of Mind upon the idea of form and then the generation of power by diverting low potential into centripetal vortices in order to hold the idea of Mind into the appearance of form until form disappears through mental decentration" [Figure 12.11 - Russells Locked Potential Full Ten Octave Gamut]

Figure 3.6.1 - Tornadoes also have a Down Draft caused by its vacuous center (click to enlarge)

Man's end of the Cosmic Bridge where Motion reaches maximum.

The cube projector, shown in Fig. 62, is repeated in the cube receiver, shown herein. Motion which has been divided into pairs and thrown out into space by the projector, is multiplied in the vortices of the receiver, which corresponds to the corner reflectors of radar. Forms and sounds which are born in space are thus echoed back into space." [Atomic Suicide - Fig 63] 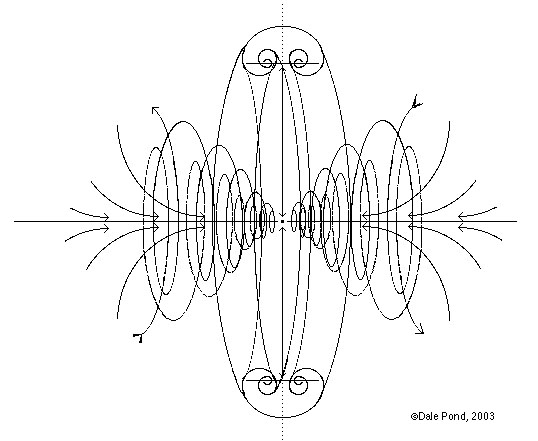