The chord (signature) of the mass of interest.

Keely
"The mass chord of any mass is that lowest or fundamental vibration to which that mass is resonant.

"As every mass consists of vibrations in thirds, balanced inharmonic equilibrium, it stands in harmonic relation to every other mass. All forms of matter and motion are thus interrelated and mutually convertible, one into the other, and through resonance, increasing or diminishing this sympathy, we can control the states of matter." (Keely)

In all molecular dissociation or disintegration of both simple and compound elements, whether gaseous or solid, a stream of vibratory antagonistic thirds, sixths, or ninths, on their chord mass will compel progressive subdivisions. In the disintegration of water the instrument is set on thirds, sixths, and ninths, to get the best effects. These triple conditions are focalized on the neutral center of said instrument so as to induce perfect harmony or concordance to the chord note of the mass chord of the instruments full combination, after which the diatonic and the enharmonic scale located at the top of the instrument, or ring, is thoroughly harmonized with the scale of ninths which is placed at the base of the vibratory transmitter with the telephone head. The next step is to disturb the harmony on the concentrative thirds, between the transmitter and the disintegrator. This is done by rotating the siren so as to induce a sympathetic communication along the nodal transmitter, or wire, that associates the two instruments. When the note of the siren becomes concordant to the neutral center of the disintegrator, the highest order of sympathetic communication is established. It is now necessary to operate the transferable vibratory negatizer or negative accelerator, which is seated in the center of the diatonic and enharmonic ring, at the top of the disintegrator, and complete disintegration will follow (from the antagonisms induced on the concordants by said adjunct) in triple progression, thus: First thirds: Molecular dissociation resolving the water into a gaseous compound of hydrogen and oxygen. Second: sixths, resolving the hydrogen and oxygen into a new element by second order of dissociation, producing what I call low atomic ether. Third: ninths, the low atomic ether resolved into a new element, which I denominate high or second atomic harmonic. All these transmissions being simultaneous on the disturbance of sympathetic equilibrium by said negative accelerator. [Snell Manuscript - The Book, page 4]

"As far as my [Keely] researches have gone, I find that there is but one condition approaching reliability, and that is in computing the intermittent periodic disturbances along a nodal vibratory transmitter the nodes of gold, silver and platina a fixed number placed at such different distances along its line, as to take up and equalize (by a certain order of vibratory transmissions) the chord masses of the nodal interferences between the triple metals of which the nodes are composed, and also the acoustic introductory impulse of whatever chord is set. This will determine the rate of their accelerated molecular oscillation, so induced beyond their normal standard, and give us some definite figures in the computing of vibration, thousands of billions of times more than those of light. [Keely, Snell Manuscript - the book, ELECTROMAGNETIC RADIATION - Snell]

"In his researches Keely discovered a system of obtaining the "chord of mass" or keynote of all substances, whether mineral, vegetable or animal. He does not give or even hint at the method by which this was obtained, and it is supposed this is the "one detail" which he kept secret until his one patentable invention was to have been completed.

"Every molecule contained in a homogeneous mass has the same harmonic oscillatory motion, which is the "chord of the mass" governed by the mass aggregation and the mass form. The "chord of the mass" is therefore the fundamental frequency of every molecule of the mass". This means that the molecule of iron in a ball bearing 1/16th inch in diameter has a different vibrational frequency than a molecule in a ball bearing 1/2 inch in diameter. It also has a bearing on crystallization forms and the variation in molecular groupings in bodies of elements, with the resultant differentiation in different masses of any one element due to different plus molecular aggregates, even although perfectly homogeneous as far as chemistry can determine.

"The molecular state of animal, vegetable and mineral matter depends upon the aggregation of their respective chord centers. It is impossible to make two coins from the same die the same in their molecular aggregation. To produce vibratory devices will require instruments more perfect than any now in existence. One of my perfected instruments shows to the eye the 'molecular effects' produced by the chord of harmony between two neutral centers. Another, connected with the "sympathizer" denotes accurately by the color of the sound (or sound combination) the number of vibrations necessary to induce `certain mechanical combination effects'."

"No condition of absolutely stable equilibrium exists in Nature. The chord of the mass changes, yet we must, through induction of resonance, learn to control the molecular forces. Keely claims to have solved this problem by the invention of a device - his "compound mechanical device" - which brings the chords of all masses within the conditions of a few simple acoustic tests.

"If I wish to disturb or bring into action the latent force in any molecular mass, I must first find what the `harmonic chord' or `mass chord' (the fundamental note) of its mass represents - and no two masses are alike. It would seem that this necessitates an infinite number of variations (entirely different scale of resonators) for different masses, but this is not the case. All masses can be resonated by the "compound mechanical device" (resonating spheres, each of which acts as a "sympathizer") which I use for the purpose, which fulfill one general condition and resonate all masses.

"To illustrate "chord of mass sympathy" Keely filled a glass chamber 40 inches high with water and placed in it three metal spheres each weighing about six ounces, and having the respective mass chords of B flat, first octave E flat, second octave and B flat, third octave, which all rested on the floor of the container.

"When B flat, first octave was sounded through the transmitter the positive end of which was attached to the cover, the sphere with the corresponding mass chord rose slowly to the top. Upon changing to the negative it descended as gently as it rose. The other spheres moved likewise on sounding their respective mass chords.

"This indicates that the conclusion reached by the Scholastic school is correct, in that: "WHEN ONE BODY ATTRACTS ANOTHER BODY, THE EFFECT IS AGGREGATE, THE RESULT OF ONE WHOLE OPERATING ON ANOTHER WHOLE, AND NOT THE SUM OF THE EFFECTS OF THE PARTS OF ONE ON THE PARTS OF THE OTHER." The Snell Manuscript

"In organ pipes, of a certain calibre, very sensitive waves occur at intervals; as according to the character of the sound evolved; but on a combination of resonators composed of brass tubes of more than nine in number, a wave of sound, induced by certain chords passing over them, produces high vortex action of the air enclosed in them. The vibration of tuning forks induces alternate condition of the air that surrounds them, if in open atmosphere; but quite a different action presents itself when the forks are exercised in resonating tubes, set to thirds of the mass chord they represent. Then high vortex action is the instant result. Vibrators cannot be set promiscuously in tubes, and get such results, any more than a musician can render a musical composition on the violin before tuning it." [Appendix I]

Keely does not give an analysis of the structure of the etheric, but from the fact that he was able to subdivide it through the same process of "triple subdivision" into "interetherons" we may assume that three interetherons, each with its etheric capsule whirling about it, existed within the envelope of the etheron, vibrating with an oscillatory frequency greater than any of the lower subdivisions.

Molecular terrestrial masses, composed of the "ultimate ether" bound latent in substance, are sympathetically drawn to the earth's neutral center according to the density of their molecular aggregation, from which must be deducted their celestial sympathetic outreach. In other words, molecular weight consists in the difference between these forces. Either one can be intensified by polar or antipolar vibrations, giving either one predominance. If the celestial (repulsive) predominates, the mass will rise, its velocity proportionate to the concentration of the dominant or the "negative thirds of its mass chords" inducing high neutral radiation together with "celestial attraction." The "terrestrial propulsive" and "celestial attractive" cause ascension and the "celestial propulsive" and "terrestrial attractive" cause descension or increased weight. [GRAVITY - Snell] 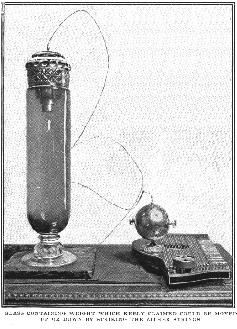 "We call this the sphere of the natural; but, when we come to higher workings of natural laws, with which we are not familiar, we designate them as "supernatural;" and scientists witnessing some of Keely's experiments, like those of overcoming gravity, of rotation of the needle of a compass,* of the disintegration of water, etc., and not believing in any workings of laws unknown to them, followed in the footsteps, still unobliterated, of the narrow-minded, bigoted persecutors of Galileo; and have denounced Keely as "a modern Cagliostro." [Vibratory Physics - The Connecting Link between Mind and Matter]