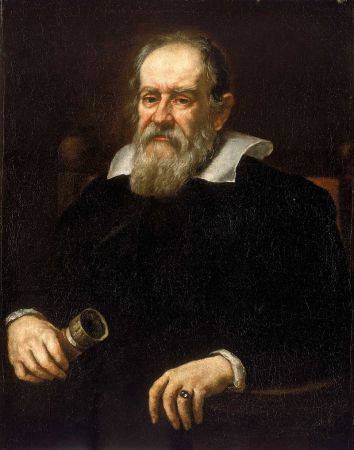 Galileo Galilei - 15 February 1564 - 8 January 1642, commonly known as Galileo, was an Italian physicist, mathematician, astronomer and philosopher who played a major role in the Scientific Revolution. His achievements include improvements to the telescope and consequent astronomical observations, and support for Copernicanism. Galileo has been called the "father of modern observational astronomy", the "father of modern physics", the "father of science", and "the Father of Modern Science". Stephen Hawking says, "Galileo, perhaps more than any other single person, was responsible for the birth of modern science." (wikipedia)

Galileo Galilei was a Tuscan astronomer, philosopher, astrologer, and physicist who is closely associated with the scientific revolution. His achievements include improving the telescope, a variety of astronomical observations, the first law of motion, and supporting Copernicanism effectively. He has been referred to as the "father of modern astronomy", as the "father of modern physics",and as "father of science". His experimental work is widely considered complementary to the writings of Francis Bacon in establishing the modern scientific method. Galileo's career coincided with that of Johannes Kepler. The work of Galileo is considered to be a significant break from that of Aristotle. In addition, his conflict with the Roman Catholic Church is taken as a major early example of the conflict of religion and freedom of thought, particularly with science, in Western society

Schauberger The first person, who had unconsciously to grapple with this disastrous development, was Galilei, whose discovery that the Earth itself moved, caused an immense uproar in secular and religious scientific circles. Galilei was forced to recant, although he recanted his recantation shortly before his death. This he did at a moment when he could no longer be harmed by those, who like past dictators used similar means to torture those whose opinion differed from theirs, believing they could re-instill faith through the agonies of torture. His opponents, however, who were just as dangerous as they were ruthless, had practically no alternative but to acknowledge this new fact. [The Energy Evolution - Harnessing Free Energy from Nature, The Life-Current in Air and Water]

Curiously enough, since then apparently no scientifically trained individual has bothered about the causes of the mysterious motion of this dung-heap Earth, and the purpose of its exceptional form of motion. This disinterest, however, was only feigned. In reality, since Galilei's discovery, people were very much on their guard in order to avert the immeasurable repercussions resulting from the revelation of: 'Why' does the Earth ceaselessly rotate about her own peculiar system of axes in an unstable state of equilibrium in so-called free space in very particular looping movements in defiance of the laws of gravity? [The Energy Evolution - Harnessing Free Energy from Nature, The Life-Current in Air and Water]

Centuries ago Galilei discovered that the Earth rotated about its peculiarly individual axis. Through the discovery that the good old Earth rotated - now recognised throughout the world - Galilei experienced all manner of difficulties, a case that is far from isolated, because all those who sift through ancient traditions and practices also have to suffer the full measure of unpleasant experiences and consequently have every reason to repay them with interest and compound interest when the right moment comes. [The Energy Evolution - Harnessing Free Energy from Nature, New Forms of Motion and Energy]

Unfortunately Galilei could not explain why the Earth actually rotates and what actually should be understood by the term its 'own' or more correctly its 'peculiar' axis. Had he also been able to pass on this information, then we would have been unlikely to have experienced this disastrous machine age. Nor would we have had to experience the lunacy of trying to build up a culture with the influences of fire and the usual forms of heat, which in Nature are used to decompose what is unsuitable for further development. And so it came to pass that the forests were senselessly sacrificed in order to produce the usual rising and expanding heat-forms, which propels flies to the ceiling in a mad rush, while freezing those on the floor. In addition the reserves of coal are as good as exhausted and those who control the meagre residual deposits no longer want to deliver the black diamonds, which are destined by Nature for higher purposes, to those to whom they were previously supplied. [The Energy Evolution - Harnessing Free Energy from Nature, New Forms of Motion and Energy]

It is common knowledge that Galilei discovered this motion and because of it, suffered a veritable martyrdom. Up to now nobody has been able to explain why secular and religious science were so hugely disturbed by this discovery. Since then there has no longer been any doubt that the Earth rotates about its own axis. Why it does so, and what purpose is served by this peculiar inclined, gyrating motion, which oscillates to and fro along two different axes has so far never been explained.[5] [The Energy Evolution - Harnessing Free Energy from Nature, The Economy Founded on Reactively Produced Energy]

Every attempt to provide an explanation was thwarted due to the strenuous resistance of those, who had already made Galilei's life difficult. This awoke in me such a interest in the true nature of this peculiar and unique motion, [The Energy Evolution - Harnessing Free Energy from Nature, The Economy Founded on Reactively Produced Energy]