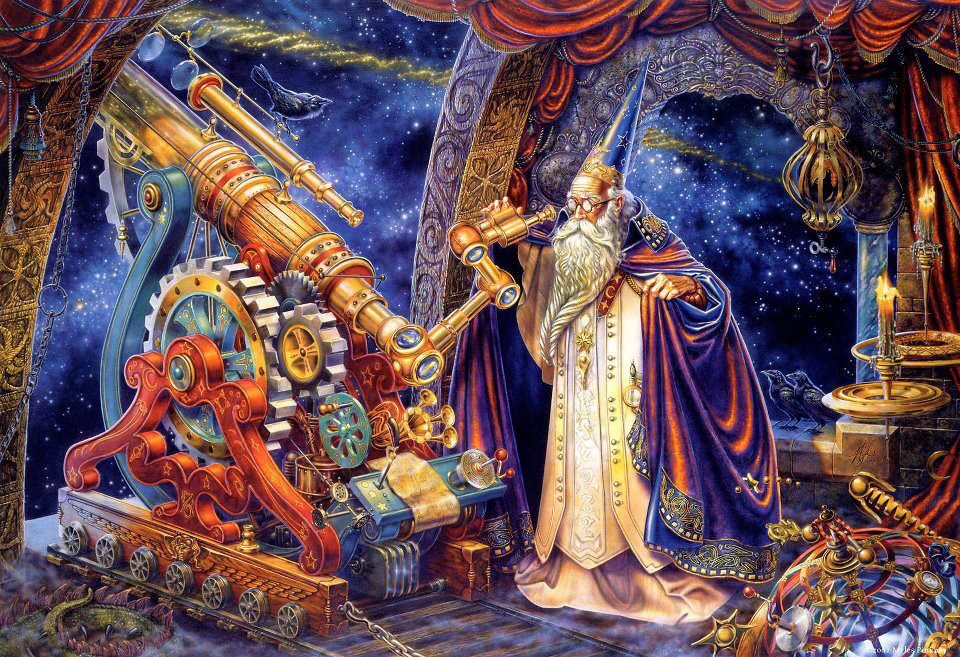 
Astronomy is a natural science that deals with the study of celestial objects (such as stars, planets, comets, nebulae, star clusters and galaxies) and phenomena that originate outside the Earth's atmosphere (such as the cosmic background radiation). It is concerned with the evolution, physics, chemistry, meteorology, and motion of celestial objects, as well as the formation and development of the universe.

Astronomy is one of the oldest sciences. Prehistoric cultures left behind astronomical artifacts such as the Egyptian monuments, Nubian monuments and Stonehenge, and early civilizations such as the Babylonians, Greeks, Chinese, Indians, and Maya performed methodical observations of the night sky. However, the invention of the telescope was required before astronomy was able to develop into a modern science. Historically, astronomy has included disciplines as diverse as astrometry, celestial navigation, observational astronomy, the making of calendars, and even astrology, but professional astronomy is nowadays often considered to be synonymous with astrophysics. (wikipedia)

Keely
"Taking the law of assimilation as the cosmical law, together with self-manifesting power as the characteristic of being, we reach a primary classification of created objects, which corresponds with that which is known as mind and matter - or rather let us say mind and that which is not mind; for there is ground for the apprehension that mind and matter do not include all that exists; and that, along with matter, ether ought to be considered as something intimately related to matter indeed, but yet not just matter. When the elements of the ethereal medium are regarded as truly and simply material however small and light they may be, the elasticity and pressure which must be assigned to that medium in order to admit of the velocity of light, are altogether out of the harmony of things; and wholly incredible, especially when confronted with the phenomena and the theory of astronomy. Thus, to justify the velocity of light on the same principles as those of sound, in various material media, the ethereal pressure must be 122,400,000,000 times greater than that of the atmosphere - which is incredible, says Macvicar." [Law of Assimilation]

Schauberger
[7] To give a greater understanding of events at Sais, that ancient Egyptian city in the Nile delta, The Secret Doctrine by H P Blavatsky relates: "...And how little Herodotus could tell is confessed by himself when speaking of a mysterious tomb of an Initiate at Sais, in the sacred precinct of Minerva. There, he says 'behind the chapel is the tomb of One, whose name I consider it impious to divulge... In the enclosure there are large obelisks and there is a lake near, surrounded with a stone wall in a circle. In this lake they perform, by night, that person's adventures, which they call mysteries. It is well to know that no secret was so well-preserved and so sacred with the ancients as that of their cycles and computations. From the Egyptians down to the Jews it was held as the highest sin to divulge anything pertaining to the correct measure of time. It was for divulging the secrets of the Gods, that Tantalus was plunged into the infernal regions; the keepers of the sacred Sybilline Books were threatened with the death penalty for revealing a word of them.' The Secret Doctrine, Vol II, page 396. While not directly related to the Seven Veils of Sais, the following quotation from The Secret Doctrine, Vol. III, p.132, may afford further insight into what was hidden behind them. "An impenetrable veil of secrecy was thrown over the Occult and Religious Mysteries, after the submersion of the last remnant of the Atlantean Race, some 12,000 years ago, lest they should be shared by the unworthy, and so desecrated. Of these Sciences several have now become exoteric — such as astronomy, for instance, in its purely mathematical and physical aspect." Ed. [The Energy Evolution - Harnessing Free Energy from Nature, The Life-Current in Air and Water]

The mathematical scales, if followed out regardless of other laws which rule in music, would read like a chapter in Astronomy. They would lead us on like the cycles of the moon, for example. In 19 years we have 235 moons; but the moon by that time is an hour and a-half fast. In 16 such cycles, or about 300 years, the moon is about a day fast; this, of course, is speaking roughly. This is the way seemingly through all the astronomical realm of creation. And had we only the mathematical ratios used in generating the notes of the scale as the sole law of music, we should be led off in the same way. And were we to follow up into the inaudible region of vibrations, we should possibly find ourselves where light, and heat, and chemical elective motions and electric currents are playing their unheard harmonies; or into the seemingly still region of solid substances, where an almost infinite tremor of vibrations is balancing the ultimate elements of the world. Music in this case would seem like some passing meteor coming in from among the silent oscillations of the planetary bodies of the solar system, and flashing past with its charming sound effects, and leaving us again to pass into the higher silence of those subtle vibrations to which we have referred, having no infolding upon itself, no systematic limit, no horizon. But music is not such a passing thing. Between the high silence of these intense vibrations, and the low silence of oscillating pendulums and revolving planets, God has constituted an audible sphere of vibrations, in which is placed a definite limit of systematic sounds; seven octaves are carried like a measuring line round twelve fifths; and motion and rest unite in placing a horizon for the musical world, and music comes [Scientific Basis and Build of Music, page 39]

Paracelsus
"Astronomy contains in itself seven faculties or religions; he who does not know them all is unworthy to be called an astronomer. Let each man remain in that religion or faculty wherein he occupies himself; let the astologer deal with astrology; he who treats of the religion of magic, let him remain exclusively a magus; he who is concerned with divination, let him remain a diviner; he who regards nigromancy, a nigromantic; he who studies signatures, a signator; he who is devoted to the uncertain arts, an incertus; he who investigates matter, a physicist. Let not the astronomer deny that magic is astronomy, nor yet refuse the name to divination, nigromancy, and the rest. All these things are comprehended under astronomy as much as is astrology itself. They are natural and essential sciences of the stars, and he who is acquainted with them all, he is worthy to be called an astronomer. But albeit these sciences are sisters, they have heretofore been ignorant of their relationship, which it is important to recognise, so that one may not be despised by the other." [Paracelsus. Hermetic Astronomy.]