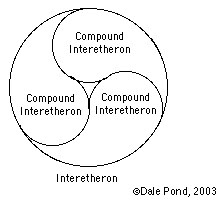 Keely
Keely does not give an analysis of the structure of the etheric, but from the fact that he was able to subdivide it through the same process of "triple subdivision" into "interetherons" we may assume that three interetherons, each with its etheric capsule whirling about it, existed within the envelope of the etheron, vibrating with an oscillatory frequency greater than any of the lower subdivisions.

"The attractive property of the interetheron for streams of coincidence (the nodes of resonant vibrations) is not a magnetic force exercised by itself. The magnet is susceptible to only certain forms of aggregate matter iron for instance and its preparations." [ETHER - Snell]

"The interetheron consists of three component parts which are true simples, inasmuch as they defied any further analysis at Keely's hands. These three components are the three individualized neutral centers, oscillating and vibrating about a "center of coincidence" set up by their vibratory nodes, which assumes control of them through its affinity for their vibratory nodes. Whether any etheric capsule surrounds any or all of these three component neutral centers as they vibrate and oscillate about the fourth and controlling neutral center of the interetheron, is somewhat in doubt. But since Keely's subdivisions he believed were brought about through vibratory disintegration of the etheric capsules, and he was able to subdivide the sixth subdivision into the seventh, such would appear to have been the case.

"The fundamental mode of vibration in the interetheric is the dominant, the diatonic third of the mass chord, the same as in the etheric.

"Keely states this medium transmits the vibrations of gravity, which he defines as "transmissive interetheric force under immense vibration." [Snell Manuscript]

"No process of mathematics can comprehend or measure such minuteness, for it transcends both logic and computation. Molecules, intermolecules, atoms, interatoms, etherons, interetherons, can be represented by progressive degrees of tenuity, although the degree of tenuity of the latter four is such as we cannot comprehend because we have not and cannot sense them, but the neutral center, with its marvelous properties, its infinite power, is as incomprehensible to our minds as the aggregate power, mass and extension of the objective Universe." [Snell Manuscript]