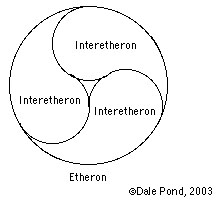 Particles or centralizations consonant with the etheric subdivision of matter.

Keely
Keely does not give an analysis of the structure of the etheric, but from the fact that he was able to subdivide it through the same process of "triple subdivision" into "interetherons" we may assume that three interetherons, each with its etheric capsule whirling about it, existed within the envelope of the etheron, vibrating with an oscillatory frequency greater than any of the lower subdivisions.

"Keely does not define the structure of the interatom, but from the fact that the "triple" vibrations cause it to further subdivide, we may assume it to consist of portions arranged in the same manner as in the lower subdivisions. Certain it is that Keely found the interatomic to subdivide into three "etherons" of the fifth subdivision. We may therefore conclude that the internal structure of the interatom is fundamentally the same as that of the first, second and third subdivisions. Its fundamental vibratory mode is the same as that of the atomic subdivisions the harmonic or true fifth of the mass chord. Its vibratory frequency, however, is higher than any of the preceding. The interatom is subject to the general laws of mass and is ponderable." Snell Manuscript

"No process of mathematics can comprehend or measure such minuteness, for it transcends both logic and computation. Molecules, intermolecules, atoms, interatoms, etherons, interetherons, can be represented by progressive degrees of tenuity, although the degree of tenuity of the latter four is such as we cannot comprehend because we have not and cannot sense them, but the neutral center, with its marvelous properties, its infinite power, is as incomprehensible to our minds as the aggregate power, mass and extension of the objective Universe." [Snell Manuscript]