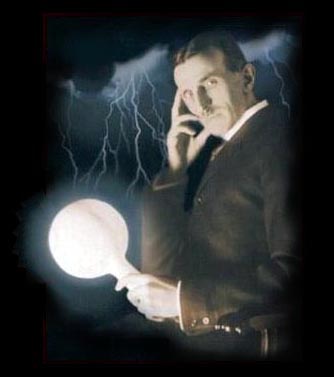 "Perhaps it is better in this present world of ours that a revolutionary idea or invention instead of being helped and patted, be hampered and ill-treated in its adolescence - by want of means, by selfish interest, pedantry, stupidity and ignorance; that it be attacked and stifled; that it pass through bitter trials and tribulations, through the heartless strife of commercial existence. So do we get our light. So all that was great in the past was ridiculed, condemned, combated, suppressed - only to emerge all the more powerfully, all the more triumphantly from the struggle." [Nikola Tesla, 1905]

Tesla Commemorative Medallions
An Interview with Nikola Tesla
Bearden on Tesla and EM Source Charge
Tesla - Electricity from Space
Tesla - ON THE DISSIPATION OF THE ELECTRICAL ENERGY OF THE HERTZ RESONATOR
Tesla's Patents
Tesla Other Patents
Tesla Patents 101-111
Tesla Patents 51-100
Turbine - 1061206
Tesla articles and books
Excellent article detailing the Cayce readings given for Nikola Tesla and Townsend Brown
The Tesla Collection - The "Tesla Collection" is the most comprehensive compilation of newspaper and periodical material ever assembled by or about Nikola Tesla.

Nikola Tesla is widely recognized as the father of the modern electrical and radio age having invented them both. Other significant contributions were AC current and fluorescent lighting. Without these and other inventions modern society would not exist.

While George Westinghouse and the companies he owned were among the first to fully develop and exploit the advantages of the Alternating Current system devised by Tesla, Edison and Morgan were much less supportive of the brilliant inventor. Tesla was actually employed by Edison when he first came to the United States, who persuaded him to redesign Edison's existing Direct Current generators and motors for a promised bonus of $50,000. Tesla did so, leading to great improvements in efficiency, only to have Edison refuse to pay the bonus, claiming the entire thing was a joke. Tesla resigned immediately.

Not only did this ensure Tesla's lifelong distaste for Edison, Tesla's own Alternating Current system was in direct competition with Edison's DC system, in which Edison had a massive capital investment. This dispute between AC and DC erupted into the famous "War of the Currents" in which each side attempted to prove their system superior. Edison was unable to do honestly claim superiority on technical grounds, because DC power could not be transmitted long distances at safe voltages, so he did the next thing that came to mind: Try to make AC into a threat to public safety. Edison subsequently invented the electric chair and persuaded the State of New York to use it to execute criminals. With AC equipment of course. This first use of electricity for capital punishment was horrifying, and the condemned man had to be zapped twice. Edison also organized public demonstrations, including the electrocution of an elephant, all to try to prove that AC is dangerous.

In fact, the very nature of DC makes it more dangerous and less efficient that AC. Since the current is continuous, any contact with a DC source will cause muscles to clench continuously, making it very difficult to let go. So Edison was incorrect on both efficiency and safety, and today multi-phase Alternating Current, as invented by Tesla and developed by Westinghouse, is the standard for industrial, residential, and commercial electrical systems. When one examines the historical record, the assertion that this development was supported by Edison can be seen to be nothing short of absurd. I would appreciate your correction of this error.

"While working for RCA under the name "Terbo", Tesla maintained his two penthouse suites atop the Hotel New Yorker. One penthouse was his living quarters, the other a full-scale research laboratory. Tesla designed and built small compact and portable aether energy receivers, a developmental path, which he pursued to his passing. Tesla had long investigated the use of pure dielectric field energy, a stream of aether whose individual pulsations were so very ultra short that science had never found a means to harness the energy impulses. Tesla later held the opinion that dielectric current was composed of radiant particles, aetheric in nature. He therefore sought natural sources in which native dielectric fields could be used as they were, without the need for mammoth voltage "shocks" to stigmata aetheric currents. Tesla knew that if dielectric aether streams could be directly engaged, a true world of the future would be in his grasp. Furthermore, the mass-production of thousands and ten of thousands of such power receivers would be an unstoppable army. An army of miniatures, which could never be torn down.

The implications were fathomless. Tesla had found a truly new and wonderful approach to an old problem. Once because his technology had not yet grown to the level where this was possible, he had to settle for impressing the naturally prolific aether streams with "extra" pulsations. The Transmitter method was costly, gargantuan, and an easy target for those who hated the notion of a future world where dreams rule humanity. Dielectric energy fascinated Tesla. It was everywhere, a natural emanation whose potentials far out proportioned conventional notions of power. Indeed, the early conception of natural radioactivity as an energetic source was nothing in comparison to the potential power inherent in dielectric streams. The new technology would use ultra-short pulsing aether streams, energies that occupied most of his latter press conferences in latter years. Study had convinced Tesla that the apparently smooth and native force characteristic of dielectric field energy was actually a particulate flux, a succession of ultra-short impulses. The derivation of such an impulse train would solve all energy needs for eternity with an elegance far out-reaching his own."

Nikola Tesla writes: "I have disintegrated atoms in my experiments with a high potential vacuum tube I brought out in 1896 which I consider one of my best inventions." [Radio Power will Revolutionize, Modern Mechanix and Invention, July, 1934]

"When I was about twenty, I contracted a mania for gambling. We played for very high stakes; and more than one of my companions gambled away the full value of his home. My luck was generally bad, but on one occasion I won everything in sight. Still I was not satisfied, but must go on with the play. I lent my companions money so that we might continue, and before we left the table I had lost all that I had won and was in debt.
"My parents were greatly worried by my gambling habits. My father especially was stern and often expressed his contempt at my wanton waste of time and money. However, I never would promise him to give up gambling, but instead defended myself with a bad philosophy that is very common. I told him that, of course, I could stop whenever I pleased, but that it was not worth while to give up gambling because the pleasure was more to me than the joys of Paradise.
"My mother understood human nature better and never chided. She knew that a man cannot be saved from his own foolishness or vice by someone else’s efforts or protests, but only by the use of his own will. One afternoon, when I had lost all my money, but still was craving to play, she came to me with a roll of bills in her hand — a large sum of money for those times and conditions — and said, “Here, Niko. Take these. They’re all I have. But the sooner you lose everything we own, the better it will be. Then I know you will get over this.”
"She kissed me.
"So blinded was I by my passion that I took the money, gambled the whole night, and lost everything, as usual. It was morning when I emerged from the den, and I went on a long walk through sunlit woods pondering my utter folly. The sight of nature had brought me to my senses, and my mother’s act and faith came vividly to mind. Before I left the woods, I had conquered this passion. I went home to my mother and told her I never would gamble again. And there never has been the slightest danger of my breaking the promise.” – Nikola Tesla
“Making Your Imagination Work For You.” By M. K. Wisehart. American Magazine, April, 1921.