"There are three kinds of electricity, the harmonic and enharmonic, which, with their leader, the dominant, form the first triple. Their sympathetic associations evolve the energy of matter. The dominant is electricity luminous or propulsive positive. The harmonic, or the magnetic, which is the attractive, with its wonderful sympathetic outreach, is the negative current of the triune stream. The enharmonic, or high neutral, acts as the assimilative towards the reinstatement of sympathetic disturbance. In electric lighting, the velocity of the dynamos accumulates only the harmonic current by atomic and interatomic conflict transferring one-two hundred thousandth (1/200,000) of the light that the dominant current would give, if it were possible to construct a device whereby it could be concentrated and dispersed. But this supreme portion can never be handled by any finite mode. Each of these currents has its triple flow, representing the true lines of the sympathetic forces that are constantly assimilating with the polar terrestrial envelope. The rotation of the earth is one of the exciters that disturbs the equilibrium of these sensitive streams. The alternate light zone being ever followed by the dark zone, holds the sympathetic polar wave constant in its fluctuations. This fact may be looked upon as the foundation of the fable that the world rests upon a tortoise. The rotation of the earth is controlled and continued by the action of the positive and negative sympathetic celestial streams. Its pure and steady motion, so free from intermitting impulses, is governed to the most minute mathematical nicety by the mobility of the aqueous portion of its structure, i.e., its oceans and oceans' anastomosis. There is said to be a grain of truth in the wildest fable, and herein we have the elephant that the tortoise stands on. The fixed gravital centers of neutrality, the sympathetic concordants to the celestial outreach, that exist in the interatomic position, are the connective sympathetic links whereby the terrestrial is held in independent suspension. We cannot say that this corresponds to what the elephant stands upon but we can say "This is the power whereby the elephant is sympathetically suspended." Keely Snell Manuscript [See Bearden on Tesla and EM Source Charge]

"The power of attractive vibration of the solar forces is the great coincident towards which the terrestrial magnetic sympathetic flow is diverted. This force is the celestial current that makes up the prime third of the triple association." [Keelys Contributions to Science]

"The earth's rotation excites and disturbs the equilibrium of the three sympathetic streams, of which the material manifestations are the three forms of electricity." [FORCES CONTROLLING THE EARTH]

See Part 14 for expanded conversation on Keely's Triplets of Energy. We must take special note here of the nine aspects of electricity mentioned above. This would indicate a number of things one being Keely did not recognize electricity as a flow of electrons as orthodoxy does. The figure below shows 1 - Harmonic - Electricity, magnetic, attractive is the negative current. This is the electricity currently used. 2 - Enharmonic - Electricity or High Neutral, acts as assimilative to balance. "The enharmonic portion of the electric current carries the power of propulsion that induces disturbance of negative equilibrium." [DISTURBANCE OF EQUILIBRIUM - Snell] 3 - Dominant - Electricity is the luminous or propulsive positive. This is where the light from an electric spark comes from. 4 - Graphic depiction of 'apparent' or seeming compound electric current.

The relations of the components of the electric streams are: Dominant E flat, harmonic A flat, enharmonic C double flat.

The keynote of electromagnetic sympathy in "transmissive combinations" is:

"Electricity is the attractive force of this universe of integrating matter." Russell, The Universal One 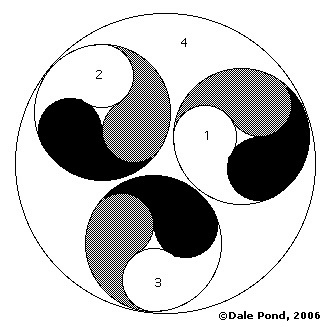 
"Keely has discovered and was the first to demonstrate that electricity has never been handled; that it is not merely a force or a form of energy, - that it is matter; and that what we call electricity, and have diverted for commercial use in electric lighting, is but one of the triune currents, harmonic, enharmonic, and diatonic, which are united in pure electricity; that the enharmonic current seems to be sympathetically and mysteriously associated with the dominant current; and that the dominant current can no more be brought under control than can the lightning itself. The diversion of the dominant current would mean destruction to any mechanical medium used for that purpose, and death to the operator. The intense heat evolved by the electric stream Keely attributes to the velocity of the triple subdivision at the point of dispersion, as each triple seeks its medium of affinity. Sudden unition induces the same effect; but demonstration shows that the concentration of this triple force is as free of percussion as is the breath of an infant against the atmosphere; for the three currents flow together as in one stream, in the mildest sympathetic way, while their discharge after concentration is, in comparison to their accumulation, as the tornado's force to the waft of the butterfly's wing. The enharmonic current of this triple stream, Keely thinks, carries with it the power of propulsion that induces disturbance of negative equilibrium; which disturbance is essential to the co-ordination of its flow, in completing the triune stream of electricity. When this fluid is discharged from the clouds, each triplet or third seeks its terrestrial concordant, there to remain until that supreme law which governs disturbance of equilibrium again induces sympathetic concordant concentration, continuing to pass through its evolutions, positively and negatively, until the solar forces are expended." [Keelys Contributions to Science]