"Positive electricity is the father-light, which gravitates toward a point of rest which centers all creating things.

"Positive electricity winds the light of motion into dense solids around points of still magnetic Light. It compresses motion into incandescent spheres surrounded by the vacuity of negative electricity." Russell, The Secret of Light, page 148

"Positive electricity is the generative energy of thinking Mind registered in light units which are gravitationally or centripetally resisting magnetic influence by expelling it. The light units are contracting, registering their contraction and their resistance to magnetism in heat. Their electric orbital motion is toward a closing spiral in one plane.

"Positive electricity is that state of motion in which centripetal force dominates centrifugal force."

"Positive electricity is the plus half of electromagnetically charging light units which are seeking higher pressure zones."

"Positive electricity is an endothermic, contractive force which is actively absorbing a comparatively large quantity of generative light units of heat which raises its potential, and is expelling a smaller number of them, devitalized into magnetic radio-active emanations, thus slightly lowering its potential." Russell, The Universal One, Book 02 - Chapter 02 - Electricity and Magnetism

As we thus unfold Nature's processes and her way of working you will gradually comprehend that there is no place in God's Cosmogony for such a concept as negative electricity, or negatively "charged" bodies.

"We live in a universe in which all creating, charging, polarizing, compressing and heating bodies manifest LIFE, and all discharging, depolarizing, expanding and cooling bodies manifest DEATH. One cannot say that a dying body is negatively charged, for a charging body is positive. It is living. Your car battery can be charging from its generator, and simultaneously discharging, from its use, but if you had no generator in your car the battery would discharge its charge until electricity ceased in it. While it is dying you would not even then say that it is negatively charged, for it would still be positively charged until it could no longer move. We do not say "negative sound" or "silent sound" when it is ceasing, or has ceased. Nor do we say "negative warmth," or "cold warmth," when a hot iron is cooling, or has cooled. Nor do we say "negative life," when a man is dying, or is dead."

"Electricity compresses and ceases to compress, but we do not then say that it is "negatively compressed." It is for that reason we put a positive sign wherever an electric condition is existent, but there is no need for any sign unless there could be two which indicate sex, and two which indicate charge and discharge. When motion ceases electricity ceases. It is not then negative electricity - as death is not negative life. In all of these charging and discharging effects the tensions of the color spectrum parallel the tensions of electric potential. That is why they should be considered together.

If this change in our thinking is true to Nature, there can be only one kind of electricity - positive electricity, meaning "the power to charge or compress. [Atomic Suicide, page 95-96] 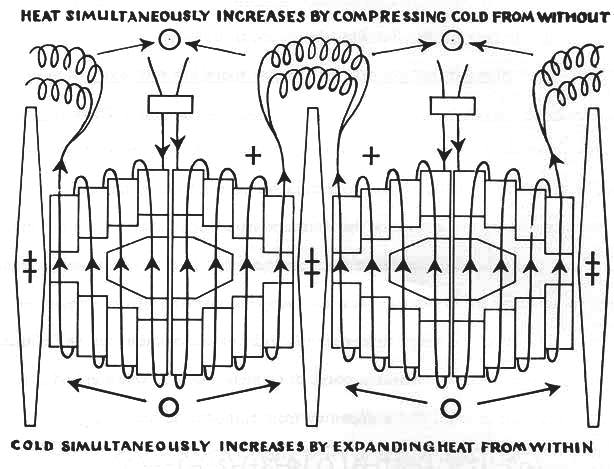