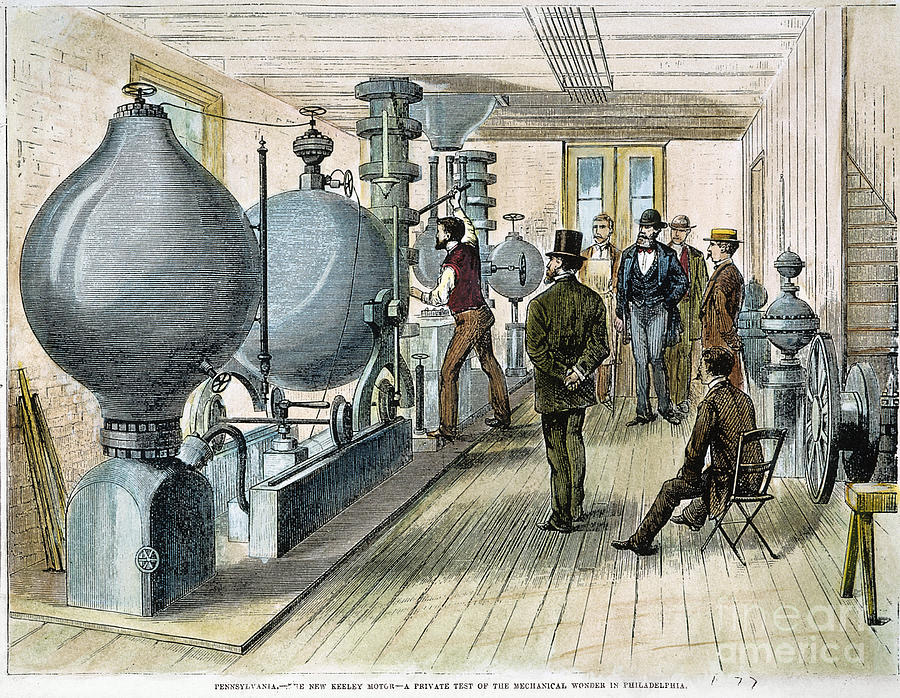 
The device pictured above is one of Keely's original unsophisticated etheric generators. Today we might call this a plasma generator. His generator was not the same as his Liberator apparently a different device. They are not the same because we find both terms used in one sentence:

Keely
"After a succession of interesting but laborious experiments, he produced in March 1885, what he termed a liberator, which could be operated in conjunction with the generator, and was a vast stride in advance of anything accomplished hitherto." [Keelys Change of Base]

"The system of arranging introductory etheric impulses by compound chords set by differential harmonies is one that the world of science has never recognized. Beyond disintegration lies dispersion, and it is as easy to disperse as to disintegrate."

His first system requires introductory mediums of differential gravities air as one, and water as the other, to disturb equilibrium and liberate the etheric vapor. This subdivision only reaches the interatomic position and the "atomic and molecular leads" were submerged in the Generator he then used. He could not go beyond the atomic with his instrument and could not dispense with water until the Liberator was invented. In his first system he did not reach full maximum line of vibration. His first system embraced Generator, Engine and Gun.

His second system he considered complete as far as liberation of the ether is concerned but was not perfected so as to assure safety to the operator. His sundry devices for indicating and governing the vibratory etheric circuit also left much to be desired.

His third system embraced aerial and submarine navigation. He was then completing an experimental sphere intended to test the combination of the positive and negative in rotary action. [DISINTEGRATION OF MATTER - THREE SYSTEMS]

With his Generator, which was invented for the purpose of multiplication of vibrations, he secured higher frequencies by disturbance of equilibrium of mediums of different specific gravities, air as one, water as the other.

In the disintegration of water in his "Liberator" he produced the "etheric order of ozone." This he is said to have used in a "carbon register" to produce a high vibratory circuit that proved sufficient to break up cohesion, which he states is simply molecular magnetism. At that time he used, in molecular dissociation, one tuning fork of 620 per second, setting chords on the first octave, in atomic separation, two forks, one of 620 and one of 630, setting chords on the second octave, and in etheric separation used three forks, one of 620, one of 630 and one of 12,000, setting chords on the third octave. [VIBRATORY MULTIPLICATION]

He has again reduced in size the instrument producing the force. From 1882 to 1884 the "Generator" was six feet long and corresponding wide and high, but failing to make the arrangement automatic upon which its mechanical usefulness depended, Keely found a new standard for research in an experiment often made by himself, but never before successful, which resulted in invention in 1885 of the "Liberator" not so large as a lady's small round worktable. He made astonishing progress with this beautiful piece of vibratory mechanism, so as to combine the production of the power, operation of the cannon, his engine and his disintegrator in a machine no larger than a dinner plate and only three or four inches in thickness. This was completed in 1886, up to which time his experiments were upon the principle of sympathetic vibration, for liberating a vapory or etheric product. His later experiments were another modification of vibratory sympathy, and the size of the instrument used now, 1888, for the same purposes is no larger than an old fashioned silver watch. A pressure of 30,000 lbs. to the square inch in raising of the lever, and all other operations, without one ounce of pressure in any part of the apparatus, are effected by the ether. The force is transmitted along a wire of platinum and silver. Keely has named this new modification "Negative Attraction." The two forms of force with which he has experimented and the attendant phenomena, are exactly antithetical. It is by changing the vibrations of the cosmic ether that Keely releases this energy. Dr. Dupuy, of New York, experimented along these lines for many years, but without success to the degree Keely had. [underline added] [Snell Manuscript - The Book, page 3]

Keely's difficulties with his old generator of etheric force grew out of the fact, in part, that the vaporic power produced was so humid that he could not, in utilizing it, obtain its theoretical value in work. He has overcome this entirely by dispensing with water and has attained a success beyond that which he originally anticipated when he abandoned his original line of experiment. (He was obliged to return soon to his former method, for he found a difficulty even more obstinate to contend with.) [Snell Manuscript - The Book, page 3]

"The vapor produced from the Liberator was free of all humidity, of greater tenuity, giving perfect and high lines of action. Its plan was conceived during his desperate struggle to effect a simultaneous action between the molecular and atomic leads, necessary for continuation of energy release and was suggested by the saying "Nature works with dual force, but at rest she is a unit." [MECHANICAL INVENTIONS AND INSTRUMENTS]

Electric Generator
Keely
"In electric lighting, the velocity of the dynamos accumulates only the harmonic current - by atomic and interatomic conflict - transferring one-two hundred thousandth (1/200,000) of the light that the dominant current would give, if it were possible to construct a device whereby it could be concentrated and dispersed." [Snell Manuscript]

"''A dynamo-electric machine is placed at any given spot; its object, being put in action, is to withdraw from the earth its neutral electricity, to decompose it into its two conditions and to collect, upon accumulators, the electricity thus separated. As soon as the accumulators are charged, the electricity is disposable; that is, our lamps can be lighted." [Vibratory Physics - The Connecting Link between Mind and Matter]

Schauberger
Professor Sauerbruch was unaware that this vacuum comes into being through the planetary movement of the blood. Had he known, then medicine would have taken a completely different course.

I was further able to prove that because contemporary machines operate using centrifugence, resistances to motion with a reactive function[12] are

[11] Here the German word is 'Qualitatstoff', which literally means 'quality-matter, or substance'. With this Viktor Schauberger intended to describe a higher, 4th or 5th dimensional magnitude of pure quality as a thing in itself and as the driving force in the raising of quality of whatever kind as a 'quality-producer' or 'quality-generating substance' or energy. The English expression term 'qualigen' used here, is a contraction of the two words 'quality' and 'generator'. — Ed.
[12] Active and reactive energies, temperatures, etc.: 'Active' essentially relates to the more physical dimension, to what is outwardly physical and perceptible, physically palpable, gravitationally affected or oriented, and life-negating, i.e. to energies that tend to curb, limit and brake life, evolution and development. 'Reactive' on the other hand relates to more metaphysical dimensions, to what is inwardly physically intangible, levitationally affected or oriented, and life-affirming, i.e. to energies that tend to foster, re-animate and accelerate life, evolution and higher development. - Ed. [The Energy Evolution - Harnessing Free Energy from Nature, The Biological Vacuum - The Optimal Driving Force for Machines]

the absolutely indispensable resistance for all motion. As the formative velocity rises, the resistance increases commensurately in order to provide the additional frictional (resisting) surfaces required by the accelerating matter. The actual loss of formative energy associated with this amounts to about 4%, i.e. in this case approximately 96% of the formative energy (= magnetism streaming upwards at enormous speed = levitism) is freed, which sucks up its generating device and a portion of its immediate environs in its wake. In other words, the 'all attracting' comes into being and becomes active with elemental ur-force. [The Energy Evolution - Harnessing Free Energy from Nature, Magnetism is the Function of Levitism and Electricism is the Function of Gravitism]

If on the other hand a tripolar mass is split up by suction-intensifying and temperature-reducing dynamic influences, then the true creative substance (sweet matter) will be exposed to revitalising (cooling) temperatures. In this case the formative (levitative) sweet-matter becomes free, unipolar and so highly active that it binds, consumes and digests the oxygen (fertilising substance), which has become passive under this other dynamic influence. The end product of this magnetolytic dissociation is the predominantly magnetically charged ion, whose original formative and levitative force, which as everything else in Nature is to be understood as an indirect effect, can be intensified by up to 96%. Imbued with levitative force, these ions suck up the inferior matter and the generating device in their wake with elemental ur-force and encounter the natural and therefore higher-grade forms of inwardly falling (impanding) and concentrating (condensing) heat and light moving in the opposite direction. The product of this partial concentration, which has been solidified through these higher-grade counter-influences is what is known as 'growth', (see fig. 15) [The Energy Evolution - Harnessing Free Energy from Nature, Magnetism is the Function of Levitism and Electricism is the Function of Gravitism]

destructive force. That is to say, there is no machine, no transport system, temperature or light generating plant, which does not make use of developmentally dangerous axial->radial impulses. The same applies to all the operational procedures of forestry, agriculture, water and energy supply. All the watercourses and drinking-water plants are being systematically destroyed not only by this development-disrupting motion, which activates electrolytic dissociative processes, but also by official rules and regulations. And if this were not enough, this nation-destroying motion and way of thinking is being enforced by law! [The Energy Evolution - Harnessing Free Energy from Nature, Magnetism is the Function of Levitism and Electricism is the Function of Gravitism]

Ramsay
in their birthplace - F A C, C E G, G B D. Indeed in their birth not only is it so, but still further, the top note of the first chord is the root and generator of the third. They are linked in generative continuity. [Scientific Basis and Build of Music, page 49]