KEELY'S ETHERIC VAPOR
HE EXPLAINS INVENTION TO A REPORTER.
THE INVENTOR SATISFIED WITH HIS SANDY HOOK EXPERIMENTS
ANOTHER PUBLIC TEST PROMISED SOON.


NYT - PHILADELPHIA, Sept. 21, 1884- John W. Keely, the inventor of the Keely motor, sat in his dressing gown this evening in the second story of his residence on Oxford-street reading after demonstrating the new motor gun on Saturday in the presence of a party of Government officials at Sandy Hook Proving Ground. A satisfied expression was on his face. A reporter of the Press was cautiously examining a vaporic vibrator that lay on the table in the middle of the room. Laying down his paper the inventor wheeled around in his chair, and, after studying for a moment, broke the silence that he has so persistently maintained, and, for the first time in several years, communicated his thoughts to a newspaper man.

"My experimenting days are over," he said. "This will develop my active enterprise. Complete success is very near at hand. My experiments at Sandy Hook Proving Ground demonstrated that my vaporic force is a fact and not a mere creation of fancy, as many persons have persisted in declaring. I am now able to produce a power of projection thrice greater than that of gun power, and there is no limit to this force. My motor will be completed in less than two months and I will then make a public exhibition of its wonderful power, which are already in a position to manifest themselves. The adaptation of my force to gunnery is positively assured. I can apply it with more effect than that of nitro-glycerine." 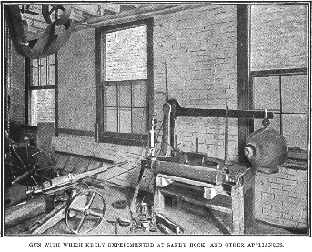 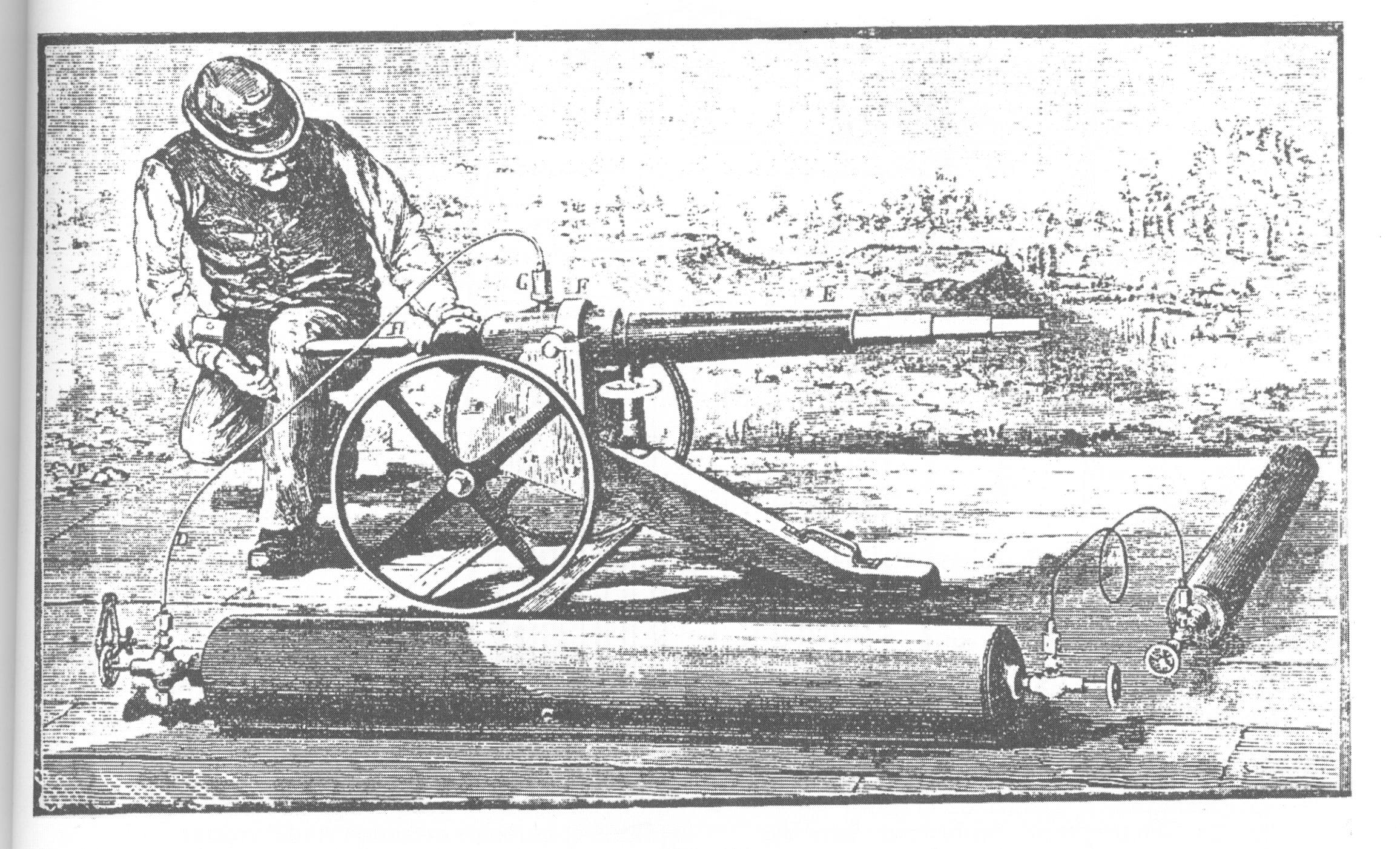 
The inventor paused and took out of a satchel what looked like a policeman's billy. "This," he said, "is what I call a vibrator. It is a hollow coil of steel of the finest quality. In one end is an orifice, by which it is attached to the gun. It is the most peculiar piece of steel in the world. Listen," and the inventor tapped one end of the coil twice, sharply, upon the floor and held it to the ear of the reporter. "Do you hear anything?" The reporter did hear something. The steel cone was humming in a very high key. The noise was like that of a tuning fork. Taking the core in his hand, the reporter found that it was quivering from one end to the other. Mr. Keely continued: "It hums, don't it? No other piece of metal in the world of similar shape will hum at all. See if it does," and he tapped another hollow bar of steel on the floor and held it to the reporter's car. Not a sound was audible, not a quiver could be detected. "That steel bar," said Mr. Keely, "was the beginning of my motor. By means of it I stumbled on my discoveries. For seven years I have kept flowing through that core a stream of etheric vapor. The action of the vapor has been to affect the relations of the molecules and to alter to a certain extent their conditions. For this reason it has become subject to these vibrations, which are excited in the manner I have shown you. There has been no apparent outward change in the steel. Its weight is the same as before, but it is in the process of silent dissolution. Were I to pass [ether] through it for 20 years longer, this etheric vapor, it would crumble into nothingness, be transformed into the most impalpable dust, or whatever you may choose to call it. The steel core is necessary for the promulgation of the projecting force of the etheric vapor when applied to gunnery. When the vapor was first allowed to flow through the core of steel, the vibration were scarcely audible. Gradually they increased in volume, and the noise became more and more audible. The vibrations through it have averaged 300,000 per second. It has sufficient force to operate a 500-horse power engine.

"Stripping the process of all technical terms, it is simply this: I take water and air, two mediums of different specific gravity and produce from them by generation an effect under vibrations that liberates from the air and water an interatomic ether. The energy of this ether is boundless and can hardly be comprehended. The specific gravity of the ether is about four times lighter than that of hydrogen gas, the lightest gas so far discovered. I can best answer you intelligently by explaining the operations of the gun I used at Sandy Hook Proving Ground. It was a breech loading rifle weighing 500 pounds. It was specially constructed for me. On Wednesday last I charged my tube, a five-gallon reservoir of wrought iron, one and a half inches thick - with etheric vapor. Then I boxed it up and did not ever test it, so I was certain of its powers. There, hours before the experiments, it remained untouched in my shop. The process of charging it consumed less than four seconds of time. You could not guess how much material was used in making the vapor," and the inventor smiled and paused to allow the reporter to use his ingenuity at guessing.

"A pint of water," suggested the visitor.

Mr. Keely smiled more broadly than before. Then he said, with a tremble in his eye: "A pint of water would have been an extravagant quantity. To project 20 leaden bullets, each weighing nearly five ounces, at a velocity of over 450 feet a second, there was required six drops of water and about a pint of air. From this combination I derived sufficient force to fire 20 bullets of like weight as those used. The most curious thing about all is, that I found, at the end of my experiments, that I had increased the power in my tube instead of diminishing it. Just as a race horse needs to be warmed up before he can do himself justice, the initial velocity of the last bullet was more than that of the first one. I can take that same tube and operate it another day."

"Have you ever estimated the power of your interatomic ether?" was asked.

"I have produced frequently," was the answer, "a pressure of 10,000 pounds to the square inch in a quarter of a second. The process in reality is instantaneous. I have succeeded in making a vacuum of 31 pounds pressure. The greatest vacuum ever before produced was of 15 pounds pressure. One is an etheric, the other an atmospheric vacuum. In order to apply the ether to any gun, all that is necessary is to get the chord of vibration of the gun to agree with the chord of the vibrator. The vibrations run through 40 octaves. I am able to produce in metal the etheric vibrations in from 7 to 20 minutes. The flow thus induced is equal to that which it has required seven years to effect in the steel core you were examining a little while ago. Now, as I started to explain to you. I allow this interatomic ether to pass into the gun. I then vibrate the gun by means of a blow with a mallet, or anything of that kind. The steel coil attached to the gun increases the intensity of the vibration fifteen-fold. After the ether is introduced into the weapon behind the projectile the vibrations liberate it and it expands, and the bullet is propelled out with great force, four times as great, as I told you, as that of gunpowder, and that, too, on a low line of graduation. I have succeeded in generating a pressure of 56,000 pounds to the inch, and I have torn a Shaw gauge to pieces under the immense pressure. I have thrown a seven-ounce projectile through a cast iron plate three-eighths of an inch in thickness. I have propelled a lead bullet through a four-inch plank of wood. In this instance, after passing through wood, so great was the force of its progress, it flattened itself out the size of a plate and as thin as a wafer against a steel obstacle placed in the line of its flight. On another occasion a lead bullet, after being fired through a board, became disintegrated, and was showered over the room in particles no larger than the head of a pin. By attaching a steel coil to a resonator, a square box that performs the function of a violin, and drawing a resined bow across the coil, I can produce vibrations of such a character as to break glass as if it had been struck by a hammer."

"Has it ever occurred to you that there might possibly be some affinity between the interatomic ether vibrations and the manifestation that is called electricity?" was the next inquiry.

"I am positive they are entirely different substances," replied the inventor. "They have no points of resemblance. The ether passes through glass but does not affect it. Electricity will not pass the angle of glass. I expect to be able to apply the ether vibrators to telegraphy. I have experimented on 8,000 feet of wire, and in one-eight of a second I have transmitted to the other end of the wire a force sufficient to make holes in pasteboard. I confidently assert that I can intensify the vibrations so as to disturb the molecules in a wire 25,000 feet in length, and that in a second of time. The vibrations travel with extreme velocity. The operation of the wire in telegraphy is simply this: It is passed into a resonator, one end of with is attached to a vibrator. In this way the vibration are induced and promulgated. (BREAK in TEXT?) My large motor is completed and only needs to be adjusted. I will give a public test inside of two months. I have filed caveats of all my motors and inventions and will have them patented. I am now building one 500 horse-power engine and one 250-horse-power engine. The latter is completed except as to the vitalizing process. You can say for me that in a few weeks the public will have an opportunity of seeing the practical and successful results of my seven years experimenting. Although my initial discovery was purely accidental. I have pursued my investigations systematically and I am as confident of the result as I am that the sun will set. Recently I have made a number of experiments with my gun, and also with my motor, in the presence of the stockholders of the motor company and of prominent scientific men, and they have expressed themselves as abundantly satisfied with the manifestations and the applications a long time, the only trouble has been to bridle the force. Its existence is beyond dispute. This I have succeeded in accomplishing, and the problem that remains is of insignificant importance." (The New York Times) 9/22/1884