The Keely Motor is written up here and here. These links have many photos and history. Pictured here is the Keely Motor designed to function with etheric vapor acting against pistons. It has been stated he made 129 models of this motor as he perfected the design. In later literature the term "Keely Motor" was still used generically in reference to his new motor designs sometimes called globe motor, sphere motor, dynasphere and his last motor operated on sympathetic association. These new machines still used etheric vapor as a working medium but not as pressure against pistons. See the recent history of this motor here: Victor Hansen

Up to 1888 Keely still pursued the wrong line of research, trying to construct an engine which could hold the ether in a "rotating circle of etheric force," still ignorant of the impossibility of ever reaching commercial successes on that line. At the end of that year he abandoned his "perfect engine" and confined himself to researches. Before this, his researching devices had been principally of his own construction, but now he was supplied with the best optical instruments from models or designs which he furnished. If he made progress from 1882 to 1888 from 1888 to now (1893) he has made much more progress. From the hour in which he grasped "the key to the problem," the "principle underlying all" the solution broke upon his vision and he was no longer left at the mercy of the genii whom he had aroused." [Snell Manuscript - The Book, page 2]

Keely says: "In considering the operation of my engine, the visitor .... must abandon all thought of engines (such as conceived with pistons, eccentrics, or working with pressure.) "My system - both in the developing of this power and in every branch of its utilization is based and founded on sympathetic vibration. In no other way would it be possible to awaken or develop this force and equally impossible would it be to operate my engine upon any other principle. [KEELYS SECRETS - 1888] 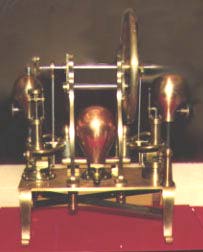 
"There was no "motor" visible, and Keely said that he had long since quit working at that thoroughly ridiculed engine." [Pittsburg Dispatch April 07-1890]