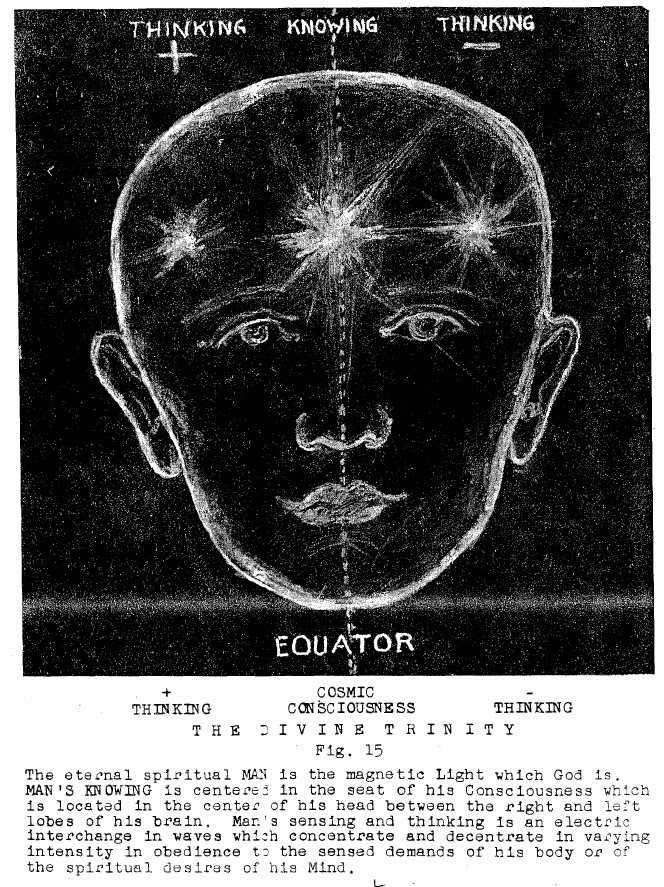 
Russell
"Mother and father reverse their spectrum positions, however. The womb of the mother is on the inside and the father surrounds it by a ring, such as one sees in the Lyra Nebula. One can also see the birth of a new star in the very center of that great black cathode hole which the mother womb is. That is the way that God turns the anodes of His thinking inside out to rest, and outside in to again become anodes. God's process of creating bodies through sex interchange is based upon the sex urge of the divided color spectrum of light to void its color divisions and become the White Light of rest from which its tensions were extended." [Atomic Suicide, page 117]

"Thinking is a process, an orderly, evolutionary, periodic process of absolute limitations." Russell, The Universal One, Book 1, Chapter 2 - The Life Principle

"The force called "thinking" which impels Mind into concentration and decentration in sequence is the only energy of the universe." Russell, The Universal One, Book 1, Chapter 4

"Suffice it here to say that thinking is the electro-generative action and magneto-radiative reaction of Mind.

"Thinking is a simple process of very complex effects, the sequence of which will be written in its proper place.

"The electro-magnetic opposition of Mind as expressed in the process of thinking is the source of all of the energy of the universe.

"Thinking, then, is a process of generation of motion-in-variable-opposition out of a state of maximum motion-in-non-variable-inertia, and of radiation back again into that state." Russell, The Universal One, Book 1, Chapter 5

"Aeons pass before aught but sensation - then instinct - makes bodies aware of the centering Light of that Divine Presence. Long ages pass before thinking and knowing transcend sensation and instinct. When thinking begins, knowing also begins. More long ages pass before God's ultimate Creation - MAN - knows of his divinity through full comprehension of the whisperings of the Inner Silent Voice which forever says to him: "What I am you also are." [Atomic Suicide, page 107]

"God is Light. God is Love.
God's creating universe is founded on Love. It is creating with Light.
''The principle of love is desire to give. God gives love by extending His Light. God's love is a mirror of Light which reflects His giving of love by the regiving of love.
The law of love is rhythmic balanced interchange between all givings and regivings.
The symbol of love is the wave of dual light which gives and regives equally and rhythmically. This is a dual electric wave universe of interchanging light.'' (Fig. 1)
God's Love is everywhere; His Light is everywhere. There is naught but good in God's omniscient universe. Evil is a product of man's thinking.
God extends His love, His power and His knowing, radially, from zero points of omnipresent stillness to other zero points in the measure of His desire to give form to His imag-

inings. The intensity of desire extended from centering points of rest to extended points of rest determines the dimension of desire. (Fig. 2)" [Russell, The Secret of Light, PART III: Omnipresence The Universe of Being Postulates and Diagrams]

Scientific observers have been deceived by their senses into thinking that opposites attract each other because of seeing the north pole of one magnet "pull" toward the south pole of another magnet. [A New Concept of the Universe, page 18]

Schauberger
The fact of the matter, however, is that through these totally perverse procedures and all manner of unnatural activities, everything we are experiencing today that is difficult, disgraceful and degrading of human dignity had inevitably to happen. Deductively thinking logicians have therefore over-looked the causes of the supposed effects, out of which, depending on whether the form of motion is natural or unnatural, the respective ancillary forces that either affirm life or negate it come into being. In this regard the life-denying forces increase, reproduce and advance themselves in exactly the same way as their counterparts, which promote the naturally ordained course of further development through increase and qualitative improvement. This would be impossible, however, were it not for the temperature-forms responsible for expelling what is inferior and for purging, purifying and detoxifying organisms. It is out of these temperature-forms that the decomposing, analysing cavitation current arises, which today's science uses in the widest variety of ways and without exception for a supposed build-up of culture. Clearly the misfortunes we shall have to reap will be all the greater, the more widespread and intensive the activity of a science that makes use of these lower-grade temperature-forms. [The Energy Evolution - Harnessing Free Energy from Nature, The Life-Current in Air and Water]

Naturally, no normal thinking person will believe that he or she were so brain-washed at school and in church as to be made to believe in the existence of rigid laws and dogmas in a Nature so rich in interchanges of substances and metabolic processes. For this reason it is still necessary to take a small example as an aid, which every respectable Tyrolean knows, who loves a good wine, even if a little dry. [The Energy Evolution - Harnessing Free Energy from Nature, New Forms of Motion and Energy]

destructive force. That is to say, there is no machine, no transport system, temperature or light generating plant, which does not make use of developmentally dangerous axial->radial impulses. The same applies to all the operational procedures of forestry, agriculture, water and energy supply. All the watercourses and drinking-water plants are being systematically destroyed not only by this development-disrupting motion, which activates electrolytic dissociative processes, but also by official rules and regulations. And if this were not enough, this nation-destroying motion and way of thinking is being enforced by law! [The Energy Evolution - Harnessing Free Energy from Nature, Magnetism is the Function of Levitism and Electricism is the Function of Gravitism]

Jesus
Part of your growth is to understand that if the technology that man develops offends or contradicts the Laws of Nature or the Universe, the Universe herself will make it right. So, along with technology, a chain reaction of events is established. If the thinking of the head alone is used to develop methods to meet challenges, the Universe is not being duly consulted, thus the implications rest upon the individual. There is Nature to answer to. If one uses the more harmonious thinking of the Heart in conjunction with the mental faculties, one becomes sensitized to far-reaching effects more keenly, thus avoiding typically unseen pitfalls. Until you feel that you can offer assurance that your technologic advances will not be misused and create more pain, you need to consult your Heart as a guide. By using your head, you engage in a realm of exercise that is an invitation to be altered by another’s thinking and perception of “need”. Are you willing to take on this responsibility? You must be more clever than I, if you answered in the affirmative. [Jesus, Good Heart]

In closing, I hope I have communicated to you how the well-being of Earth and Humans rest in your able hands. The hands need to be directed by the Heart and Head. If you choose the logical dictates of the head to direct your research and living, you reduce your existence to mental and material amassing. By including the Heart in your work and life you expand your possibilities for abundance and joy to nurture many more in a safer and more harmonious manner. Besides, consultation with your Heart and Spirit signals an invitation to your spiritual family to assist you in your quest. Now, isn’t that more appealing than thinking your way out of a challenge all alone? [Jesus, Good Heart]

Rudolf Steiner
"...Those who find it necessary for the explanation of thinking as such to invoke something else, such as physical brain processes or unconscious spiritual processes lying behind the conscious thinking which they observe, fail to recognize what an unprejudiced observation of thinking yields. When we observe our thinking, we live during this observation directly within a self-supporting, spiritual web of being. Indeed, we can even say that if we would grasp the essential nature of spirit in the form in which it presents itself most immediately to man, we need only look at the self-sustaining activity of thinking...

"...For this organization contributes nothing to the essential nature of thinking, but recedes whenever the activity of thinking makes its appearance; it suspends its own activity, it yields ground; and on the ground thus left empty, the thinking appears. The essence which is active in thinking has a twofold function: first, it represses the activity of the human organization; secondly, it steps into its place..

"I was lifted into another dimension of conscious perception, which enabled me to see the TRUTH concerning life and existence. I saw, lucidly and clearly, what was real and what was false in man's thinking." [Christ Returns - Speaks His Truth, Letter 1, page 11]

'If you could carry within your mind, a seed - the perfected plan of your most heartfelt goals, and know beyond all doubt, that it can grow and come into perfect fruition, you would see this wonderful seed take on a life of its own which would presently manifest in your life.
'And you could surely move the mountains in your lives - those mountains which stand across your path and prevent you from achieving all that you would like ... mountains which, in times of recklessness and evil thinking have been created by yourselves.
'If you only understood creation and existence, you would be able to live lives of total freedom, limitless achievement and transcendent joy. [Christ Returns - Speaks His Truth, Letter 3, page 65]

Pond
"An active (polar) principle within Mind originating in the intellect, ego and sense. Thinking is of the lower levels of mental activities having to do with perceived effects and not cause. Sometimes referred to as "Split Mind" thinking as opposed to "Whole Mind" knowing as of the heart. Thinking is of the natural man (sense) and not science or Wisdom. [Dale Pond see Knowing]

"Critical Thinking is the ability or function to discern aliquot parts or cause from seeming effect." Dale Pond

Cayce
"Thinking adds not one whit to your stature materially, but mentally, spiritually, it may produce the revolution which brings peace and harmony into the world." [Cayce 3384-3]