Keely
"I include in the polar forces, magnetism, electricity and gravital sympathy, each stream composed of three currents, which collectively make up the governing conditions of the one Universal controlling medium." [POLAR CURRENT]

"All molecular masses of terrestrial matter are composed of the ultimate ether from which all things originally emanated. They are sympathetically drawn towards the earth's center, as according to the density of their molecular aggregation. In other words, the celestial flow as controlling terrestrial physical organisms.

''"The sympathetic outflow from the celestial streams reaches the infinite depths of all the diversified forms of matter. Thus it is seen that the celestial flow which permeates, to its atomic depths, the terrestrial convolutions of all matter, forms the exact sympathetic parallel to the human brain-flow and the physical organism, a perfect connective link of controlling sympathy or sympathetic control. Under certain orders of sympathetic vibration, polar and antipolar, the attractive sympathies of either stream can be intensified, so as to give the predominance to the celestial or to the terrestrial.’' [THEORY OF VIBRATORY LIFT FOR AIRSHIPS]

"These (three modes of vibration), it will be noted, correspond to the three laws of being. It is not to be understood that any one of these three modes of vibration can exist independently. Each by itself is called a "current," and all three must be present in every "stream" or "flow" of force. The relations of the currents in every flow are expressible in thirds, and it is experimentally demonstrable that the relations of the three are in the order named: as 33 1/3 : 66 2/3 : 100." [Keely and His Discoveries, Conclusion, Keely's Physical Philosophy]

"Science will in time classify the important modifications of the one force in nature as sympathetic streams, each stream composed of triple flows. Keely maintains that the static condition which the magnetic needle assumes when undisturbed by any extraneous force outside of its own sympathetic one, proves conclusively that the power of the dominant third, of the triple combination of the magnetic terrestrial envelope, is the controlling one of this sympathetic triplet, and the one towards which all the others coordinate. All the dominant conditions of nature represent the focal centers towards which like surrounding ones become sympathetically subservient. The rapid rotation of the magnetic needle of a compass shown in his experiments rests entirely on the alternating of the dominant alone, effected by a triple condition of vibration that is antagonistic to its harmonious flow as associated with its other attendants. A rapid change of polarity is induced and rapid rotation necessarily follows. [Snell Manuscript - The Book, DISTURBANCE OF MAGNETIC NEEDLE, page 8]

"In reply to the question, "What do you include in the polar forces?" Keely answers, "Magnetism, electricity, and gravital sympathy; each stream composed of three currents, or triune streams, which make up the governing conditions of the controlling medium of the universe: the infinite ninths that I am now endeavouring to graduate to a sympathetic mechanical combination, will, if I succeed, close my researches in sympathetic physics, and complete my system. These sympathetic streams from celestial spaces, percussing on the dense atmospheric environment of our earth, by their infinite velocities, wrest from their atomic confinement the latent energies which we call heat and light." [Keely, Appendix II]

Schauberger
This 'why' has been clarified by various of Nature's phenomena. Amongst others, the stationary trout that stands motionless in torrential alpine streams and flees upstream like lightning whenever danger threatens. Or spawning [The Energy Evolution - Harnessing Free Energy from Nature, The Life-Current in Air and Water]

Water Supply
The application of this form of motion would bring about the revivification of sluggish, stale, tired, fish deficient, bacterially polluted brooks, streams and rivers through the artificial reinstatement of cycloid-space-curve-motion in draining water.[3] In other words, the reconfiguration of truncated and straightened channels in which the more exalted formative and transformative processes can no longer occur, due to the absence of cycloid motion. Therefore the stocks of basic allotropic heat-imparting substances are no longer consumed (bound) and the improperly regulated watercourses inevitably become warm, stale, devoid of fish and infected with bacteria, because the revivifying form of motion is missing or has been disrupted or eliminated by smooth-walled bank rectification. [The Energy Evolution - Harnessing Free Energy from Nature, The Practical Application of Cycloid-Space-Curve-Motion arising from Processes of Cold Oxidation]

Conversely, similar formative and levitative energies are created in front of the intake through primary processes of synthesis. These, for example, enable the trout to stand motionless in torrential streams, or to flee like lightning upstream when danger threatens. This is a phenomenon that cannot be explained mechanically, because the free-standing trout must not only over-come its own body-weight, but also the weight of the oncoming water. It overcomes this all the more easily, the more rapidly and torrentially the water containing these valuable threshold suspensions flows, which are reactivated [The Energy Evolution - Harnessing Free Energy from Nature, The Economy Founded on Reactively Produced Energy]

the absolutely indispensable resistance for all motion. As the formative velocity rises, the resistance increases commensurately in order to provide the additional frictional (resisting) surfaces required by the accelerating matter. The actual loss of formative energy associated with this amounts to about 4%, i.e. in this case approximately 96% of the formative energy (= magnetism streaming upwards at enormous speed = levitism) is freed, which sucks up its generating device and a portion of its immediate environs in its wake. In other words, the 'all attracting' comes into being and becomes active with elemental ur-force. [The Energy Evolution - Harnessing Free Energy from Nature, Magnetism is the Function of Levitism and Electricism is the Function of Gravitism]

Ramsay
The effects of different positions of chords. The first position is clear and solid; the second is light and pretty. The notes which have the most varied effect in a stream of harmony are the upper and under notes, the edges of the stream; the two outlines determine the effect:- 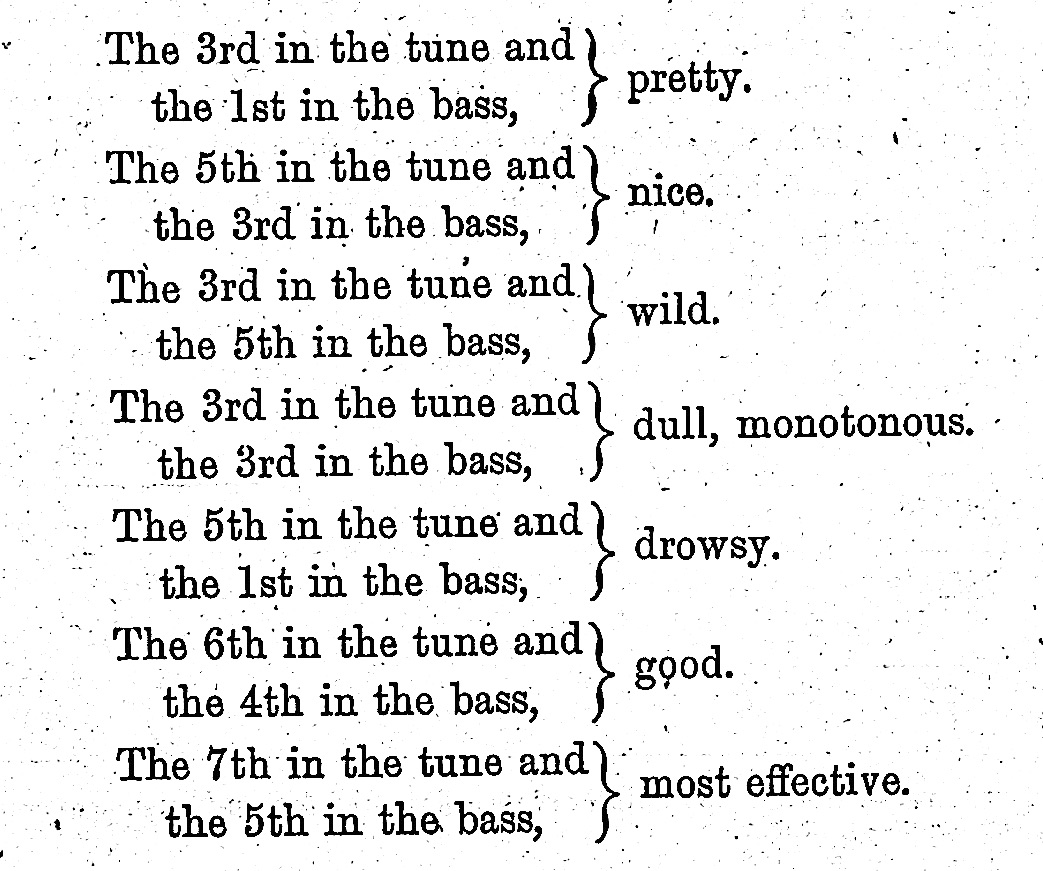