The Transport of Ore in Double-Spiral-Flow Pipes

At first this proposal was ridiculed, because according to expert opinion either the ore, having a specific weight of 1.9 and therefore heavier than water (= 1.0), would be left lying on the bottom or the pipe-walls would be heavily scoured within a short space of time, and therefore the proposal would not be commercially viable.

In order to counter these opposing views practically, test pipes 64 metres long with an internal diameter of 27.5 cm (11 inches) were fabricated. At a gradient of 1%, ore and pebbles with a grain-size of about 10 cm (4 inches) in cross-section were transported down the pipe. The experiments were carried out at Kohlleben. The steeper the geological gradient was, the more efficacious the transport.

The experts from Alpine-Montan and the then Ministry of Agriculture were forced to admit that ore, stones, mineral coal - in short, bodies heavier than water, were in fact transported down the flow-axis of the pipe without touching the walls.

The speed of the ore, which moved silently along the pipe-axis, was so great that the passage of lumps of ore larger than fist-size could not even be observed in the crystal-clear water through the observation windows. Even at the point of discharge, the speed was too great to be able to discern the stones, etc.

In order to ascertain the uninhibited motion of the transported material, small wire baskets were placed at the end of the pipe in order to determine the flow velocity and the actual position and motion of the heavy bodies down the axis of the pipe.

[5] See also figs. 8 & 9 and associated patent descriptions in The Water Wizard, Vol I of the Ecotechnology series. — Ed. 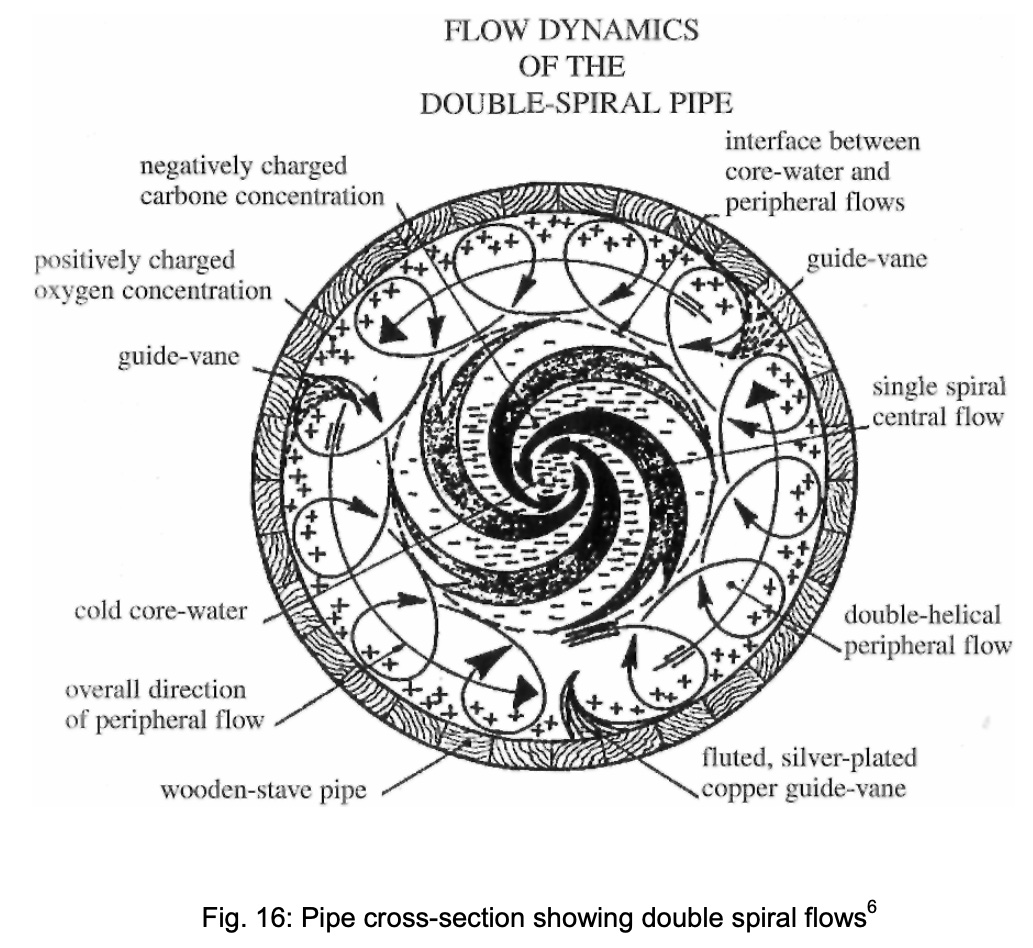 
After this practical demonstration, it was announced that the quantity of ore available for transport was falling by the month and that it would no longer be profitable to build a second such pipe-line alongside the existing railway, because it might be necessary to shut down the blast-furnaces altogether and to close the business temporarily.

The whole affair was no longer pursued owing to the deteriorating economic situation.

[6] In regard to the carrying capacity of wooden pipes, the following passage from a book 'The Australian Wood Pipe Company' (p. 21, publ. circa 1910) provides interesting insights. "It is conceded that smoothly-planed timber has the lowest coefficient of friction of all materials ordinarily employed for conveying water. Many extensive experiments have been made on the flow of water in various kinds of pipe operating under many conditions. Within the last few years, the United States Department of Agriculture has carried on a very extensive series of experiments on the flow of water in Wood-Stave Pipe, and attention is called to their Bulletin No. 376, and in particular to the conclusions therein: Conclusions. 'That the data now existing does not show that the Capacity of Wood-Stave pipe either increases or decreases with age. That wood pipe will convey about 15 per cent more water than a ten-year-old cast iron pipe or a new riveted pipe, and about 25 per cent more than a cast iron pipe 20 years old, or a riveted pipe ten years old.' The conclusion of Government experiments, as given above, definitely prove that the carrying capacity of Wood-Stave Pipe is from 15 percent to 25 per cent greater than metal pipe, with the additional advantage that Wood-Stave Pipe will remain smooth and clean internally throughout its entire life."- Ed.

Since interest in this ore-transport has now been revived by a third party, the following description of the method of transporting bodies heavier than water, which contradicts known scientific opinion, is still relevant.

It is known that a few rivers not only transport their heavy sediment to the sea, but despite the resistance of the heavy sea-water, actually carry it far out and form promontories (haff formation).

Rivers that warm up along their course, deposit their sediment, silt up the channel and form deltas, so that instead of the formation of new dry land, marsh and swampland have created.

The secret of the dwindling and disappearance of the tractive force and carrying capacity in a naturally flowing stream lies in the way it moves.

The origins of all motion are differences in potential. If these differences cannot be maintained during flow, the water's kinetic energy wanes and the sediment is deposited in the wrong place. New bends are formed in this way, which have a greater significance than has hitherto been assumed.

The river-bend or curve is the cradle of water. Due to the water's swaying and swirling motion, processes of atomic transformation take place within the inner structure of the water, which have escaped the notice of the world of experts. [The Energy Evolution - Harnessing Free Energy from Nature, The Transport of Ore in Double-Spiral-Flow Pipes]

The amount of energy lost when a river discharging about 500 m3/sec is warmed to about +22°C (+72°F) amounts to about 45 million kilowatts or 57 million horsepower per second.

This energy loss should be viewed as a form of latent energy, which is lost with a dynamic form of motion, but can be gained by a bio-dynamic form[8], for which experimental proof is available.

The energy that can be gained through bio-dynamic motion manifests itself in an increase in tractive force and carrying capacity, which appear primarily in the pipe-axis. Here the water is densified inhomogenously, because its contained gases are transformed into non-spacial dynagens.[9] As a result the core-water surges ahead like a ball of energy with increasing velocity.

Dynamically conducted water, on the other hand, generates motion-impeding gases.

[7] This is due to the abnormal evaporation rate caused by extended surface exposure and excessive infiltration into the ground due to the downward displacement of the +4°C (+39.2°F) anomaly zone. — Ed.
[8] Dynamic — Bio-dynamic: Here Viktor Schauberger differentiates between conventional hydraulics and naturalesque water flows. — Ed.
[9] Inhomogenously: Since some of the water's gases are transformed into a non-spacial state through densation and the remaining water is densified through cooling, two different states of densation exist and therefore the water is densified inhomogenously. Similarly, despite the overall cooling of the water, the peripheral flow are always warmer than the central core. - Ed.

In patented double-spiral-flow pipes the peripheral water-masses are caused to swirl within and about themselves and around the central pipe-axis. This produces differences in potential between the peripheral and core waters, which lead to an accelerated flow resulting from the energising and ennobling of the bio-dynamically moved water.

The bio-dynamic movement of water is thus the form of motion that leads to culture per se or the inner culture of the water.

If the concept of 'culture' were to be defined naturalesquely then it should be interpreted as "the protection of Nature's pre-acting fundamental processes". This is only possible by taking care of what it is that is moved, for as mentioned earlier, naturalesque motion leads to the vivification of the life-carrier - water - and unnatural motion to its mortification, or its death and disappearance.

The open secret of water consists in the fact that processes of organic synthesis take place in the naturalesque conduction of water, whereas processes of organic analysis occur when it is conducted unnaturally. In the former case, the growth of water and an increase in latent energy occurs, hence a qualitative improvement. In the latter case, it results in the disappearance of water, to losses in latent energy and logically to a decline in quality.

It would deviate too far from the theme at hand to elaborate the inner processes of motion of naturally or unnaturally conducted water in greater detail. It is worth mentioning briefly, however, that the water discharged from such an ore transportation system is the most ideal regulator of the downstream flow regime of a river below it, because the enormous energies generated through double spiral conduction restore the river's kinetic energies, which to a certain extent were lost through its unnatural regulation. Compared with current methods of transporting the present 3 million tonnes of ore by rail, not only can 9 million Marks be saved, but the large rivers can be reinvigorated at the same time, thus becoming dynamic, fresh and healthy through an unimaginable boost of energy from the double-spiral-flow pipe installation. Fresh and healthy water is the first priority for the culture of any country.

Return to The Energy Evolution - Harnessing Free Energy from Nature