Darkness usually refers to ignorance or not knowing; unaware, unconscious or lack of light of understanding, awareness or knowledge. 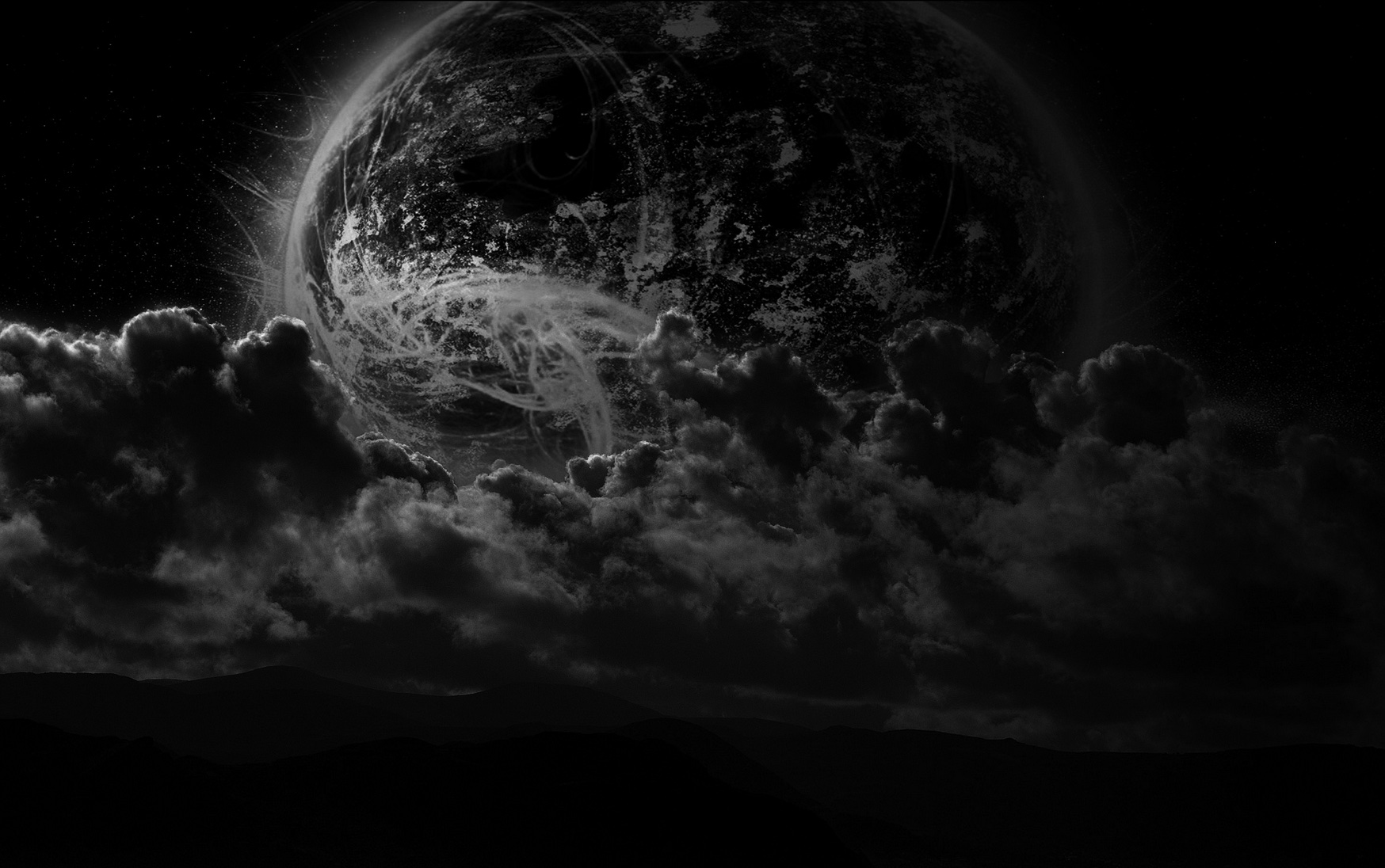 
"The secret of Light is its birth out of darkness." Over 3000 years ago, Taoist Lao Tzu penned the Tao Te Ching:

Blavatsky
“DARKNESS is the one true actuality, the basis and the root of light, without which the latter could never manifest itself, nor even exist. Light is matter, and DARKNESS pure Spirit.” [H. P. Blavatsky, The Secret Doctrine 1:70]

Russell
""Clayed images of My imagining who know not Me in them are but dwellers of earth's dark. To sensed man the doors of My Kingdom are self-barred by darkness until the Light of Me in him is known by him as Me." [Russell, Atomic Suicide, page 239]

Solidity is thus born out of vacuity. A positive pole is created on one side of a dividing equator and its equal negative opposite is created on the other side. [Russell, Home Study Course, Lesson 41]

You will recall that this is God’s method of dividing the darkness from the light to manifest the concentration and decentration pulsations of His electric thinking. [Russell, Home Study Course, Lesson 37]

Darkness, therefore, was given man as another way of dividing the undivided. You will know what we mean by day and night sequences by turning off the lights in your room. You can no longer SEE light because it is beyond your range of vision, but you KNOW that it is still there. It is the ONE THING which can never be extinguished. In the same sense, you cannot SEE God but you can KNOW that God is behind all the orderliness which Creation is. [Russell, Home Study Course, Lesson 42, page 792]

Hughes
On colours developing by the same laws as musical harmonies
—The physical properties of light and darkness briefly considered
—If the laws are correctly gained, harmonics of tones and of colours will agree
—Quotation from a lecture by Professor W. F. Barrett on the order of sonorous and luminous wave-lengths
—Fountain of musical harmonics, E root of B; in colours yellow and ultra-violet, being tints and shades of white and black
—All harmonics of sound and colour condense into a primo springing from the fountain
—Multequivalency of tones and colours
—Wünsch's views nearly one hundred years ago
—Clerk Maxwell's, Lord Rayleigh's, and [Harmonies of Tones and Colours, Table of Contents1 - Harmonies]

Reflections on the scheme
—Our present powers are as darkness groping after light
—A quotation from Milton compared with the scheme
—Major and minor chords respond to our feeling
—Milton had a glimpse of the laws of Evolution
—Evade the belief of the development of trinities from unity and the scheme falls into ruin, . . . . . . 43 [Harmonies of Tones and Colours, Table of Contents4 - Harmonies]


WE know not for how many ages colours have been developing. "In the beginning, darkness was upon the face of the deep." The physical properties of light are probably the deepest and most interesting studies in physical science. I only touch upon light as the acting energy or life, causing, in its struggles with darkness, not only the varieties of colour around us, but the colour even of light itself, as colours arise from rays of light exercising different influences. [Harmonies of Tones and Colours, On Colours as Developed by the same Laws as Musical Harmonies1, page 18]

With our present powers the darkness of ignorance is ever groping after the light of knowledge. If the field is so vast when we merely attempt to harmonise the laws which regulate the visible creation, it widens indefinitely when we attempt to harmonise, by the same laws, Creation with the Scriptures. "God is light," and with His Holy Spirit for our teacher, every line of His word instructs us; "like the ocean, the word remains essentially the same, while the light never plays upon its surface without deepening and varying its hues." [Harmonies of Tones and Colours, Reflections on the Scheme1, page 43]

If we examine the line last quoted by the laws of life which regulate the foregoing scheme, we may compare it with the fundamental threefold chord of the scale of C and its relative colours,

from the fountain key-note which contains in itself all tones. "Him first," the Son of God proceeding from the Almighty, and yet in Himself the Trinity in Unity. E, yellow or light. E is the root of B, ultra indigo, or black. "Him midst," the Almighty Father, the Fountain of life, light gradually rising and dispelling darkness. G, blue, "Him last," the Holy Spirit, proceeding from the Father and the Son, Trinity in Unity. The Son of God and the Holy Spirit are the complemental working pair throughout the universe; each containing "the seven spirits of life." Red and blue contain all colours in each. C and G are a complemental pair, C rising from the fountain key-note which contains in itself all tones, and C and G combine all tones in each. In Chapter III. it is explained that all varieties of tones and colours may be condensed into this pair, rising from and falling again into the fountain. [Harmonies of Tones and Colours, Reflections on the Scheme2, page 44]

If, as I believe, the Natural Sciences throughout Creation develope by Trinities, how silently, yet how strikingly, may we trace the wonders of Redeeming Love. "Wisdom hath builded her house; she hath hewn out her seven pillars."— Prov. ix. I. We strikingly see in the development of harmonies the type of 2 Cor. iii. 18, as each key rises from darkness to light, or, descending, falls from light to darkness.
F. J. Hughes
BEDWYN LODGE,
SANDOWN, ISLE OF WIGHT,
February, 1885 [Harmonies of Tones and Colours, Supplementary Remarks, page 54]

Christ Returns - Speaks His Truth
"Each thong represents a person's habitual thoughts, responses to people and events, prejudices, hates, animosities, anxieties, sorrows, all of which bind him down and shut out the Light from his inner vision drawn from the 'Creative Power'. Thus he enters into darkness but does not know it. He believes he is growing up and becoming mature in the ways of the world which will enable him to forge ahead and make 'good' - become successful - the aim of most people on earth.
In fact, the more mature he becomes and versed in worldly ways, the more densely do his chains and thongs imprison him within the grip of the twin IMPULSES of 'Bonding-Rejection'.
Furthermore, each chain is forged out of selfish and deceitful desires, greed, aggression, violence and rape. These chains hang heavy around him and burden the psyche, which is the 'creative consciousness power' deep within him. Chain and thong will bind him tighter with every passing year until he realizes what he is doing to himself and sincerely repents each thong and chain and makes due restitution to others whom he has harmed." [Christ Returns - Speaks His Truth, Letter 1, page 17]

"As many of you are aware, you are entering a new phase of world history, during the course of which it will be realised that no longer is the great divide between the wealthy and the poor.
The great divide will be in consciousness. The divide will be between those who have been able to find entrance into the higher spiritual consciousness and radiate love and acceptance equally to all - friends and foes - and who make it their goal to radiate Divine Consciousness into every facet of their daily lives - and those who remain encased within their ego-drives, seeking domination of the weak. They may appear to succeed for a while - but eventually they will fail and their suffering in their self-created darkness will be great.
These Letters will be the means of your moving out of darkness into LIGHT." [Christ Returns - Speaks His Truth, Letter 4, page 22]

"Darkness and Light are both of one Nature, different only in seeming, for each arose from the source of All.” [Hermes Trismegistus]