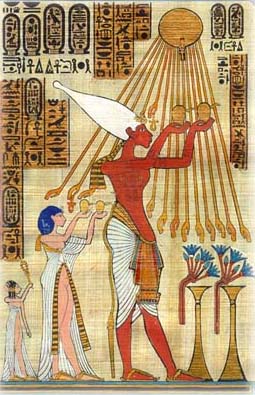 
Keely
"Macvicar foreshadowed the teachings of this new philosophy when he wrote, "All motion in the universe is rhythmical. This is seen in the forward and backward movement of the pendulum, the ebb and the flow of the tides, the succession of day and night, the systolic and diasystolic action of the heart, and in the inspiration and expiration of the lungs. Our breathing is a double motion of the universal ether, an active and a reactive movement. This androgyne principle, with its dual motion, is the breath of God in man. The writings of the ancients teem with these ideas, which have been handed down to us from generation to generation, and are now flashing their light, like torches in the darkness, upon mysteries too long regarded as "lying outside the domain of physical science." [Bloomfield-Moore, see Father-Mother Principle, Neutral Center]

"The 'aetheric field' is only another name for God - sympathetic flows are the breath of God, permeating the vast volume of space. We must become conversant with this philosophy before we can realize the infinite degrees of pleasure in the future state, as made known to us in the solution of this subtle and greatest of all problems, sympathetic flows. The higher order we attain in our earthly connections the higher will be the tenuous conditions after liberation from the physical. The degrees of future happiness, high or low orders, depends upon our line of graduation in the physical or earthly state. It is not possible that a crude organism, susceptible of only low orders of graduation, can soar, after its liberation from its earthly tenement, to a condition of as high an etheric assimilation as one of a much finer order. Our lives are graduated here by the good or evil we assimilate...

"I lose myself in my conjectures when contemplating this wonderful power, and feel then to be a partial sacrilege; for who can fathom the ways of the Most High? No finite mind can reach up to Infinity; but it is given us to appreciate much that we cannot understand. Of "independent centers," Keely writes: "The atomic spheroids cluster in triplets, and rotate in that order of subdivision which I call inter-aetheric or fourth order; the interstitial flow of which I recognize as independent centers, having that inconceivable rotatory attraction that gives to each the power of self-assimulation." [Keely, Keelys Secret - He Explains His Mystic Force]

"The ancients were far better schooled in spiritual philosophy than are we of the present age. Their mythological records, in their symbolical meaning, prove this fact. They recognized this latent element as the very breath of the Almighty; the sympathetic outflow of the trinity of force, the triple spiritual essence of God Himself. Their conceptions of Deity were greater and truer than our own. From them we learn that when God said 'Let there be light,' He liberated the latent celestial element that illuminates the world: that when He breathed into man the breath of life, He impregnated him with that latent soul element that made him a living and moving being." [Veil Withdrawn]

Schauberger
This may truly appear to be the monstrous invention of an unsound mind to those who have no inkling what colossal energies are contained in a tiny drop of water, which are either bound or freed according to the type of motion. It may also seem just as utopian when it is stated that with the aid of these elemental ur-forces secreted in the medium of water and in the air (or the condensed Breath of God), the entire production of power, heat, cold and light can be reduced in cost by slightly more than 90% and that with this formative synthesising current all growth can be increased by about 30% per annum and qualitatively improved. [The Energy Evolution - Harnessing Free Energy from Nature, The Life-Current in Air and Water]