"The ancients were far better schooled in spiritual philosophy than are we of the present age. Their mythological records, in their symbolical meaning, prove this fact. They recognized this latent element as the very breath of the Almighty; the sympathetic outflow of the trinity of force, the triple spiritual essence of God Himself. Their conceptions of Deity were greater and truer than our own. From them we learn that when God said 'Let there be light,' He liberated the latent celestial element that illuminates the world: that when He breathed into man the breath of life, He impregnated him with that latent soul-element that made him a living and moving being." [Bloomfield-Moore, Veil Withdrawn]

The breath of Life is assumed to be the same as Keely's Celestial Radiation or Latent Element and Russell's Light or Father Forces. In ancient Egyptian art the breath of life is denoted by the arms extending down from the Sun with the hand on the end (usually holding an Ankh, their symbol for Life or Life Force) extending the breath of life to individuals.

"For a man is a little lower than the angels, yet was made that he might become the companion of the Creative Forces; and thus was given - in the breath of life - the individual soul, the stamp of approval as it were of the Creator; with the ability to know itself to be itself, and to make itself, as one with the Creative Forces - irrespective of other influences." [Cayce (1456-1)] 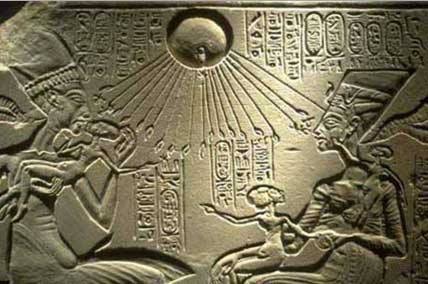 
"The greater influences from any (planet) is from whatever one from which the soul-and-spirit return, to bring the individual force to the earth. As the spirit is breathed into the body, whence did it come? That is the influence; not the revolution-ideas given by those who study those planetary influences." [Cayce (3744)]

"This is your next step. We have pictured your simultaneously living-dying body. You must now know that all bodies in all the universe are the same in all respects, whether they are electrons, cells, rocks, metals, trees, men, planets or suns. All of them live and die in the same manner. All breathe in the charging breath of life and breathe out the discharging breath of death. All of them compress heat and polarize when they breathe in, and expand, cool and depolarize when they breathe out." [Atomic Suicide, page 9]