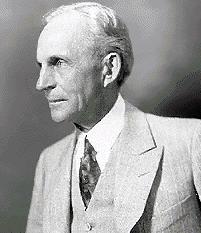 
Henry Ford (July 30, 1863 - April 7, 1947) was a prominent American industrialist, the founder of the Ford Motor Company, and sponsor of the development of the assembly line technique of mass production. His introduction of the Model T automobile revolutionized transportation and American industry. As owner of the Ford Motor Company, he became one of the richest and best-known people in the world. He is credited with "Fordism": mass production of inexpensive goods coupled with high wages for workers. Ford had a global vision, with consumerism as the key to peace. His intense commitment to systematically lowering costs resulted in many technical and business innovations, including a franchise system that put a dealership in every city in North America, and in major cities on six continents. Ford left most of his vast wealth to the Ford Foundation but arranged for his family to control the company permanently (until it was taken over by outsiders).

He was known worldwide especially in the 1920s for a system of Fordism that seemed to promise modernity, high wages and cheap but high quality consumer goods. (wikipedia)

American industrialist and business tycoon Henry Ford resigns from his position as chief engineer at Edison Illuminating Company in Detroit, Michigan on August 15, 1899 to start his own automobile factory.
By the time Ford resigned from Edison, he had already developed three automobiles in his home workshop and created a new carburetor that was patented.
The first automobile company that Ford founded was the Detroit Automobile Company. Unfortunately, the automobiles made were of lower quality and higher priced than what Ford wanted to produce, and the company dissolved in January 1901.
Just under one year later, Ford founded the Henry Ford Company in November 1901, which was reincorporated as the Ford Motor Company in 1903.
With the help of investors and the Dodge brothers, John and Horace E., Ford was able to produce a quality automobile at an affordable price for the everyday American.
That automobile was the Model T which debuted in October 1908.
Additionally, Ford developed the modern-day assembly line, which revolutionized factory production.

April 7, 1947, pioneer of the automobile, Henry Ford, died at his estate in Dearborn, Michigan. Born on a farm in 1863, Ford, the eldest child of his family, spent much of his teenage years working as an apprentice machinist in the city of Detroit. Ford later became an engineer, and during the 1890s, he began experimenting with the internal combustion engine, developing a gas powered, self-propelled vehicle in 1896 that he called the “Quadricycle.” From that point on, Ford was obsessed with coming up with a successful way to manufacture these vehicles cheaply, efficiently, and in large enough numbers that the general public could afford them.
In 1903, after two failed attempts, he founded the Ford Motor Company, which just a few years later came out with the Model T, a cheap, mass produced, easy to drive, easy to maintain vehicle. It was an instant hit. Within ten years, half of the cars on the road were Model Ts. In addition to the automobiles themselves, Ford also revolutionized the factories producing them. His factories featured a moving assembly line where each worker stayed in place and had an assigned part to add to the car. At its peak, the Ford Factory could build an entire car in only 93 minutes. Also, Ford became the first to introduce the minimum wage and the first to establish a set eight-hour workday. Most other auto makers paid half that much and had their employees work a nine-hour day. In the end, Henry Ford’s innovation of the fair wage made it possible for the workers to actually buy the cars they made, creating in part the American middle class as we know it today.

On October 7, 1913, Henry Ford’s entire Highland Park, Michigan automobile factory ran a continuously moving assembly line for the first time. A motor and rope pulled the chassis past workers and parts on the factory floor, cutting the man-hours required to complete one Ford Model T from 12 1/2 hours to six. Within a year, further assembly line improvements reduced the time required to 93 man-minutes.
The staggering increase in productivity resulting from use of the moving assembly line allowed Ford to drastically reduce the cost of the Model T, thereby accomplishing his dream of making the car affordable to ordinary consumers. Before then, the automobile industry generally marketed its vehicles to only the richest Americans, because of the high cost of producing the machines. Ford’s Model T was the first automobile designed to serve the needs of middle-class citizens: It was durable, economical, and easy to operate and maintain. Still, with a debut price of $850, the Model T was out of the reach of most Americans. Ford Motor Company understood that to lower unit cost it had to increase productivity. The method by which this was accomplished transformed industry forever.
Prototypes of the assembly line can be traced back to ancient times, but the immediate precursor of Ford’s industrial technique was 19th-century meat-packing plants in Chicago and Cincinnati, where cows and hogs were slaughtered, dressed, and packed using overhead trolleys that took the meat from worker to worker. Inspired by the meat packers, Ford innovated new assembly line techniques and in early 1913 installed its first moving assembly line at Highland Park for the manufacture of flywheel magnetos (pictured). Instead of each worker assembling his own magneto, the assembly was divided into 29 operations performed by 29 men spaced along a moving belt. Average assembly time dropped from 20 minutes to 13 minutes and soon was down to five minutes.
Ford rapidly improved its assembly lines, and by 1916 the price of the Model T had fallen to $360, and sales were more than triple their 1912 level. Eventually, the company produced one Model T every 24 seconds, and the price fell below $300. More than 15 million Model Ts were built before it was discontinued in 1927, accounting for nearly half of all automobiles sold in the world to that date. The affordable Model T changed the landscape of America, hastening the move from rural to city life, and the moving assembly line spurred a new industrial revolution in factories around the world.