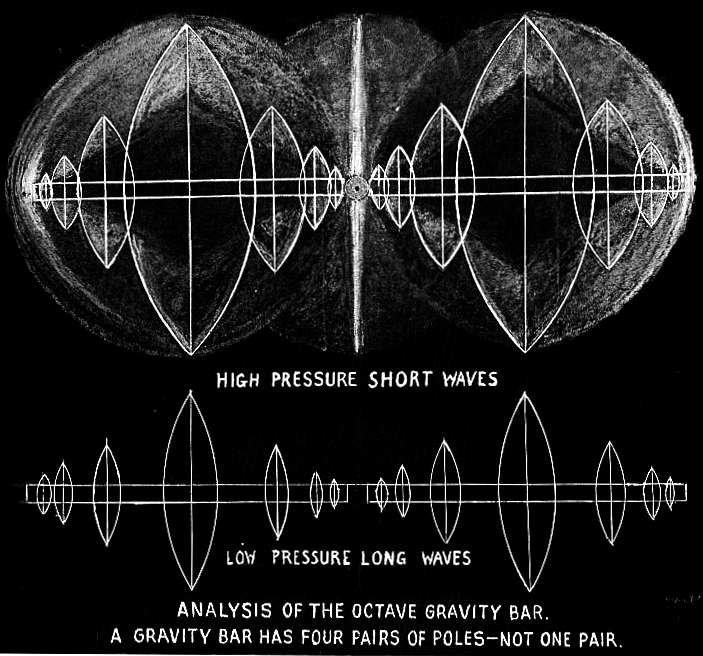 Gravity
(courtesy University of Science and Philosophy)
(click to enlarge)

"Gravitation is the contractive power within Electricity to divert the universal constant of energy into centripetal vortices of closing spirals of increasing speed, thereby attracting similar states of motion into an accumulation of mass, the pressure of which increases toward its center.

"Gravitation is an expression of the power of Electricity to accumulate by induction and, by so doing, to force magnetism to increase its resistance to that accumulation.

"Gravitation is the (electric) inductive force." Russell, The Universal One

"Gravity is evidenced wherever compression from without is maximum. Gravity is a focal point from which matter desires to explode outwardly. Gravity does not pull inwardly from within as the deceptive illusion of Nature would have you believe. Neither is it the attractive force which Newton's senses were deceived into believing, for a center of gravity is a point of maximum electric potential. Gravity never changes. It is never more or less. It is maximum everywhere. It is electric potential which changes by multiplying and dividing the measure of power it is able to express by drawing it from its gravity center of control. It is like the power of a man who can draw but little from the great omnipotence which centers him, as compared with another man whose knowledge enables him to draw more of it. Electric potential is the tension caused by the electric division of the ONE universal condition of rest into two unbalanced conditions of motion." [Atomic Suicide, Chapter 4 - The True Nature of This Mind and Motion Universe - part VI, page 86]

"Man's concept of gravity as being an attractive force which pulls inward from within, is diametrically opposed to the facts of Nature. Gravity is the controlling center of a compressive electric force which is exerted from the outside of matter instead of within it." [Atomic Suicide, page 104]

"Thus it is that gravity is seemingly created to control the compressive force of Nature and the regiving reaction of the creation of an expansive force. Expansion is the result of MIND-DESIRE TO GIVE by its outward explosive effect from its zero cathode. The re-giving of compressed energy, likewise, is an outward explosive effect, as electric compression ceases, and the result of that effect is to born its opposite and leave great black holes within compressed masses as they return to the zero of their Magnetic stillness." [Atomic Suicide, page 125]

"Gravity exerts no force, whatsoever, to either attract or repel. Gravity is a shaft of Magnetic stillness which has been extended two ways from zero in the cathode of the electric current, around which electric motion can simulate the power - or energy - of its Magnetic zero center. Gravity is motionless and changeless." [Atomic Suicide, page 139]

"The Gravity Center of every ring is its center of mind control
Electric Potential and gravity are 90° in opposition.
THIS MIND AND MOTION UNIVERSE" [Atomic Suicide, page 163]

"Gravity controls the moving universe but man has never known, nor even suspected, that his own immortality and gravity are ONE in their centering of his sensed-body." [Atomic Suicide, page 170]

Gravity really means a point, or shaft, that can be located in the invisible universe, where Mind desires to concentrate thought, and thought-power. You cannot see gravity but you can locate it at the very center of every creating thought-ring, which constitutes what we call bodies of matter. You cannot see Mind either, but you can locate Mind also, for Mind is also that center which balances, controls, surveys and motivates its electric thought-rings in their effort to simulate the Idea existent within that stillness, by fast or slow motion. [Atomic Suicide, page 176]

"Gravity and the Magnetic Light are ONE, but the connotation of gravity differentiates it from the word Mind, or Light, just as the word Soul differentiates it from the word God. They are the same, however, for God is the Universal Soul while Soul in man mean's Identity, or Being, as a unit of the Universal Being. The moment that electricity divides the One changeless condition into pairs it is necessary to balance and control those pairs. Gravity is the Magnetic control and balancer, although its power never multiplies or divides. Where gravity is stillness is. An area of stillness always surrounds gravity shafts. These areas are the holes which center the rings of electric potential which continually multiply compression, or divide it by expanding, in accord with the desires of Nature, or man, to manifest that all-power which is within, and omnipresent in all things." [Atomic Suicide, page 177]

The one most important thing to burn into your consciousness is to realize that wherever motion is it is centered by stillness, and that stillness is its CAUSE. The universe is composed of electric thought-rings of motion. Each thought-ring is centered and controlled by the Creator of that thought-ring. God creates His universe that way. You create your universe that may. It is God who sits there. It is the Magnetic Light of all-knowing, all-powerful Mind which sits there. We call that centering point gravity. The reason why we call it gravity is because there are adjacent thought-rings which have united together so closely that we think of them as mass, instead of rings. Each added ring of the mass has its Mind-center in its own plane. In a mass, therefore, there are seemingly so many Mind-centers of stillness that they constitute a shaft. The word gravity arises from this fact. Gravity is a shaft of Mind-controlling stillness. In that sense, gravity and God are one. Now you have the whole story except for one thought to complete it. Every point of that gravity point is the same point, for God's zero universe is omnipresent. [Atomic Suicide, page 177]

"Man makes a big gun by making a long tube which he seals at one end and places an explosive there. He even puts a twist in the bore of the gun; to accelerate the spin of motion around the still shaft which centers that tube. That motionless explosive occupies one still position in this zero universe until he ignites it. What then happens? A two directional explosion takes place. The recoil is equal to the discharge, so he might just as well have left both ends of the gun open as far as the effect of polarization is concerned. The recoil was the opposite direction of polarity, as that explosion began its division of stillness throughout the entire universe, at the speed of 186,400 miles per second.

Let us analyze what has happened. The center of the explosion is an unchangeable point of stillness in the Magnetic Light of Creation, but we will call it gravity because we are seemingly dividing it into a shaft. Because of the tube the explosion cannot expand symmetrically and radially from the point in space which it occupied while still, for it is not enclosed in a sphere. It is enclosed in a shaft. Its spinnings encircle the walls of the tube at ninety degrees to the still shaft, which is developed because the explosion can no longer be centered as one point in space, and, therefore, have but one center of gravity instead of many. It becomes a series of points in space which form a shaft. If you can now comprehend that if the explosion within that tube is obliged to change position and move its centering point of stillness, the projectile which moves is, likewise, a sequence of points of stillness? You cannot see a projectile being ejected from the other end, but its equivalent is in that recoil." [Atomic Suicide, page 291]