Chapter 4 - The True Nature of This Mind and Motion Universe - part VI, page 86 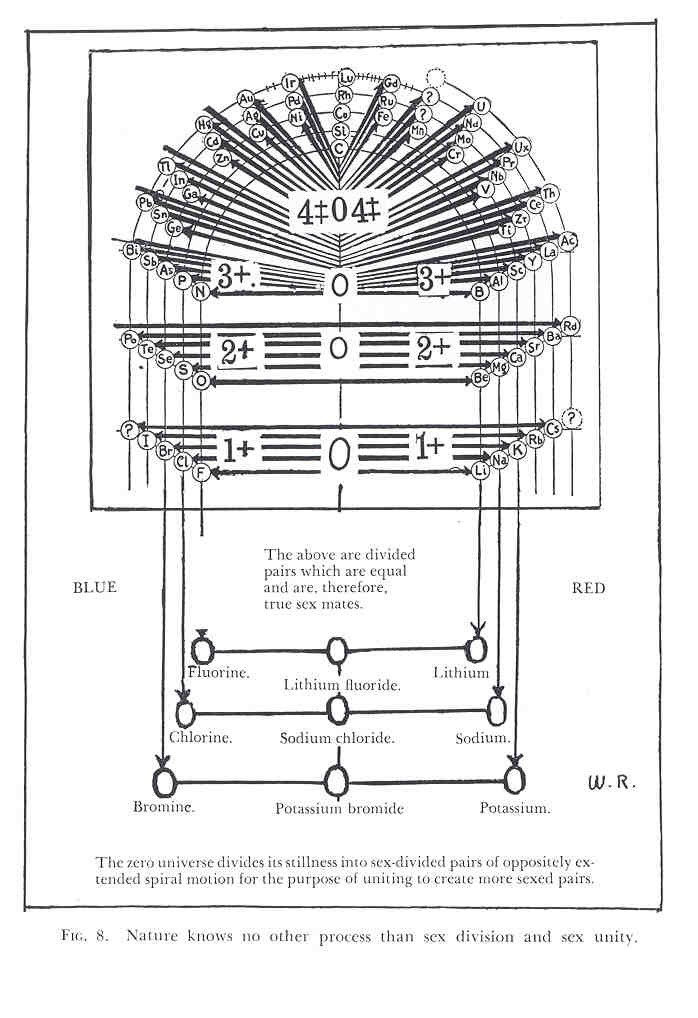 The zero universe divides its stillness into sex-divided pairs of oppositely extended spiral motion for the purpose of uniting to create more sexed pairs.

Fig. 8: Nature knows no other process than sex division and sex unity 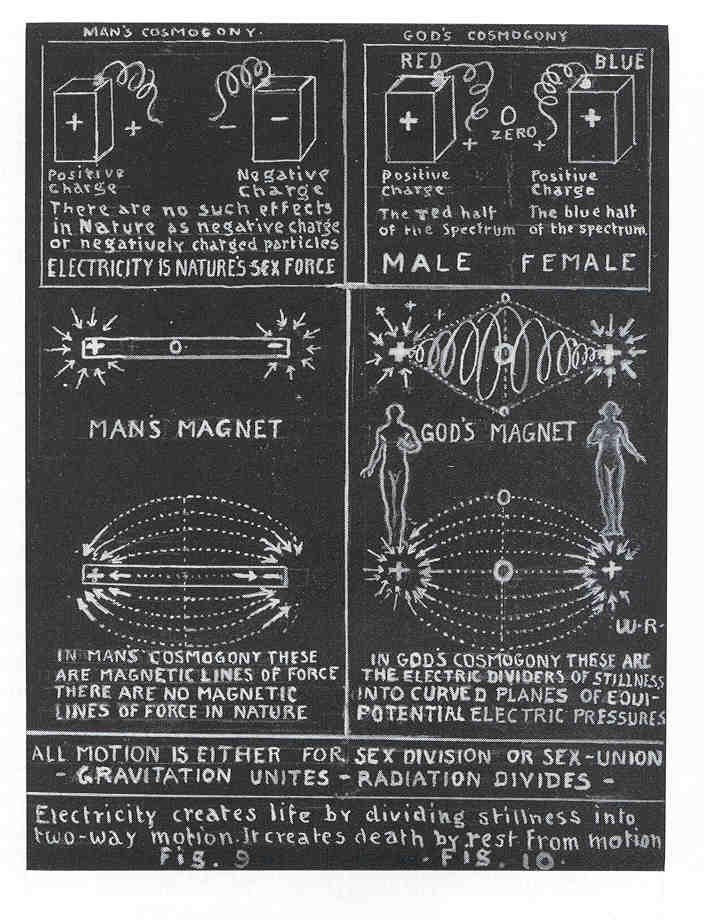 conditions. The division begins its tension at the cathode and multiplies that tension as the division extends from the cathode toward the anode. Electricity thus creates tensions and strains, which we call electric potential. Electric potential is the measure of compression at any one point in the universe. Gravity is evidenced wherever compression from without is maximum. Gravity is a focal point from which matter desires to explode outwardly. Gravity does not pull inwardly from within as the deceptive illusion of Nature would have you believe. Neither is it the attractive force which Newton's senses were deceived into believing, for a center of gravity is a point of maximum electric potential. Gravity never changes. It is never more or less. It is maximum everywhere. It is electric potential which changes by multiplying and dividing the measure of power it is able to express by drawing it from its gravity center of control. It is like the power of a man who can draw but little from the great omnipotence which centers him, as compared with another man whose knowledge enables him to draw more of it. Electric potential is the tension caused by the electric division of the ONE universal condition of rest into two unbalanced conditions of motion.

Polarity and sex are one. The two poles which unite are male and female opposites in all matter. The idea that sex is solely a characteristic of organic bodies is not a true concept. Sodium and chlorine are as male and female as man and woman are male and female. Every particle of matter in the universe is either male or female, and these pairs are electrically projected together in the ratios of force which Newton gave to the acceleration of gravity, and upon a multiplication of speed and potential principle, which Einstein gave in his Equation of 1905.

If, therefore, all motion is solely for the purpose of either seeking sex union or sex division, why should we not immediately remodel our thinking to conform with Nature's processes and now think of our divided, double Pressured universe as an electrically sex conditioned one? 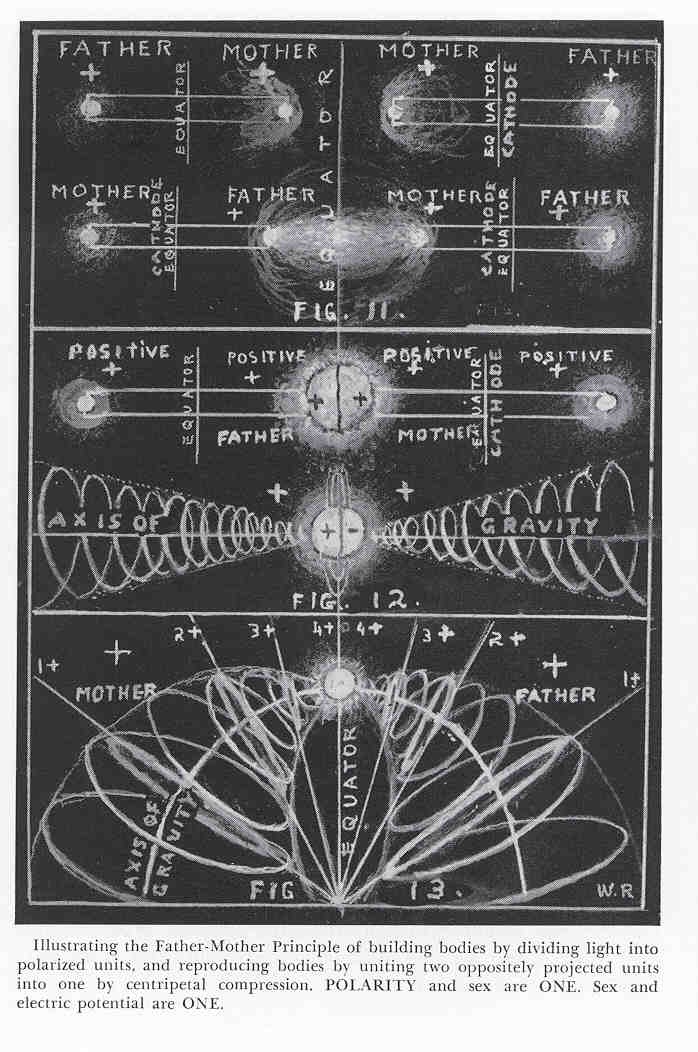 Illustrating the Father-Mother Principle of building bodies by dividing light into polarized units, and reproducing bodies by uniting two oppositely projected units into one by centripetal compression. POLARITY and sex are ONE. Sex and electric potential are ONE. 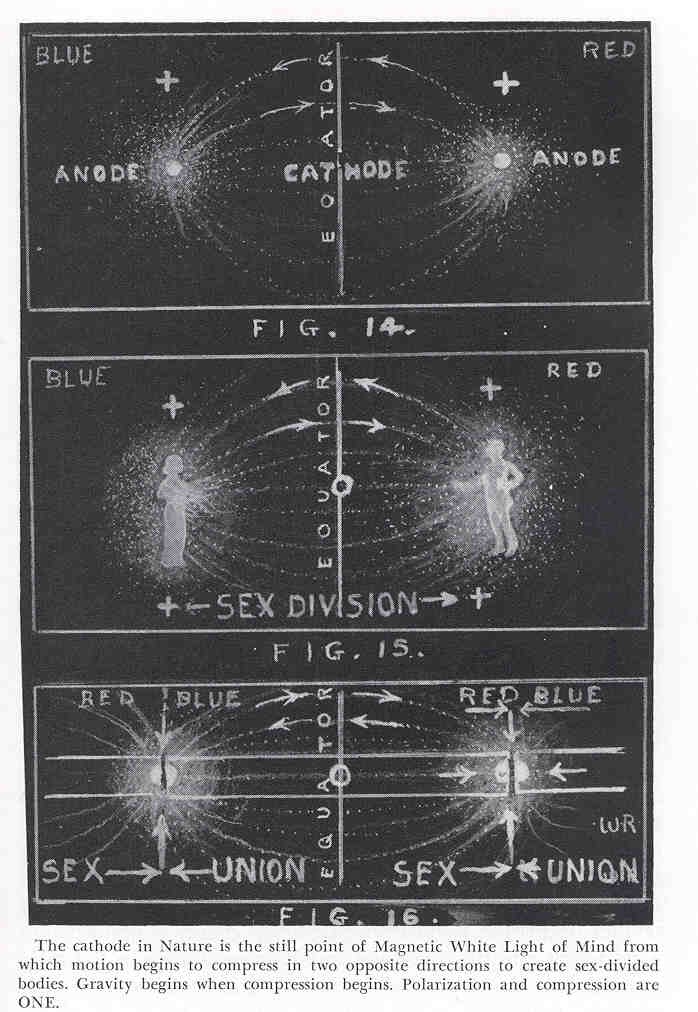 The cathode in Nature is the still point of Magnetic White Light of Mind from which motion begins to compress in two opposite directions to create sex-divided bodies. Gravity begins when compression begins. Polarization and compression are ONE.