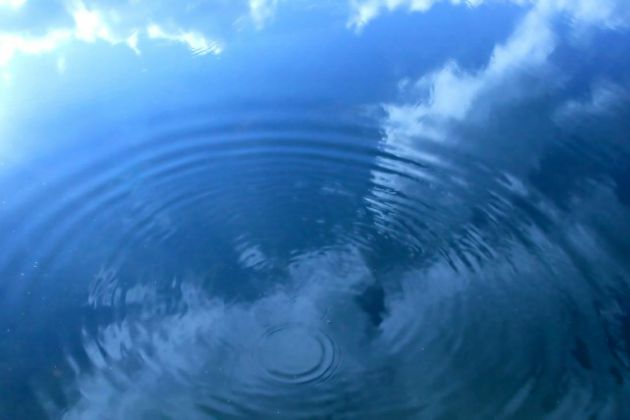 Symbollic only. There are no waves or motion in Stillness.
noun: calmness
noun: (poetic) tranquil silence
noun: a state of no motion or movement
Undifferentiated, Whole, Harmonic, undivided, One, Equilibrium, Scalar

Quiet thought or knowing as opposed to active thinking.

"Stillness is the cessation of Conflict, not Function." [Manly Palmer Hall]

The division of sexless Oneness into pairs could not be a part of Nature's process without also dividing the Oneness of Light. God's Magnetic Light is white because it is still. It has no tensions or strains in it, for it is not divided. It is invisible to the senses because it has no motion in it. The moment motion begins the Light of the Creator's energy is divided into pairs which multiply their red and blue intensities in the ratio of their extension from their cathode beginnings, just as electric potential multiplies its intensity for the same reason. [Atomic Suicide, page 92]

""To think what He IS, and what He KNOWS, into imaged-forms to manifest Him by motion, God divides His still Magnetic Light into electric mate pairs. He extends these pairs which He has divided, to two measured Magnetic foci which He, likewise, extends to balance this division, and multiplies their power of control over action to manifest His Omnipotence in the ratio of their extension.

The two Magnetic foci, which are Magnetic poles in man's knowing, are extended from His fulcrum stillness, along wave paths of His eternal stillness, to control their manifestation of His imaginings from within all creating bodies, and to balance their separateness from without."" [Atomic Suicide, page 107]

The one most important thing to burn into your consciousness is to realize that wherever motion is it is centered by stillness, and that stillness is its CAUSE. [Atomic Suicide, page 177]

"Matter begins by division of stillness in the inert gases and its projection by two-way motion into pairs of octave wave tones, which we call elements." [Atomic Suicide, page 253]

"Fig. 69. This is the way man divides stillness to produce motion.

"When our senses tell us that a speeding bullet is not a direction of motion it is difficult to think of it as stillness which is centering fast moving motion. It might help to remold your concept by imagining a motionless, floating cloud which changes its position because of a wind. The direction of motion is not in the cloud.

It is in the spiraling of the wind. The cloud is still in the same position in relation to gravity even though its position has been changed by motion, which is outside of itself, for it is still floating at rest. Even the slightest change in its position of stillness causes a spiral motion to encircle it and spin around it at an angle of 90 degrees from its gravity shaft, which extends from the earth. It may be quite an effort to comprehend that stillness cannot change, but can seem to." [Atomic Suicide, page 285-286]

"It may be quite an effort to comprehend that stillness cannot change, but can seem to." [Atomic Suicide, page 286]

"If we first grasp this one idea we will then know why electricity explodes from the inside outward to divide stillness into pairs of spinning rings, and we shall also know why electricity compresses inward from the outside to form solids. Let this be our first lesson in CAUSE." [Atomic Suicide, page 287]

"Spinning rings then move around a center, instead of an extended shaft of gravity, however, caused by the motion of the propellers. The plane itself would then occupy a position of stillness. Can you not see that it would always occupy a position of stillness, no matter where it seemingly moved? And can you not see that the spinning rings are the cause of that seeming motion? And can you not further see that the direction of motion is not in the projectile, or the plane, or of gravity, but solely in the divided pressures which cause that spinning motion?" [Atomic Suicide, page 292]

"Let us now take the plane and the projectile out of the tubes, which they centered. We refer you to the two cyclone diagrams again - figures 51 and 52. There is nothing there, whatsoever, which is materially objective at their center. There is only the stillness which we call the eye. There is but an explosion of hot air there, which causes expansion from the inside outward where cold air compresses it from the outside to inner density. Nature has made her two-way "gun" that way - a measure of desire-energy is at its center. The eye is a shaft of gravity. Gravity is omnipresent. What difference whether there is a plane, or bullet there, or not? If there is a plane there, its changed position in one direction is voided by an equal change in the opposite polarity direction. [Atomic Suicide, page 292]

ALL MATTER IN MOTION SEEKS REST

This is a universe of ONE THING. All matter which is electrically separated from that oneness seeks it. This is a fundamental principle and underlying desire of all Creation. It is as true of humans and their emotions as it is of matter.

We again repeat that electricity is a division of the One Light into two extensions of that Light projected through each other, each becoming the other alternately. The One Light is a pressureless and sexless condition. The two lights which are extended from the one are opposed pressures and opposed sexed conditions.

Thus there are but two conditions of matter - either expanding from stillness or contracting toward stillness. Each condition arises from the other. The instant it becomes its own opposite it gets as far away from that opposite as is necessary to find balance in a like condition. It seeks its like condition to find rest in a balanced condition and not because the matter of it is attracted by the matter it seeks. A log floating down stream is seeking a balanced condition and is not being attracted by the dam or by other logs.

These opposites represent the compression-extension father-mother principle which integrates light into solids and disintegrates it into vapors and gases. [Walter Russell, The Secret of Light, pages 155-156]

"To polarize means to divide stillness into opposing pulsing extensions. It is like extending a lever from a fixed fulcrum and setting it in motion to express the idea which is in the still fulcrum." [Russell, The Secret of Light, page 209]

Christ Returns - Speaks His Truth
"Creation is the product of PRIMARY IMPULSES working individually and together - making impressions upon the other, fulfilling inbuilt needs imprinted within consciousness - these needs being, at the outset to increase and experience self-expression leading to further separation then - to restore a sense of inner security and comfort - to be re-united within the harmony of UNIVERSAL CONSCIOUSNESS. Out of this driving force for a re-united harmony of being, came the male-female drive for re-union to recapture the bliss which is buried in the soul consciousness." [Christ Returns - Speaks His Truth, Letter 5, page 23]

"Bear in mind, at all times, that your SOURCE of BEING is in two states -

in equilibrium and activity.

The ACTIVE state of your SOURCE of BEING is the dimension in which you have been conceived and given individualization.
The EQUILIBRIUM of UNIVERSAL CONSCIOUSNESS is the dimension of perfect silence and stillness, in which the underlying IMPULSES OF CREATIVITY are locked together in an embrace of mutual restraint." [Christ Returns - Speaks His Truth, Letter 9, page 8]