Motion that is continuous such as natural cycles:
1 - the earth spinning and revolving around the Sun.
2 - The Sun emitting continuously various forms of energy.
3 - atomic and molecular motions.
4 - flowing river as long as it has water sufficient to do so.
5 - Evaporation from oceans and condensation as rain.
What is it about the above dynamics and systems that makes their actions continuous? 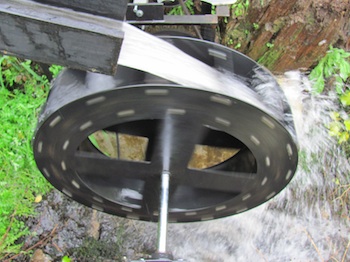 
Continuous Motion is not the same as Perpetual Motion which is nonsense based on the definitions given, yet continuous motion does exist. [See Neutral Center and Laws of Thermodynamics]

Keely
"In commercial use Keely expects that when the motion has been once set up, in any of his machines, it will continue until the material is worn out. It is this claim which has caused Keely to be classed with perpetual motion seekers." [Progressive Science]

JOHN ERNST WORRELL KEELY - the discoverer of compound interetheric force, as the result of more than 20 years of persistent effort to apply this force to the operation of machinery has, at last, been enabled to produce partial continuity of motion in his engine, but up to this time, he has not so mastered this subtle force as to control reversions. The development of his various discoveries has been one uninterrupted work of evolution, reaching, within the last year, he thinks, the sphere of perfect vibratory sympathy, both theoretically and practically. The proof of this is found in the fact that he now transmits vibrations along a wire, connected at one end with the vibratory machine which is the source of power and at its other end with the engine or cannon, as the case may be, which is operated by such vibratory power. Until recently Keely stored force, as he generated it, in a receiver, and experiments were made by him in the presence of thousands at various times for the purpose of testing the operations of this force, liberated in the presence of the audience and stored up in this small receiver. The editor of the Scientific American thus describes what took place: [Snell Manuscript - The Book, page 3]

"When the proper impulse is given to induce the rotation with pure alternating corpuscular action, the condition of action become perpetual in their character, lasting long enough from that one impulse to wear out any machine denoting such action, and on the sympathetic stream eternally perpetual. The action of the neutral or focalizing centers represents molecular focalization and redistribution, not having any magnetism associated with them, but when the radiating arms of their centers are submitted to the triple compound vibratory force, representing their mass thirds, they become magnetic and consequently cease their rotation. Their rotation is induced by submitting them to three different orders of vibration, simultaneously giving the majority to the harmonic third." (Keely) [Snell Manuscript - The Book, DISTURBANCE OF MAGNETIC NEEDLE, page 8]

"When the proper impulse is given to induce the rotation with pure alternating corpuscular action, the conditions of action become perpetual in their character, lasting long enough from that one impulse to wear out any machine denoting such action, and on the Sympathetic Stream eternally perpetual." [Keely in Keely and His Discoveries]

"Ignorant, indeed, of the nature of Mr. Keely's work must those men be who accuse him of 'abandoning his base' or 'principle', each time that he discovers his mistakes, and using them as stepping-stones to approach nearer and still nearer to his goal: reproaching him, even, for keeping his own counsel, until certainty of success rendered it prudent for him to make known that, in changing his field of experiment from positive attraction to negative attraction, he had succeeded in his efforts to produce continuity of motion." [Etheric Force Identified as Dynaspheric Force]


Schauberger
doing we have merely to brake the continuously running bio-machines with a heavy operating load in order finally to solve the whole problem of power and fuel in a truly super-ideal way for through these same forces the diverse foodstuffs, the various forms of growth also come into being, which are known to be endowed with these natural formative and levitative forces for the duration of life. Being thus endowed, they bind a major portion of these elemental levitative forces, or brake them by means of their weight. For this reason all the more regrowth must occur, the greater the production of formative and levitative forces through cycloid-space-curve-motion. Conversely, because of this increase in raw materials, increased stocks of quality matter will subsequently be produced through which the levitational forces will again be intensified. [The Energy Evolution - Harnessing Free Energy from Nature, New Forms of Motion and Energy]

To put it briefly and simply: We have been taught to wind up the ur-works like a clock, i.e. axially->radially. However, the ur-works that maintain the clock-springs of hunger and love in constant motion must be wound up radially->axially, because only thus is it possible to enable the suctional components to prevail, which produce levitism = upwardly streaming magnetism. [The Energy Evolution - Harnessing Free Energy from Nature, Magnetism - Electricism]