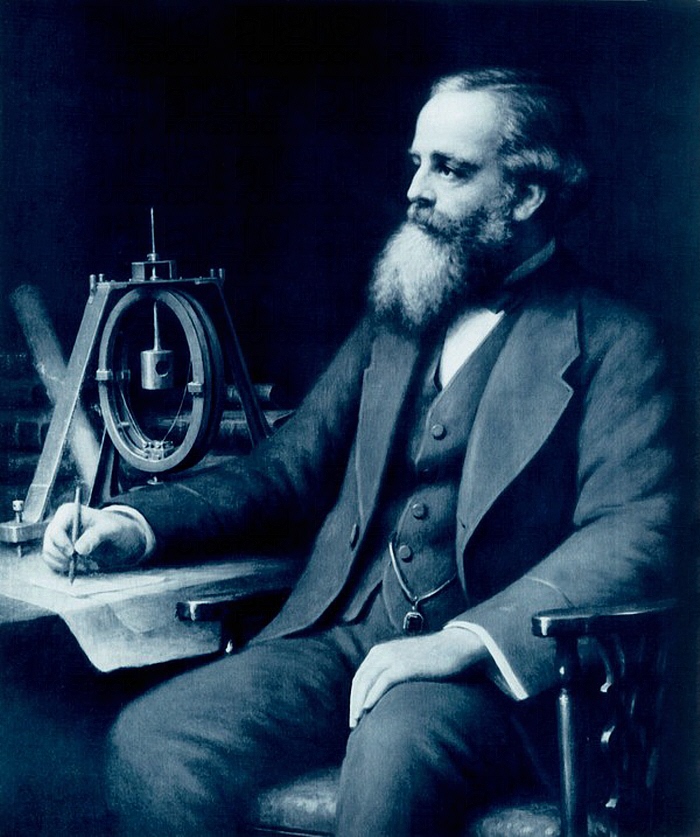 James Clerk Maxwell (13 June 1831 - 5 November 1879) was a Scottish theoretical physicist and mathematician. His most important achievement was classical electromagnetic theory, synthesizing all previously unrelated observations, experiments and equations of electricity, magnetism and even optics into a consistent theory. His set of equations - Maxwell's equations - demonstrated that electricity, magnetism and even light are all manifestations of the same phenomenon: the electromagnetic field. From that moment on, all other classic laws or equations of these disciplines became simplified cases of Maxwell's equations. Maxwell's work in electromagnetism has been called the "second great unification in physics", after the first one carried out by Isaac Newton. (WikiPedia)

James Clerk Maxwell
"The experimental investigation by which Ampere established the law of the mechanical action between electric currents is one of the most brilliant achievements in science. The whole, theory and experiment, seems as if it had leaped, full grown and full armed, from the brain of the 'Newton of Electricity.' It is perfect in form, and unassailable in accuracy, and it is summed up in a formula from which all the phenomena may be deduced, and which must always remain the cardinal formula of electro-dynamics." [James Clerk Maxwell]

Keely
"Clerk Maxwell seems, when theorizing on sound transmission by an atmospheric medium, not to have taken into consideration the philosophy attending the phenomena of the origination of electric streams in celestial space. Light is one of the prominent evolved mediums in electric action, and is evolved by corpuscular bombardment induced by sympathetic streams acting between the neutral centres of planetary masses, all of which are under a condition of unstable equilibrium. These unstable conditions were born in them, and were thus designed by the Architect of Creation in order to perpetuate the connective link between the dispersing positive and the attractive negative. The action that induces this link I call sympathetic planetary oscillation." [Vibratory Physics - The Connecting Link between Mind and Matter]

Hughes
The tones between the seven white notes of keyed instruments, and the tints and shades between the seven colours, cause the multequivalency of colours and of tones; consequently every colour, as every musical harmony, has the capability of ascending or descending, to and fro in circles, or advancing and retiring in musical clef. It is a curious coincidence that Wünsch, nearly one hundred years ago, believed in his discovery of the primary colours to be red, green, and violet; and in this scheme, red, answering to the note C, must necessarily be the first visible colour, followed by green and violet, but these not as primary colours, all colours in turn becoming primaries and secondaries in the development of the various harmonies. To gain facts by experiment, the colours must be exactly according to natural proportions—certain proportions producing white, and others black. In this scheme, green and red are shown to be a complementary pair, and therefore (as Clerk Maxwell has proved) red and green in right proportions would produce yellow. The same fact has been proved in Lord Rayleigh's experiments with the spectroscope. Yellow and ultra-violet, [Harmonies of Tones and Colours, On Colours as Developed by the same Laws as Musical Harmonies3, page 20]