Keely
"Molecular repulsion Keely states to be caused by electromagnetic radiation. "Any metallic mass can be so impregnated with certain vibrations as to assume the mental qualities of repulsion and attraction." He terms the "radiating" vibrations as "positive" or "propulsive". Also, that like and unlike poles of a magnet will, contrary to accepted scientific belief, repulse each other regardless of their natural properties, when their differentiation induced by vibration becomes 66 2/3 of one pole against 100 of the other, and that when this differentiation becomes 33 1/3 of the one against 100 of the other, like poles will attract in the same manner that unlike poles have normal attraction. These ratios simply cause antagonism in one case and sympathetic attraction in the other, with consequent motion of their respective masses. Normally, however, the action of the magnetic flow is dual, being at the same time attractive and repulsive." [REPULSION - Snell] 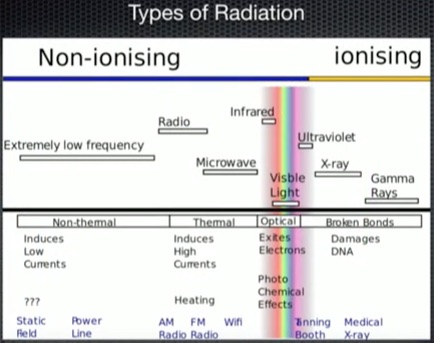 Tesla
"Now, there is a vast difference between these two, the electromagnetic and current energies. That energy which goes out in the form of rays, is, as I have indicated here, unrecoverable, hopelessly lost. You can operate a little instrument by catching a billionth part of it but, except this, all goes out into space never to return. This other energy, however, of the current in the globe, is stored and completely recoverable. Theoretically, it does not take much effort to maintain the earth in electrical vibration. I have, in fact, worked out a plant of 10,000 horsepower which would operate with no bigger loss than 1 percent of the whole power applied; that is, with the exception of the frictional energy that is consumed in the rotation of the engines and the heating of the conductors, I would not lose more than 1 percent. In other words, if I have a 10,000 horsepower plant, it would take only 100 horsepower to keep the earth vibrating so long as there is no energy taken out at any other place." [Nikola Tesla on AC, p. 140]

Electromagnetic radiation (EM radiation or EMR) is a form of energy emitted and absorbed by charged particles, which exhibits wave-like behavior as it travels through space. EMR has both electric and magnetic field components, which stand in a fixed ratio of intensity to each other, and which oscillate in phase perpendicular to each other and perpendicular to the direction of energy and wave propagation. In a vacuum, electromagnetic radiation propagates at a characteristic speed, the speed of light. 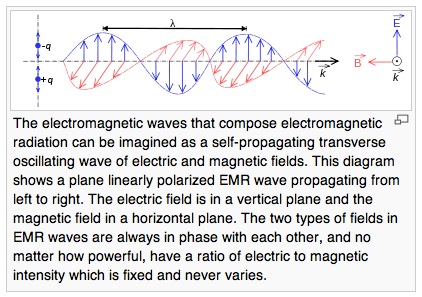 Electromagnetic radiation is a particular form of the more general electromagnetic field (EM field), which is produced by moving charges. Electromagnetic radiation is associated with EM fields that are far enough away from the moving charges that produced them, that absorption of the EM radiation no longer affects the behavior of these moving charges. These two types or behaviors of EM field are sometimes referred to as the near and far field. In this language, EMR is merely another name for the far-field. Charges and currents directly produce the near-field. However, charges and currents produce EMR only indirectly - rather, in EMR, both the magnetic and electric fields are produced by changes in the other type of field, not directly by charges and currents. This close relationship causes the electric and magnetic fields in EMR to stand in a fixed ratio of strengths to each other, and to be found in phase, with maxima and nodes in each found at the same places in space.

EMR carries energy - sometimes called radiant energy - through space continuously away from the source (this is not true of the near-field part of the EM field). EMR also carries both momentum and angular momentum. These properties may all be imparted to matter with which it interacts. EMR is produced from other types of energy when created, and it is converted to other types of energy when it is destroyed. The photon is the quantum of the electromagnetic interaction, and is the basic "unit" or constituent of all forms of EMR. The quantum nature of light becomes more apparent at high frequencies (or high photon energy). Such photons behave more like particles than lower-frequency photons do.

In classical physics, EMR is considered to be produced when charged particles are accelerated by forces acting on them. Electrons are responsible for emission of most EMR because they have low mass, and therefore are easily accelerated by a variety of mechanisms. Rapidly moving electrons are most sharply accelerated when they encounter a region of force, so they are responsible for producing much of the highest frequency electromagnetic radiation observed in nature. Quantum processes can also produce EMR, such as when atomic nuclei undergo gamma decay, and processes such as neutral pion decay.

EMR is classified according to the frequency of its wave. The electromagnetic spectrum, in order of increasing frequency and decreasing wavelength, consists of radio waves, microwaves, infrared radiation, visible light, ultraviolet radiation, X-rays and gamma rays. The eyes of various organisms sense a small and somewhat variable but relatively small range of frequencies of EMR called the visible spectrum or light.

The effects of EMR upon biological systems (and also to many other chemical systems, under standard conditions) depends both upon the radiation's power and frequency. For lower frequencies of EMR up to those of visible light (i.e., radio, microwave, infrared), the damage done to cells and also to many ordinary materials under such conditions is determined mainly by heating effects, and thus by the radiation power. By contrast, for higher frequency radiations at ultraviolet frequencies and above (i.e., X-rays and gamma rays) the damage to chemical materials and living cells by EMR is far larger than that done by simple heating, due to the ability of single photons in such high frequency EMR to damage individual molecules chemically. Wikipedia, Electromagnetic Radiation