What Electricity Is - Russell


"Electricity is the servant of the God-Mind. Electricity expresses the desire in the God-Mind for creative expression by seemingly dividing the One still light into transient waves of spectrum divided positive-negative colors of light." The Secret of Light, page 50

"Electricity is the motivative force which projects the One Light of Mind two ways to create cycles of light waves for the purpose of expressing thought cycles." The Secret of Light, page 57

"Electricity is the divider of the invisible white still magnetic light of gravity - which Mind is - into the red and blue halves of the visible light spectrum for the purpose of creating male and female bodies which alone constitute all matter." [Walter Russell, notation on chart, 1955.]

"Desire in the Light of Mind is the power quality of Mind. Desire is the soul of Mind; the will of Mind." Russell, The Secret of Light, page 113 See Scalar 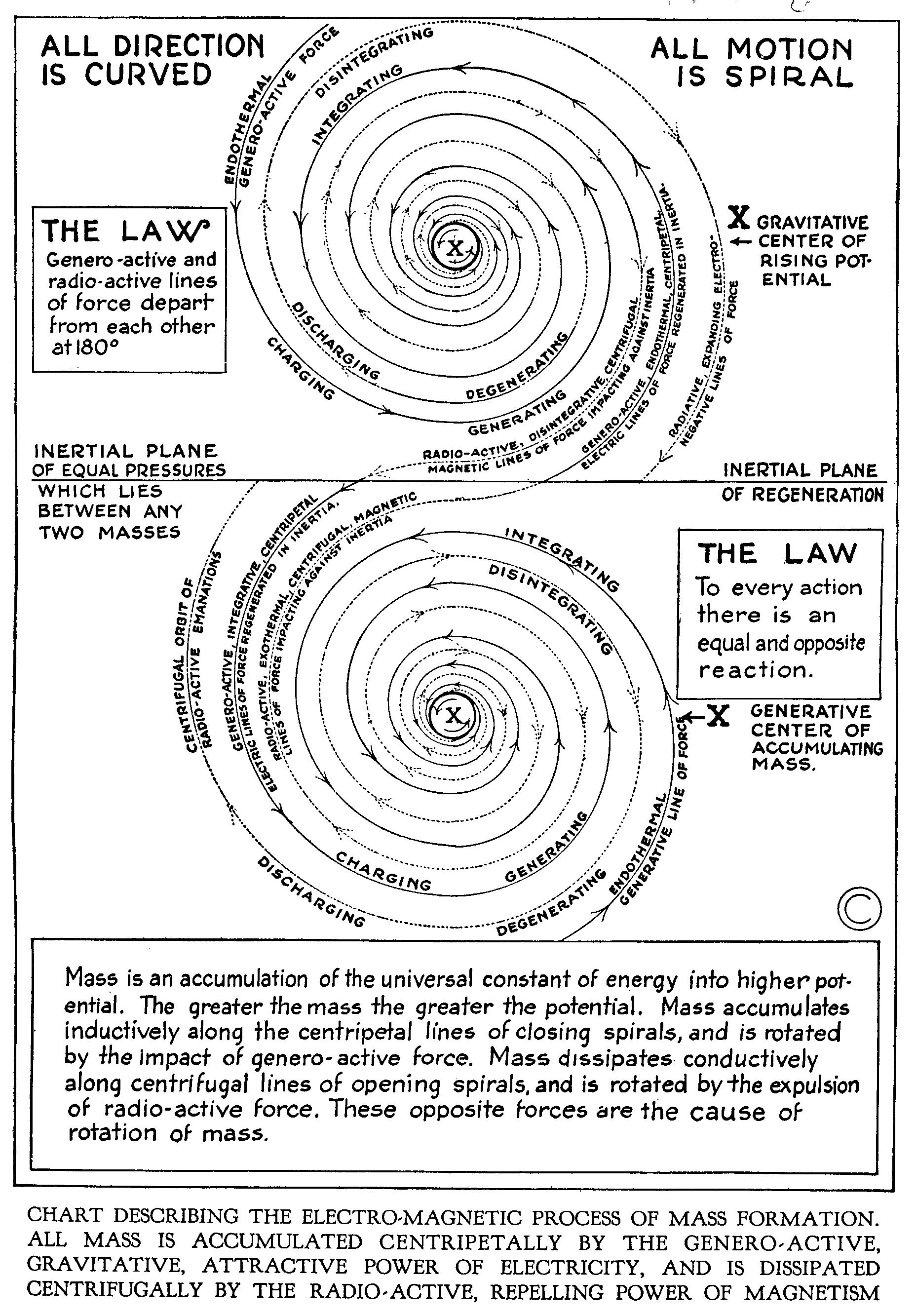 "As servant of Mind, electricity gives moving form to the idea by performing the work necessary to produce it." The Secret of Light, page 114 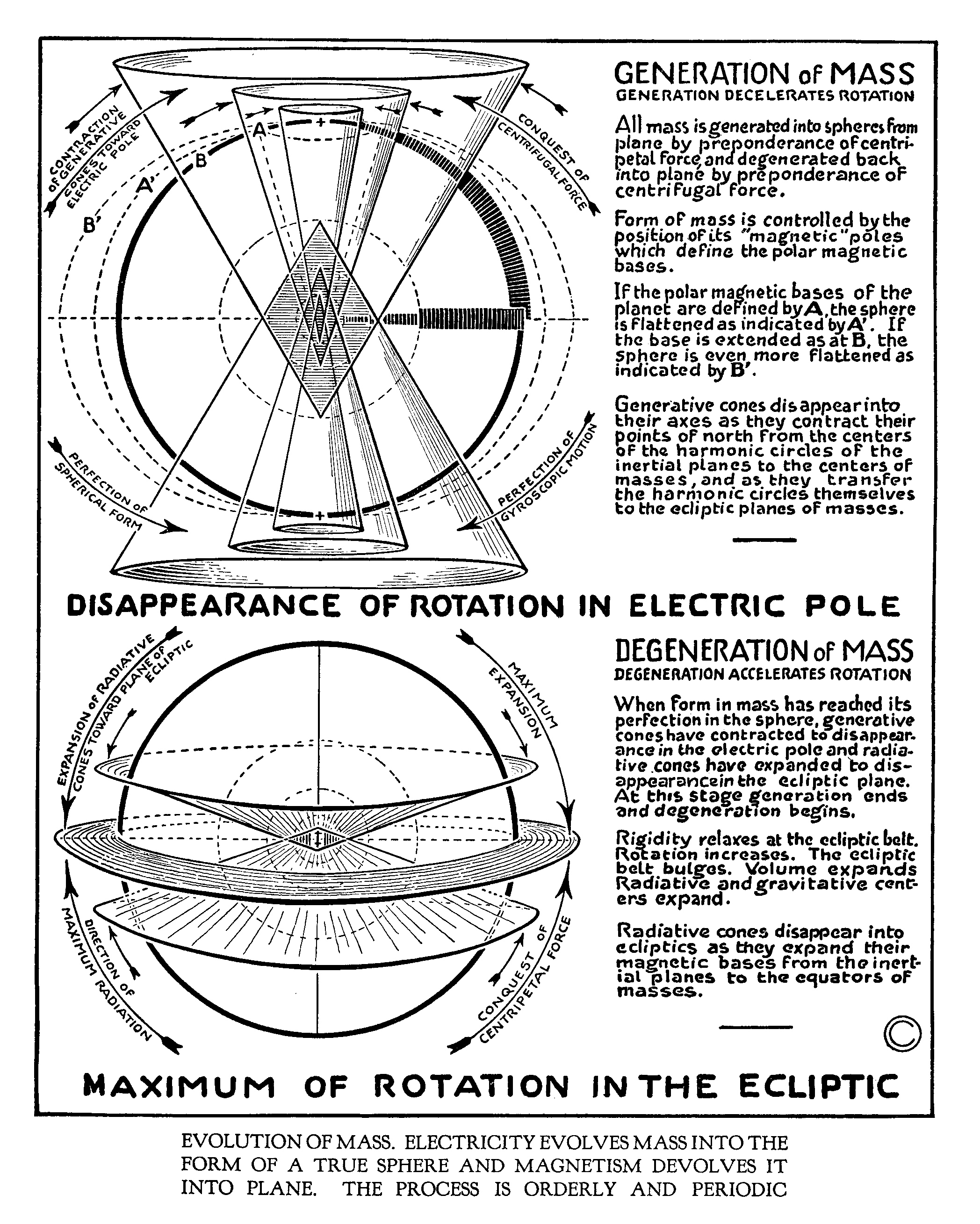 "The farther removed from rest, the greater the strain or tension. That which we call high electric potential is merely great strain to maintain a condition which is far from the condition of rest." The Secret of Light, page 139

"Electricity is the strain or tension set up by the two opposing desires of universal Mind thinking: the desire for balanced action and the desire for rest." The Secret of Light, page 139

"Electricity is an effect of strain, tension and resistance caused by the energy of desire in the Light of Mind to divide and extend the balanced unity of the ONE still Light of Universal Mind into pairs of many divided units of thinking-Mind." [A New Concept of the Universe, 1953]

courtesy University of Science and Philosophy

"Electricity is, therefore, a dual force which seemingly unbalances a condition of rest by dividing it into two opposite conditions and sets them in seeming motion." The Secret of Light, page 141

"As rest cannot be unbalanced save by illusion, electricity which causes that illusion has no existence." The Secret of Light, page 141

"Electricity is motion - any kind, or stage of motion. There cannot be two kinds of electricity. There is but one kind of electricity but that one kind multiplies its power to compress in the first half of its cycle and divides that power in the second half. Much confusion is caused by mistaking speed for high potential, and vise versa. For this reason it is well to exemplify our meaning by the following example: To create matter by the compression of four pairs of rings, projected from cathodes, the speed of the current around its shaft of gravity multiplies constantly and volume decreases as speed increases, until the collision takes place. Simultaneously the speed of rotation of units in the current slows down until the completed mass, after the collision, is its minimum. From that point on every effect is in reverse. Revolution around the shaft of gravity of each separate unit of the mass, including projections from it like planets and satellites, become increasingly slower while rotation of each mass upon its own shaft is increasingly faster. In this case speed results in a lowering of potential and a vast increase in volume." [Atomic Suicide, page 148]

"Electricity is the force used by the Creator to create bodies. Bodies are electrical disturbances in a vacuum. Electricity causes those disturbances." [Atomic Suicide, page 149]

"Electricity emerges from the omnipresent universe and disappears into it, as light appears and disappears in a vacuum tube. Electricity ceases to be electricity when it loses its power to move. When we speak of electric expansion it is in the sense that it is weakening, just as we say of a man who still lives, that he is dying. Electricity does not expand, nor is there a kind of electricity which does expand. It merely weakens by becoming lower in potential and speed." [Atomic Suicide, page 149]

"When an electronic tube is evacuated it means that the electric

commotion and tensions which were in it have been pumped out of it, leaving it in a zero state of rest. An electric current sent through it records within it the patterns of motion which caused the electric current. The vacuum condition insulates the new pattern of motion from any other patterns of motion, which would otherwise occupy the tube. That same pattern can be projected from that tube and repeat itself anywhere in the universe. That tube is a correct miniature zero universe of stillness which is creating a multiple universe of motion. If you will but study that effect you will gain much of Nature's processes. The more that science develops this principle of creating its own patterns by starting them from zero without interference from other pressures and patterns, and then multiplying them by gravity control within them, the more progress we will make in the practically new science of electronics." [Atomic Suicide, page 149-150]

"That means that electricity is the receiving and recording principle of Nature, while the zero universe is the broadcasting principle." [Atomic Suicide, page 151]

"In other words, electricity compresses motion into seeming form and effect. That is all it does, however. When that compressed motion is released, to produce a sound for example, the sound expands into the zero universe without the aid of any force, whatever." [Atomic Suicide, page 151]

The Ancients " taught that these forces which we call electricity and magnetism are one and the same, and that between them is "a neutral force." When a force becomes neutral it is inactive, and is no longer a force; consequently the name given is misleading, Keely calls this third element "the latent neutral," which is a better name for it. Dr. Seth Pancoast, in his book on the Kabbala, gives the Kabbalistic teachings in his own words, regarding nature's most powerful agent, the triune polar flow. He writes: "Electricity is a peripheral, polar force moving out of equilibrium, i. e., independently. Magnetism is a polar force moving in equilibrium. They are one and the same in essence and power; and their source is light:" the light from the great central sun of the universe, around which all solar systems revolve." [Bloomfield-Moore, What Electricity Is - Bloomfield Moore]