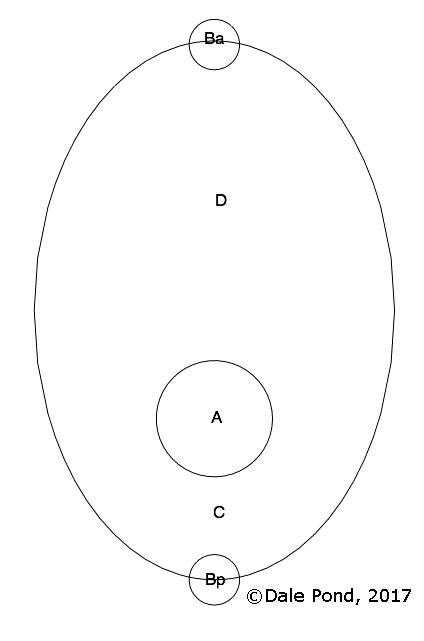 6/23/18 - It appears Keely's Dominant may very well be the nodes or neutrals or Russell's cathode or zero universe. There are good arguments for this approach. See the See Also list items which mention multiple centers, points and rings.

""All planetary masses Keely calls terrestrial, showing that the beauty of the celestial concordant chords of sympathy forming the harmonious connective link, is what may be denominated "the music of the spheres," and is seen in the alternate oscillating range of motion between the planetary systems, for at a certain range of the greater distance, harmony is established and the attractive forces are brought into action, and then, in the return towards the neutral centers when at the nearest point to each other, the opposite or propulsive force is brought into play." [Keelys Three Systems]

The implications of the above for physics, psychology and sociology are enormous.

There are different "kinds" or types of Centers. Singular = Neutral Center Compound = Two or more centers at the same location; i.e., coincident. Split = Two or more Centers Linear = Magnetic Shaft or Axis of Rotation as per (Russell). Linear does not necessarily mean straight. Focal Centers = Centers of Attraction or focalizing forces. Neutral Centers are places of coincident multiple Shafts or Axis of Rotation

One Becomes Two "The One begat the Two which begat the Three and from the Three all things are made." Lao Tse, 'The Tao te Ching' Tao Te Ching - Lao Tzu - chapter 42

The two initial states being 1) to separate or be individual and 2) be Unified or One are nothing more than tendencies or desires. The first, entropy, tends in a direction directly away from the center. The second, syntropy, tends to a direction towards the center. Ideally the two opposing become each other intermittently. Since there are only two states they are initially in perfect equilibrium one against the other. There is no motion or substance with the desire and tendency to direction and motion held latent. In this state of perfect latency there is pure potential waiting to be transformed into motion and matter by introducing idea (desire).

Desire and all other mental forces are of the interetheric and compound interetheric subdivisions. Therefore what we call desire is actually one of the currents of the sympathetic streams. [See especially Mind-desire, Desire]

"Electricity is the servant of the God-Mind. Electricity expresses the desire in the God-Mind for creative expression by seemingly dividing the One still light into transient waves of spectrum divided positive-negative colors of light." [The Secret of Light, page 50]

"We shall now build up the nature of the electric current to make its multiplying and dividing two-way principle more clearly understood. The very first principle to make clear is that electricity cannot run in a straight line. It always spirals around a hole in one direction to create its two-way effect." [Atomic Suicide, page 160]

"The physicist deflects electrons from their paths in vacuum tubes by holding a magnet near their path, and sincerely believes that the power of magnetism does that instead of electric polarity. He does not realize that the polarized condition in his "magnet" is an electrically divided equilibrium which has created two strong electric vortices, which his electrons are being pulled into just as particles floating in your bath tub are pulled into its spirally turning outflow." [Atomic Suicide, page 179]

"They were written to tell to a newly dawning Age that the nucleus of the atom is the still Magnetic Light of God, the Creator of the atom, and that the atom is the electrically divided pair of moving lights, which manifest His thinking." [Atomic Suicide, page 189]

"To better understand this take the cobalt out entirely. Only the zero of equilibrium is now there. Now turn on the current and you immediately divide that equilibrium, balanced zero into four opposite and equal pairs, all of which units are in perfect balance with their mates. The cathode is also in the exact middle instead of being off-center. That is the way Nature creates atoms. Cobalt is an unbalanced unit of a pair. It cannot be divided into equal pairs when used as a cathode." [Atomic Suicide, page 276]

"When our senses tell us that a speeding bullet is not a direction of motion it is difficult to think of it as stillness which is centering fast moving motion. It might help to remold your concept by imagining a motionless, floating cloud which changes its position because of a wind. The direction of motion is not in the cloud.

It is in the spiraling of the wind. The cloud is still in the same position in relation to gravity even though its position has been changed by motion, which is outside of itself, for it is still floating at rest. Even the slightest change in its position of stillness causes a spiral motion to encircle it and spin around it at an angle of 90 degrees from its gravity shaft, which extends from the earth. It may be quite an effort to comprehend that stillness cannot change, but can seem to." [Atomic Suicide, page 285-286]

"When you have fully grasped this fact, however, much that is complex will become simple. If these sincere young physicists had that Mind-awareness they would not have reasoned as they did in relation to an experiment, which they have mistaken to be something other than the simple, basic polarization process of Nature which extends the two-dimensional thought-ring universe into a three-dimensional, dual action universe." [Atomic Suicide, page 286]


GRAVITATION
is the desire of electricity to integrate into the appearance of form.

RADIATION
is the desire of magnetism to disintegrate into the disappearance of form.

The ONE force appears to divide itself into two forces

They are both the same force, electricity magnetism, but they are moving in opposite directions.

The result is an increasing intensity of opposition between the two forces as the cosmic pendulum swings away from inertia.

This increasing intensity of opposition between the gravitative desire of electricity to assemble the universe into the appearance of form by the generative force of attraction and the radiative desire of magnetism to disassemble into the disappearance of form by the expanding power of repulsion is the cosmic principle of creation. Generation contracts and radiation expands. These two motions-in-opposition constitute energy. Matter is merely the storehouse of energy, the record of states of motion.

The apparent division into apparent opposites is an absolute characteristic of all phenomena of nature. There are no opposites in fact. Out of any action the opposite reaction is born; and out of the reaction, the action is again regenerated. The cosmic pendulum ever swings from non-opposition through an orderly periodicity of opposition and back again for ever and ever - increasing opposition, or apparent separation into two, develops an increasing intensity of desire to return to the the inertial state of non-opposition. This desire is all that constitutes the force which man called energy. The opposites of energy developed by increasing desire and radiative energy which is separative and repels. Energy decreases as these opposites separate and increases as they amalgamate.

The Law - Everything that is, is of everything else that is, nothing is of itself alone.

The One force of the universe is the energy of thinking mind. There is no other energy.

Keely
"In this system (Sympathetic Vibratory Physics), force and energy are classified as opposites, working in antagonism to each other: Force as "a positive power which initiates aggregative motion, and resists separative motion, in three postules, of ponderable matter in the etheric medium;" Energy as "a negative power, which initiates separative motion, or disintegration, and resists aggregative motion, in three postules of ponderable matter, also of the etheric medium." [Bloomfield-Moore, What Electricity Is - Bloomfield Moore]