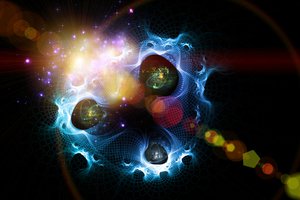 (click to enlarge) Subatomic or Quantum Chronology
This is a time line of the discovery of the divisibility of the atom. It is clear Keely was the first and most prolific discoverer of this phenomenon. Gustave Le Bon claimed first discovery status in 1896 but we can see Keely was prior by at least 20 years. Both Rutherford and J. J. Thomson also made the claim in 1896. [See Keely Chronology, Quantum Mechanics Timeline]

“How shall I illustrate this spiritual truth or wisdom? I will call it a king, who made a great feast or science for man his son. So he sends wisdom into the minds to call or reason about this great feast or science. They, that is their errors, prevented them from understanding, so he sent other ideas or arguments to convince the error so that it could understand. But the error made light of the truth and went their way and would not reason so that it could not get any foothold as yet. So the error ridiculed any idea that would rise in the minds that this truth ever could be reduced to a science. They discarded from their minds all idea of a science but admitted it as a gift or power. So when the king had failed to reduce this truth to a science because of the errors of the age, it was wroth and it sent forth its power and destroyed these errors that were murdering its science, and by its truth burnt up their old theory or society. Then said he, the wedding or science is ready to be understood by man (or the son).” [Phineas Parkhurst Quimby, A Parable] (underline added)

1898 Neon was discovered in 1898 by William Ramsay and Morris W. Travers.[29]
1899 Alpha particle, Rutherford[14]
1899 Photon discovered, Rutherford[14]
1899 Neutron term appears in literature[5]
1900, April Gustave Le Bon publishes his findings on intra-atomic energy.
1900 Max Planck propose the quantum of action.
1900 Henri Becquerel deduces beta rays and electrons are the same.
1900 Nikola Tesla writes The Problem of Increasing Human Energy
1902 - The cubical atom was an early atomic model in which electrons were positioned at the eight corners of a cube in a non-polar atom or molecule. This theory was developed in 1902 by Gilbert N. Lewis and published in 1916 in the article "The Atom and the Molecule" and used to account for the phenomenon of valency.
1903 Wright brothers first flight.
1903 Bosch - High voltage magnetos produce spark (plasma)
1903 - The plum pudding model is one of several scientific models of the atom. First proposed by J. J. Thomson in 1904 soon after the discovery of the electron, but before the discovery of the atomic nucleus, the model represented an attempt to consolidate the known properties of atoms at the time: 1) electrons are negatively-charged particles and 2) atoms are neutrally-charged.
1904 Abegg’s Rule by Richard Abegg.
1904 - Nagaoka rejected Thomson's model on the grounds that opposite charges are impenetrable. In 1904, Nagaoka proposed an alternative planetary model of the atom in which a positively charged center is surrounded by a number of revolving electrons, in the manner of Saturn and its rings.
1905 Albert Einsteinphoto-electric effect[14]
1905 Einstein’s General Theory of Relativity.
1908 Tunguska Event 30 June 1908
1909 Gustave Le Bon publishes The Evolution of Matter detailing his dissociation of matter in the 1890s.
1909 Robert Millikan electron's charge was more carefully measured.
1910 Claude displays first commercial neon lamp (excited gas).[29]
1911 Nucleus discovered. Ernest Rutherford[6]
1913 Atomic Theory with nucleus and orbiting electrons.
1913 - In atomic physics, the Rutherford–Bohr model or Bohr model or Bohr diagram, presented by Niels Bohr and Ernest Rutherford in 1913, is a system consisting of a small, dense nucleus surrounded by revolving electrons —similar to the structure of the Solar System, but with attraction provided by electrostatic forces rather than gravity. After the cubic model (1902), the plum-pudding model (1904), the Saturnian model (1904), and the Rutherford model (1911) came the Rutherford–Bohr model or just Bohr model for short (1913).
1913 Atomic Number. Broek, Moseley[7]
1913 Isotopes discovered, Soddy[8]
1913 Niels Bohr postulated that electrons resided in quantized energy states, with the energy determined by the angular momentum of the electron's orbits about the nucleus.
1917 Proton discovered, Rutherford[3]
1919 In 1919, Rutherford had succeeded in disintegrating nitrogen atoms with alpha particles emitted from decaying radium atoms. https://en.wikipedia.org/wiki/John_Cockcroft
1920 Neutron as part of nucleus, Rutherford[5]
1920 Proton term appears in literature.[3]
1925 Born, Heisenberg and Jordan formulate quantum mechanics.
1925 Nuclear Reaction reported.[3]
1926 Walter Russell publishes The Universal One uses the term "ether".
1928 Langmuir coins term "plasma".
1932 April 14. Walton and Cockroft split nucleus of atom.
1932 Neutron discovered, James Chadwick[5]
1932 The discovery of the neutron in 1932 revealed that atomic nuclei were made of protons and neutrons, held together by an attractive force. https://en.wikipedia.org/wiki/Nuclear_force
1938 Nuclear Fission discovered[13], [28]
1939 Manhattan Project begins.[31]
1941 28 June 1941, Roosevelt signed Executive Order 8807, which created the Office of Scientific Research and Development (OSRD), with Vannevar Bush as its director. [28]
1942 Self Sustaining nuclear reactor[12]
*Atomic Pile sustained fission first achieved December 2, 1942.
1945 First nuclear weapon, Trinity, July 16[11], [28]
*First atomic detonation , July 16, 1945 Alamogordo, New Mexico
*Atomic Bomb Detonation , August 6, 1945 Hiroshima, Japan [31]
1947 Kaon and pion discovered[26]
1953 Walter Russell publishes A New Concept of the Universe
1956 Fermi Liquid proposed [27] See Liquid Ether
1957 Walter Russell publishes Atomic Suicide
1961 Eight Fold particle classification proposed
1964 Quark Model proposed[26]
1968 Quark Model evidence found[26]
1970 By the 1970s, the quark model had been developed, by which the mesons and nucleons were viewed as composed of quarks and gluons. https://en.wikipedia.org/wiki/Nuclear_force