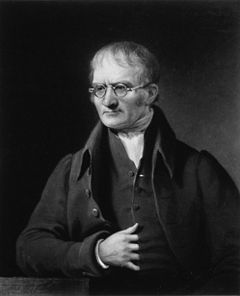 John Dalton FRS (6 September 1766 - 27 July 1844) was an English chemist, meteorologist and physicist. He is best known for his pioneering work in the development of modern atomic theory, and his research into colour blindness (sometimes referred to as Daltonism, in his honour). Wikipedia, John Dalton

In the early 1800s, John Dalton used the concept of atoms to explain why elements always react in ratios of small whole numbers (the law of multiple proportions). For instance, there are two types of tin oxide: one is 88.1% tin and 11.9% oxygen and the other is 78.7% tin and 21.3% oxygen (tin(II) oxide and tin dioxide respectively). This means that 100g of tin will combine either with 13.5g or 27g of oxygen. 13.5 and 27 form a ratio of 1:2, a ratio of small whole numbers. This common pattern in chemistry suggested to Dalton that elements react in multiples of discrete units — in other words, atoms. In the case of tin oxides, one tin atom will combine with either one or two oxygen atoms.

Dalton also believed atomic theory could explain why water absorbs different gases in different proportions. For example, he found that water absorbs carbon dioxide far better than it absorbs nitrogen. Dalton hypothesized this was due to the differences between the masses and configurations of the gases' respective particles, and carbon dioxide molecules (CO2) are heavier and larger than nitrogen molecules (N2). Wikipedia, Dalton, Atoms