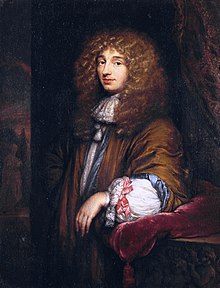 (click to enlarge) Christiaan Huygens, FRS - 14 April 1629 – 8 July 1695) was a Dutch physicist, mathematician, astronomer and inventor, who is widely regarded as one of the greatest scientists of all time and a major figure in the scientific revolution. He is known particularly as a physicist, astronomer, probabilist and horologist. In physics, Huygens made groundbreaking contributions in optics and mechanics, while as an astronomer Huygens is chiefly known for his studies of the rings of Saturn and the discovery of its moon Titan. As an inventor, Huygens improved the design of the telescope with the invention of the Huygenian eyepiece. His most famous invention, however, was the invention of the pendulum clock in 1656, which was a breakthrough in timekeeping and became the most accurate timekeeper for almost 400 years. Because he was the first to use mathematical formulae to describe the laws of physics, Huygens has been called the first theoretical physicist and the founder of mathematical physics.

In 1659, Huygens was the first to derive the now standard formula for the centripetal force in his work De vi centrifuga, a formula that was published in 1673 in the Horologium Oscillatorium, his book on pendulums. The formula played a central role in classical mechanics and became known as the second of Newton's laws of motion. Huygens was also the first to formulate the correct laws of elastic collision in his work De motu corporum ex percussion, but his findings weren't published until after his death in 1703. In the field of optics, Huygens is best known for his wave theory of light, which he proposed in 1678 and described in 1690 in his Traité de la lumière, which is regarded as the first mathematical theory of light. His theory, however, was initially rejected in favor of Newton's corpuscular theory of light, which explained light in terms of corpuscules. Until Augustin-Jean Fresnel adopted Huygens' principle in 1818 and showed that it could explain the rectilinear propagation and diffraction effects of light. Today this principle is known as the Huygens–Fresnel principle.

Huygens invented the pendulum clock in 1656, which he patented the following year. In addition to inventing it, Huygens continued his research on pendulums and wrote in 1673 an extensive analysis of the pendulum in his book Horologium Oscillatorium, a major work on pendulums and horology, which is regarded as one of the three most important works done in mechanics in the 17th century. While the first part of the book contains a description of clock designs, the most part of the book is an extensive analysis of pendulum motion and a theory of curves. In 1655, Huygens began grinding lenses with his brother Constantijn in order to build telescopes to conduct astronomical research. Huygens designed a 50 power refracting telescope with which he discovered that the ring of Saturn was 'a thin, flat ring, nowhere touching, and inclined to the ecliptic.' It was with this telescope that Huygens also discovered the first of Saturn's moons, Titan. Huygens eventually developed in 1662 what is now called the Huygenian eyepiece, a telescope with two lenses, which diminished the amount of dispersion.

As a mathematician, Huygens was a pioneer on probability and wrote his first treatise on probability theory in 1657 with the work Van Rekeningh in Spelen van Gluck. Frans van Schooten, who was the private tutor of Huygens, translated the work as De ratiociniis in ludo aleae ('On Reasoning in Games of Chance'). The work is a systematic treatise on probability and deals with games of chance and in particular the problem of points. The modern concept of probability grew out of the use of expectation values by Huygens and Blaise Pascal (who encouraged him to write the work).

The last years of Huygens, who never married, were characterized by loneliness and depression. As a rationalist, Huygens refused to believe in an immanent supreme being and couldn't accept the Christian faith of his upbringing. Although Huygens didn't believe in such a supernatural being, he did hypothesize on the possibility of extraterrestrial life in his Cosmotheoros, which was published shortly before his death in 1695. Huygens speculated that extraterrestrial life was possible on planets similar to Earth and wrote that the availability of water in liquid form was a necessity for life. Wikipedia, Christiaan Huygens