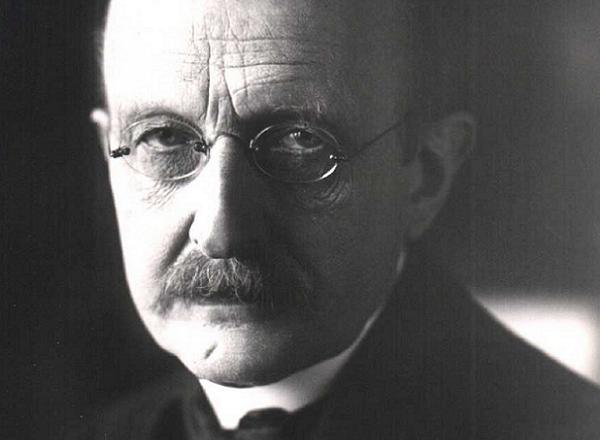 (click to enlarge) Max Karl Ernst Ludwig Planck (April 23, 1858 - October 4, 1947) was a German physicist who is regarded as the founder of the quantum theory, for which he received the Nobel Prize in Physics in 1918. [wikipedia]

On the fateful day of Dec 14, 1900, Max Planck presented one of the most revolutionary papers in the history of humankind, the paper that gave birth to the theory of quantum mechanics and changed our perception of the observed universe at the microscale in the most unexpected manner. Max Planck presented his paper titled Zur Theorie des Gesetzes der Energieverteilung im Normalspektrum, explaining the theory of the Law of Energy Distribution in Normal Spectrum at a meeting of the German Physical Society in Berlin. [anon]

“As a man who has devoted his whole life to the most clear headed science, to the study of matter, I can tell you as a result of my research about atoms this much: There is no matter as such. All matter originates and exists only by virtue of a force which brings the particle of an atom to vibration and holds this most minute solar system of the atom together. We must assume behind this force the existence of a conscious and intelligent mind. This mind is the matrix of all matter.” - Max Planck, Florence, Italy, 1944]