"Most scientific discoveries were similarly at first at variance with widely held belief. Even Planck's major finding that light was radiated in "quanta" or units of action, such that their energy divided by the frequency was always the same, was not generally accepted for 25 years." Arthur Young 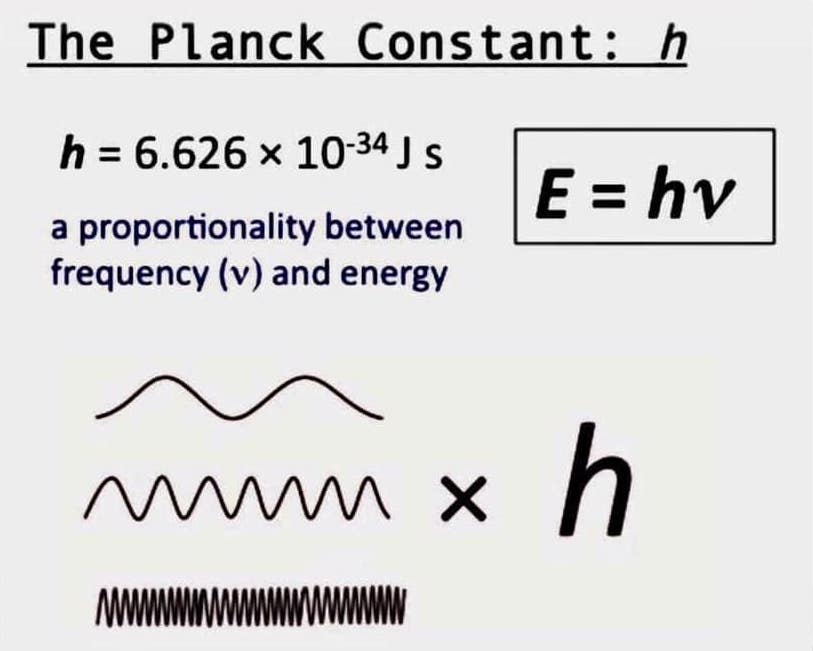 the constant of proportionality relating the energy of a photon to its frequency; approximately 6.626 x 10\-34 joule-second

Although many people believe that Planck's constant, h, was the first-discovered universal constant, in reality, it follows four others, as explained in Chapter 2. Also, it was invented, not discovered. If you are already acquainted with Planck's constant, no doubt you learned that it is a fundamental, universal physical constant of nature (FUPCON). This description seems to mean that it has existed in nature from time immemorial, and Planck just happened to discover it at the opportune time - during the birth of quantum theory. In reality, he invented it so that he could convert a particular proportion into an equation. Therefore, the term, fundamental universal physical constant of nature, or FUPCON, is a misnomer for constant of proportionality, which, itself, is a misnomer for collection of quantum-attribute factors.

Late in the nineteenth century, Planck sought to solve the problem of determining an equation for cavity radiancy (see Chapter 16). Many physicists before Planck had tried in this quest and failed. Finally, after Wilhelm Wien had produced an equation that almost fit the empirical data, Planck modified it in a simple way so that it did.

The units, kgÂ·m2Â·s-1, signify that h possesses dimensions of mass, M, multiplied by length squared, L2, divided by time, T, which is ML2T-1.

Planck never realized the true significance of his constant. It appears again in Einstein's equations concerning the photoelectric effect. It is the centerpiece in Heisenberg's formulation of his Uncertainty Principle. Yet, Einstein, and Heisenberg too, never discovered the real nature of Planck's constant. To date, I believe that no one has because, after searching the physical literature, I have found no mention of the real meaning of Planck's constant.

Until now, no one has realized that by knowing the true nature of Planck's constant and of the other FUPCONs, one is mentally enabled to grasp many loose ends of the description of the physical world and to tie them together into a more logical, coherent whole. This book describes that tying process and presents a new, more symmetrical model of Our Dual Universe than was, heretofore, possible to conceive.

We expose Planck's constant for what it really is. First, we wonder, how can Planck's constant be a FUPCON when it is multidimensional? Then, it seems to occur mostly as a factor in equations that pertain to electrons and photons; therefore, we can consider it to be an electrophotonic constant. Plausibly, Planck's constant is composed of a combination of the already known, quantum attributes of the electron. Hence, we try to break it down along dimensional lines into these more elementary electronic attributes.

We determine the value of h in terms of the quantum attributes of the electron. See Equations 6 through 10 in Chapter 2. Substituting appropriate SE values for the SI units in h , gives:

Therefore, h is not a true FUPCON and, actually, is composed of factors that are the electron's quantum attributes, which, in the SE of unit measures, are each equal to one. Factors that are equal to one do not change the value of an equation and can be removed from it. In essence, they do not exist.

You might ask: "What about the dimensions? Even if the SE value of h is equal to one, the dimensions, as represented by the SE units, meÂ·?e2Â·te-1, remain. If we remove unity-valued h from an equation, the units on either side of the equal sign no longer equal each other as the equal sign implies. Can we get away with this?"

Accepting the precedence set by historical convention, yes we can. In Appendix C, we notice that the equation, (F = m a), does not contain a FUPCON even though the newton (N), the SI unit of force, is equivalent to, but not actually equal to, kgÂ·mÂ·s-2.

Now that we know what Planck's constant really is, let us put it in its proper place in the world of physics:

1) Planck's constant is not an independent FUPCON of primary importance in quantum physics.

2) Planck's constant is a factorial composite of three attributes of the electron arranged in accordance with its dimensions of ML2T-1, and, probably, most significantly,

4) In any case, however, Planck's constant need never be used in an equation. Its quantized electronic attribute components can be used instead.

5) If the magnitude of Planck's constant were zero, light would not move, electrons would be massless, and the wavelength of an electromagnetic beam would be zero.

In sum, Planck's constant is not an important, all-pervading, fundamental, universal physical constant of nature (FUPCON). In reality, it does not exist as such. If we purged our physics books of all mention of Planck's constant, it would not be missed except by those interested in the nostalgic history of quantum physics. Actually, its absence clarifies our understanding of physical phenomena.

1) Planck's constant proves to have a very small value.

2) Planck's constant, h, is centrally involved in the Compton effect.

3) The quantity, h, is the central constant of quantum physics.

4) In a universe in which h = 0, there would be no quantum physics and classical physics would be valid in the sub-atomic domain.

5) (for the Bohr model of the hydrogen atom, in the equation of the angular momentum of the electron) ... Planck's constant appears again in a fundamental way.

6) Planck's constant, h, probably appears nowhere that has more, deep-seated significance than in the Uncertainty Principle.

8) The fact that the constant, h, is, like the speed of light, a universal constant serves to explain that ... .

9) If Planck's constant were zero, there would be no indeterminacy because we could predict both momentum and position with the utmost accuracy.

10) Heisenberg's equation is the second one (after cavity radiancy) that contains this mysterious Planck's constant.

Planck's Constant and the Energy of a Photon

In 1900, Max Planck was working on the problem of how the radiation of an object emits is related to its temperature. He came up with a formula that agreed very closely with experimental data, but the formula only made sense if he assumed that the energy of a vibrating molecule was quantized - that is, it could only take on certain values. The energy would have to be proportional to the frequency of vibration, and it seemed to come in little "chunks" of the frequency multiplied by a certain constant. This constant came to be known as Planck's constant, or h, and it has the value

This doesn't make any sense to me. I think I'll go ask Dr. Mahan what J means.

Yes, but it was an extremely radical idea to suggest that energy could only come in discrete lumps, even if the lumps were very small. Planck actually didn't realize how revolutionary his work was at the time; he thought he was just fudging the math to come up with the "right answer," and was convinced that someone else would come up with a better explanation for his formula.

I guess Einstein must have taken him seriously, though.

Quite seriously. Based on Planck's work, Einstein proposed that light also delivers its energy in chunks; light would then consist of little particles, or quanta, called photons, each with an energy of Planck's constant times its frequency.

In that case, the frequency of the light would make a difference in the photoelectric effect.

Exactly. Higher-frequency photons have more energy, so they should make the electrons come flying out faster; thus, switching to light with the same intensity but a higher frequency should increase the maximum kinetic energy of the emitted electrons. If you leave the frequency the same but crank up the intensity, more electrons should come out (because there are more photons to hit them), but they won't come out any faster, because each individual photon still has the same energy.

Quite right. Therefore, with a few simple measurements, the photoelectric effect would seem to be able to tell us whether light is in fact made up of particles or waves.

So did someone do the experiment? Which way did it turn out?

In 1913-1914, R.A. Millikan did a series of extremely careful experiments involving the photoelectric effect. He found that all of his results agreed exactly with Einstein's predictions about photons, not with the wave theory. Einstein actually won the Nobel Prize for his work on the photoelectric effect, not for his more famous theory of relativity.

Then light is made of particles! But wait...what about the two-slit experiment? I don't see how light could make an interference pattern like that, unless it was made of waves.

Yes, I'm afraid it's a bit more complicated than that. Some experimental results, like this one, seem to prove beyond all possible doubt that light consists of particles; others insist, just as irrefutably, that it's waves. We can only conclude that light is somehow both a wave and a particle - or that it's something else we can't quite visualize, which appears to us as one or the other depending on how we look at it.

Modern Physics is largely based upon “Planck’s constant”...too few know that Planck “made it up” because he refused to accept Bohr’s model; for which, Planck could not figure out the Bohr Radius. Nonetheless, the Bohr radius was ignored because is can be calculated without Planck’s constant...and to discard Planck-centered “constants” is heresy in today’s scientism. Here is the formula for Bohr Radius ignoring Planck...it is far more precise than formulas using Planck’s lazy-method of “universal constants”.
b is the Bohr radius, e the unit electronic charge, m the electron mass, ωL = 2π fL, fL is the frequency of light emitted in a transition characterized by principal quantum number n1, n2, the above equation allows a new computation and direct measurement of the Bohr radius in terms of emitted light. A new deduction of Planck’s constant and of electron total energy are also given. Derivations appear in the author’s textbook, Electronic Thermodynamics, (Pacific States University Press, Los Angeles, California 1973), and in the new complete Philosophy and Unified Science. [Jason Verbelli]

THE SECRET OF ENERGY
The secret of energy is a stationary principal which is everywhere at once.

122 years have passed since Max Planck discovered the quantum.

Planck’s constant is an eternally recurring movement breathing the universe to life; each repeat the same quantum of energy configured differently.

The universe is the secondary result of quantum repetition and recognizing the quantum singularity reveals its cause:

Because the quantum is a single event whose repetition brings forth the universe it follows that its cause is without movement/still.
Thus, the stationary principal is everywhere at once – in your head advising you not to accept the above logic.

We are all linked by a fabric of unseen connections. This fabric is constantly changing and evolving. This field is directly structured and influenced by our behavior and by our understanding. [David Bohm]