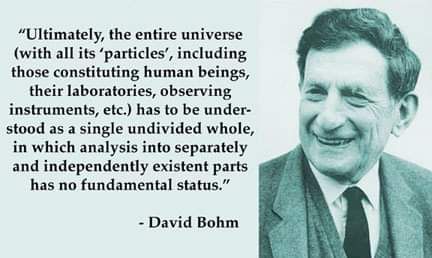 David Bohm, one of the most distinguished theoretical physicists of his generation, will be remembered above all for two radical scientific theories: the causal interpretation of quantum physics, and the theory of the implicate order and undivided wholeness.

He believes that life and consciousness are enfolded deep in the generative order and are therefore present in varying degrees of unfoldment in all matter, including supposedly 'inanimate' matter such as electrons or plasmas. He suggests that there is a 'protointelligence' in matter, so that new evolutionary developments do not emerge in random fashion but creatively as relatively integrated wholes from implicate levels of reality. The mystical connotations of Bohm's ideas are underlined by his remark that the implicate domain -could equally be called Idealism, Spirit, Consciousness, separation of the two - matter and spirit - is an abstraction. The ground is always one.

As with all truly great thinkers, David Bohm's philosophical ideas found expression in his character and way of life. His students and colleagues describe him as totally unselfish and non-competitive, always ready to share his latest thoughts with others, always open to fresh ideas, and single-mindedly devoted to a calm but passionate search into the nature of reality. In the words of his students, -He can be characterized as a secular saint.

Bohm believed that the general tendency for individuals, nations, races, social groups, etc., to see one another as fundamentally different and separate was a major source of conflict in the world.

It was his hope that one day people would come to recognize the essential interrelatedness of all things and would join together to build a more holistic and harmonious world. What better tribute to David Bohm's life and work than to take this message to heart and make the ideal of universal brotherhood the keynote of our lives.

From: David Bohm and the Implicate Order, by David Pratt
Reprinted in the Theosophical Digest, 1st quarter, 1999