Could Keely's ideas about the Mind and Brain be an answer for autism? This video shows a dis-coordination between an autistic's ego (sense of self; i.e., consciousness) and her body - not unlike what Keely describes below. https://www.facebook.com/photo.php?v=451214254956059


Keely on Brain Disturbance - Keely, writing on brain disturbance, says, "In considering the mental forces as associated with the physical, I find, by my past researches, that the convolutions which exist in the cerebral field are entirely governed by the sympathetic conditions that surround them.

"The question arises, what are these aggregations and what do they represent, as being linked with physical impulses? They are simply vibrometric resonators, thoroughly subservient to sympathetic acoustic impulses given to them by their atomic sympathetic surrounding media, all the sympathetic impulses that so entirely govern the physical in their many and perfect impulses (we are now discussing purity of conditions) are not emanations properly inherent in their own composition. They are only media - the acoustic media - for transferring from their vibratory surroundings the conditions necessary to the pure connective link for vitalizing and bringing into action the varied impulses of the physical.

"Thus, in Motor Ataxy a differentiation of the minor thirds of the posterior parietal lobule produces the same condition between the retractors and extensors of the leg and foot; and thus the control of the proper movements is lost through this differentiation. The same truth can be universally applied to any of the cerebral convolutions that are in a state of differential harmony to the mass of immediate cerebral surroundings. Taking the cerebral condition of the whole mass as one, it is subservient to one general head centre, although as many neutrals are represented as there are convolutions.

"The introductory minors are controlled by the molecular; the next progressive third by the atomic; and the high third by the Etheric. All these progressive links have their positive, negative, and neutral position. When we take into consideration the structural condition of the human brain, we ought not to be bewildered by the infinite variety of its sympathetic impulses; inasmuch as it unerringly proves the true philosophy that the mass chords of such structures are governed by vibratory etheric flows - the very material which composes them. There is no structure whatever, animal, vegetable, mineral, that is not built up from the universal cosmic ether. Certain orders of attractive vibration produce certain orders or structure; thus, the infinite variety of effects - more especially in the cerebral organs. The bar of iron or the mass of steel, have, in each, all the qualifications necessary, under certain vibratory impulses, to evolve all the conditions that govern that animal organism - the brain; and it is as possible to differentiate the molecular conditions of a mass of metal of any shape so as to produce what you may express as a crazy piece of iron or a crazy piece of steel; or vice versa, an intelligent condition in the same.

"I find in my researches, as to the condition of molecules under vibration, that discordance cannot exist in the molecule proper; and that it is the highest and most perfect structural condition that exists; providing that all the progressive orders are the same. Discordance in any mass is the result of differentiated groups, induced by antagonistic chords, and the flight or motions of such, when intensified by sound, are very tortuous and zig-zag; but when free of this differentiation are in straight lines. Tortuous lines denote discord, or pain; straight lines denote harmony, or pleasure. Any differentiated mass can be brought to a condition of harmony, or equation, by proper chord media, and an equated sympathy produced.

"There is good reason for believing that insanity is simply a condition of differentiation in the mass chords of the cerebral convolutions, which creates an antagonistic molecular bombardment towards the neutral or attractive centres of such convolutions; which, in turn, produce a morbid irritation in the cortical sensory centres in the substance of ideation; accompanied, as a general thing, by sensory hallucinations, ushered in by subjective sensations; such as flashes of light and color, or confused sounds and disagreeable odours, etc., etc.

"There is no condition of the human brain that ought not to be sympathetically coincident to that order of atomic flow to which its position, in the cerebral field, is fitted. Any differentiation in that special organ, or, more plainly, any discordant grouping tends to produce a discordant bombardment - an antagonistic conflict; which means the same disturbance transferred to the physical, producing inharmonious disaster to that portion of the physical field which is controlled by that especial convolution. This unstable aggregation may be compared to a knot on a violin string. As long as this knot remains it is impossible to elicit, from its sympathetic surroundings, the condition which transfers pure concordance to its resonating body. Discordant conditions, i. e., differentiation of mass, produce negatization to coincident action. [see resistance]

"The question now arises, What condition is it necessary to bring about in order to bring back normality, or to produce stable equilibrium in the sympathetic centres? [see disturbance of equilibrium]

"The normal brain is like a harp of many strings strung to perfect harmony. The transmitting conditions being perfect, are ready, at any impulse, to induce pure sympathetic assimilation. The different strings represent the different ventricles and convolutions. The differentiations of any one from its true setting is fatal, to a certain degree, to the harmony of the whole combination.

"If the sympathetic condition of any physical organism carries a positive flow of 80 per cent on its whole combination, and a negative one of 20 per cent, it is the medium of perfect assimilation to one of the same ratio, if it is distributed under the same conditions to the mass of the other. If two masses of metal, of any shape whatever, are brought under perfect assimilation, to one another, their unition, when brought into contact, will be instant. If we live in a sympathetic field we become sympathetic, and a tendency from the abnormal to the normal presents itself by an evolution of a purely sympathetic flow towards its attractive centres. It is only under these conditions that differentiation can be broken up, and a pure equation established. The only condition under which equation can never be established is when a differential disaster has taken place, of 66 2/3 against the 100 pure, taking the full volume as one. If the 66 2/3 or even 100 exists in one organ alone, and the surrounding ones are normal, then a condition can be easily brought about to establish the concordant harmony or equation to that organ. It is as rare to find a negative condition of 66 2/3 against the volume of the whole cerebral mass, as it is to find a coincident between differentiation; or, more plainly, between two individuals under a state of negative influence. Under this new system it is as possible to induce negations alike as it is to induce positives alike.

"Pure sympathetic concordants are as antagonistic to negative discordants as the negative is to the positive; but the vast volume the sympathetic holds over the non-sympathetic, in ethereal space, makes is at once the ruling medium and re-adjuster of all opposing conditions if properly brought to bear upon them." [Keely and His Discoveries]

"Our cerebral organ not only originates motion, heat, sound, light, chemical actions, magnetism, but it produces psychic forces, such as will, reasoning, judgment, hatred, love, and the whole series of intellectual faculties. They are all derived from the same source, and are always identical to each other, so long as the cerebral apparatus remains intact. The variations of our health alone are capable of causing a variation in the intensity and quality of our productions." [Vibratory Physics - The Connecting Link between Mind and Matter] 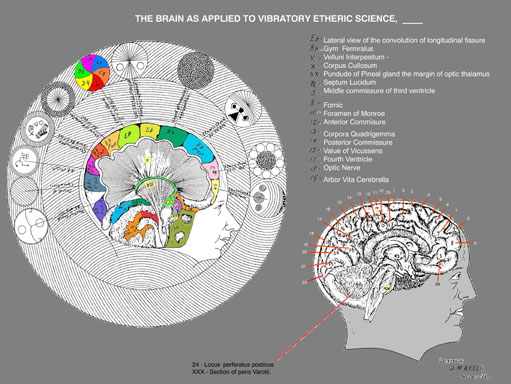 
The Mind or Consciousness permeates this mass of matter and collection of resonators. Importantly for SVP is the basic concept there are seemingly two main Minds or states of Mind. There is the Whole Mind and the Split Mind. The Whole Mind is undifferentiated as for instance the unseen light coming from the Sun is whole and unrefracted, undifferentiated. The Split Mind we refer to as the egoic or intellectual mind and is a subset or differentiated segment or aliquot part of the One Whole Mind.

The first is real while the latter is made-up or unreal. The Split Mind is as the notes split out from the keynote of a scale or the colors of a rainbow split out form the undifferentiated White Light of the Sun. 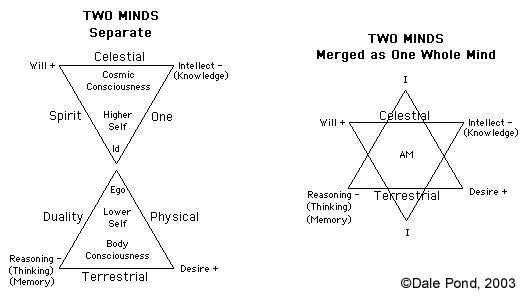 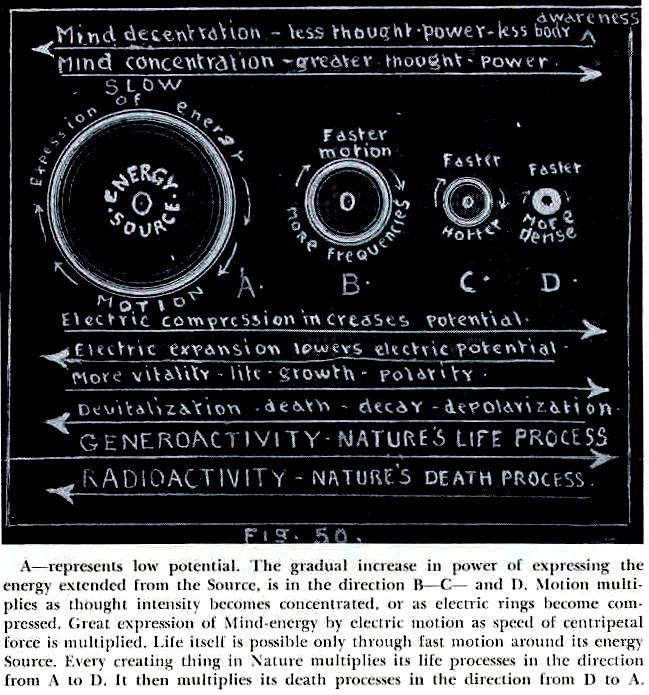 
"After the Big Bang, the Father-Mother Creative Process was divided into two different energies, continually working apart and together, independent yet mutually constrained to work together having individual characteristics or 'natures' - and different functions. Therefore, their work load was/is different yet indivisible." [Christ Returns - Speaks His Truth, Letter 5, page 23]


See this web page about Brain Scans and the Amygdala. They are quite similar to Keely's Brain Charts: