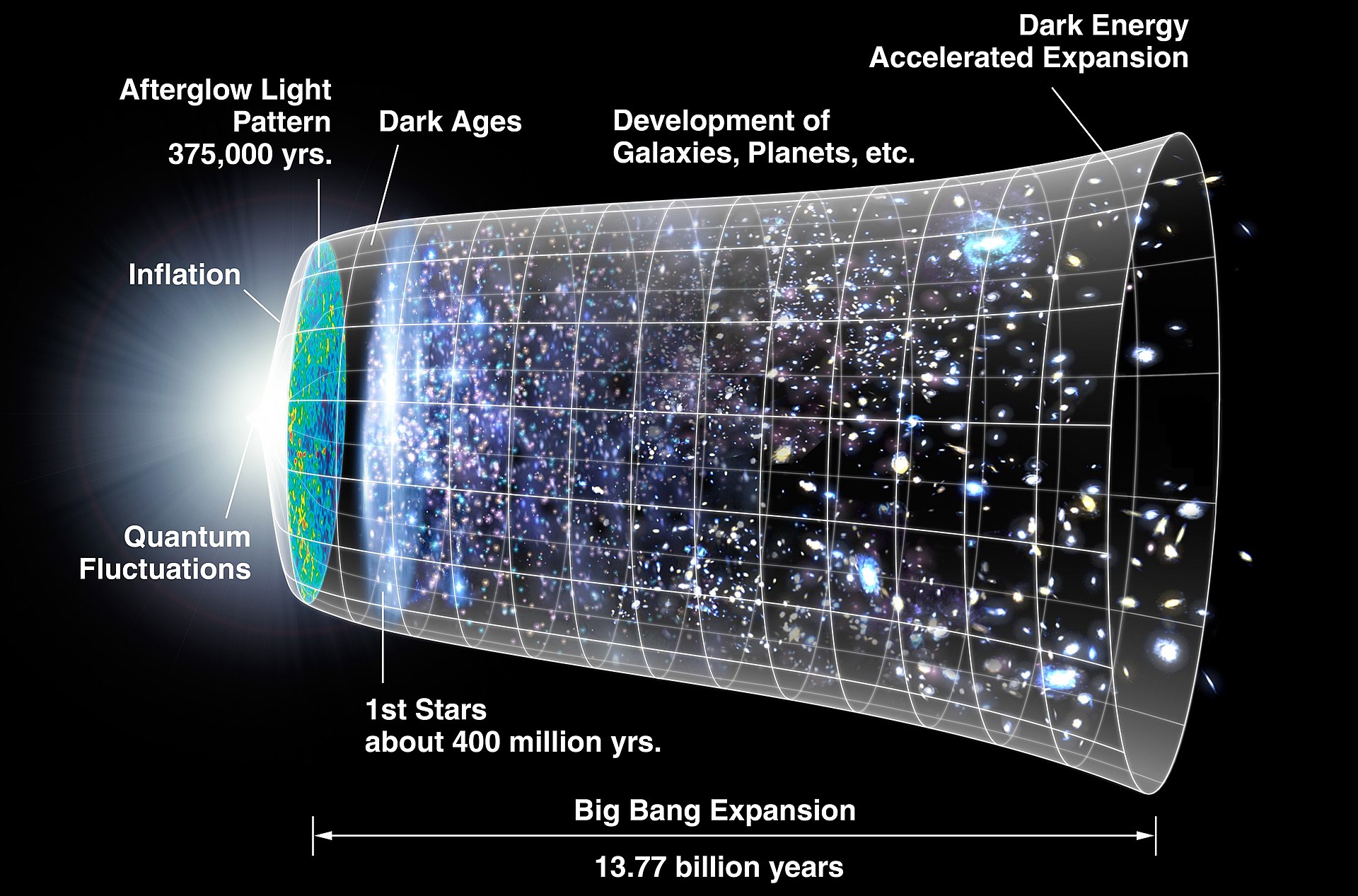 (click to enlarge)
Wikipedia
The Big Bang theory is the prevailing cosmological model for the universe from the earliest known periods through its subsequent large-scale evolution. The model describes how the universe expanded from a very high-density and high-temperature state [4plusplus], and offers a comprehensive explanation for a broad range of phenomena, including the abundance of light elements, the cosmic microwave background (CMB), large scale structure and Hubble's law. If the known laws of physics are extrapolated to the highest density regime [4plusplus], the result is a singularity which is typically associated with the Big Bang. Wikipedia, Big Bang

Christ Returns - Speaks His Truth
"As I have told you before, were individuality able to enter the UNIVERSAL DIMENSION of the MUTUALLY-RESTRAINED IMPULSES of 'Movement & Bonding' - the individuality would be immediately dissolved and returned to the equilibrium of UNIVERSAL CONSCIOUSNESS. Ponder the unimaginable immensity of Power contained within the MUTUAL-RESTRAINT of the TWIN IMPULSES in UNIVERSAL CONSCIOUSNESS which are primarily

The above describes the UNLIMITED UNIVERSAL DIMENSION before the BIG BANG!" [Christ Returns - Speaks His Truth, Letter 5, page 20]

"You now know that the Father-Mother Creative Process and the tools of physical creation are all in a state of equilibrium within the Universal Dimension, but now that equilibrium is to be exploded to bring about

INDIVIDUAL FORM.
You know, too, that since the Infinite Eternal IMPULSES are contained in a state of mutual restraint, these IMPULSES are of an unimaginable intensity of energy - against which your atomic energy contained within the splitting of an atom is a mere 'pouff', an infinitesimal twitch of no importance. I want you to fully realise all the foregoing, since your realisation of what happened at the time of the Big Bang will give you a glimpse of what happened at the time of the sundering of UNIVERSAL CONSCIOUSNESS to permit the creation of individual form to take place." [Christ Returns - Speaks His Truth, Letter 5, page 20]

"After the Big Bang, the Father-Mother Creative Process was divided into two different energies, continually working apart and together, independent yet mutually constrained to work together having individual characteristics or 'natures' - and different functions. Therefore, their work load was/is different yet indivisible." [Christ Returns - Speaks His Truth, Letter 5, page 23]

"DIVINE CONSCIOUSNESS is the re-union of the original IMPULSES within UNIVERSAL CONSCIOUSNESS which were released to become both the activity and the substance of creation at the moment of the Big Bang." [Christ Returns - Speaks His Truth, Letter 6, page 134]

"Laughter is a consciousness impulse which ripples across your skies, from one planet to another, through your Milky Way and out into the furthest reaches of infinity. As infinite as Divine Consciousness, it came into existence at the moment of the Big Bang." [Christ Returns - Speaks His Truth, Letter 9, page 14]