Russell
"These two opposing actions and reactions constitute the electro-magnetic oscillations, or compression-expansion sequences, which are present in every mass and which constitute the mechanistic or life principle of the universe. These sequences have a periodicity of preponderances which are first preponderantly generative and then preponderantly degenerative, which we know of as the phenomena of growth." [Russell to NYT - 1930 November 2] 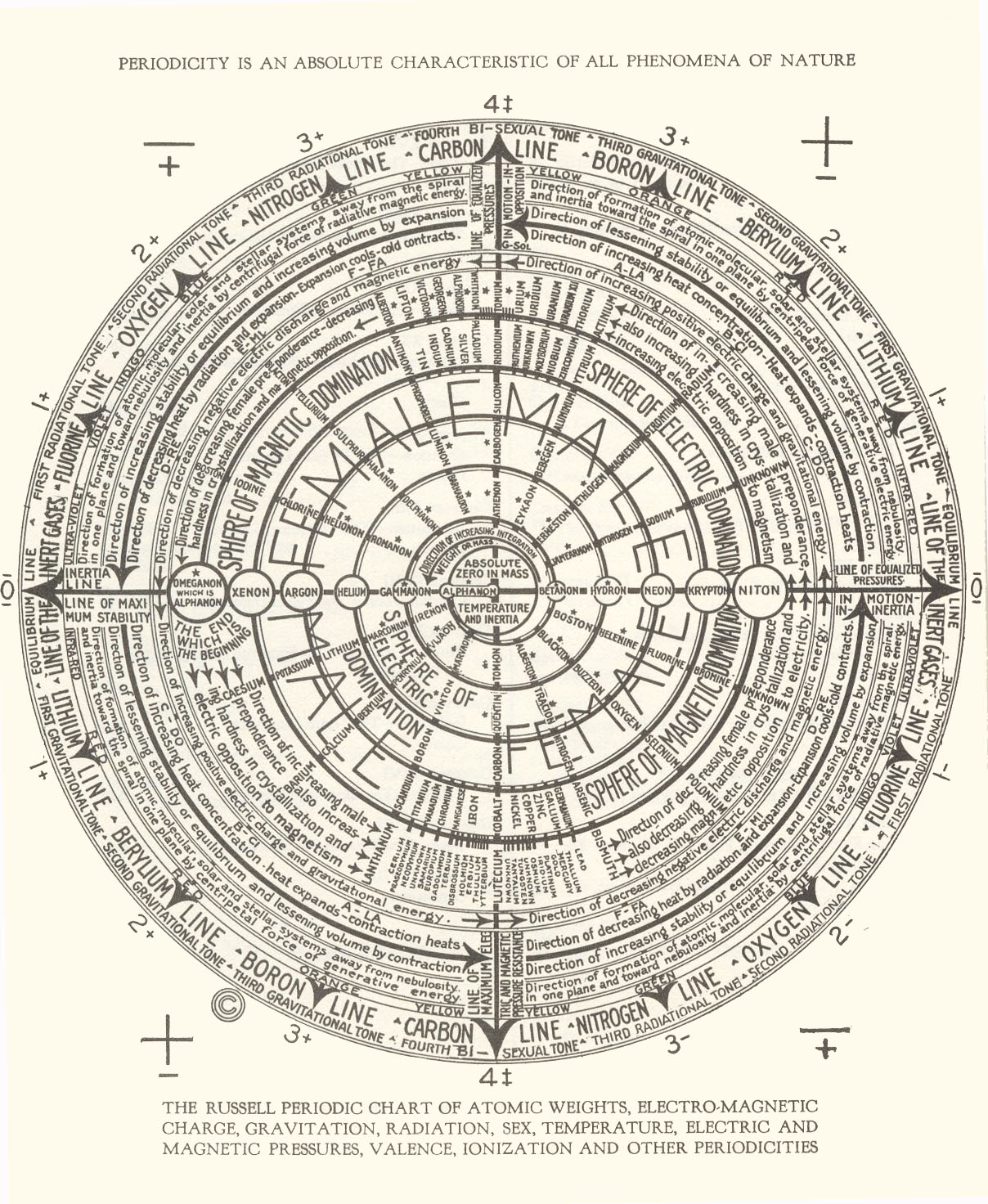 Periodicity
(courtesy University of Science and Philosophy)
(click to enlarge)


Periodicity in time is often specified by its frequency, the inverse of the repetition period, which has the metric units of hertz (the number of periods per second).
Oscillations, waves and standing waves have crests at periodic intervals of space and/or time .(Wikipedia)

noun: the quality of recurring at intervals. Repeating, cyclical.

Schauberger
As also happens with rapidly moving tractor-drawn iron - steel - ploughs[18], this gives rise to electrolytic dissociative effects and detonating-gas-like eruptions (so-called earth-rumbles) over a wide area, which further enlarge the structures mechanically that have already been pre-loosened up through their inner excitation. That is to say, the above forms of inner motion and excitation mutually amplify one another by way of such chain-reactions, whose periodicity rises by the square of the rotational velocity. On the one hand the products decisive for development are ur-created, i.e. the buoyant atomic forces (levitation) that effortlessly overcome all physical weight, and on the other, those retrogressive energies, which mortify all life through the enlargement of the tissue-structure. Therefore either the cadaverine poison in ray-form or the life-elixir in an atomic state is created, which overcomes all disease. [The Energy Evolution - Harnessing Free Energy from Nature, Cadaverine Poison in Ray-Form - Ptomaine Radiation]

This higher-grade dissociative process was previously unknown and therefore the reversed process was used to generate energy. Consequently the relatively most destructive form of energy was produced by very expensive systems of generation and used for the build-up of industry and the economy!!! Precisely the opposite can be achieved through magnetolytic dissociation. The naturalesque process of decomposition is one in which the moved and decomposing matter is cooled all the more rapidly, the greater the rate of acceleration along the longitudinal axis, leading to a corresponding rise in the periodicity of the rhythmical dissociative motion (viz. the rise in periodicity associated with the well-known explosive effect, which produces recoil velocities of up to 5,000 m/sec [16,404 ft/sec]). [The Energy Evolution - Harnessing Free Energy from Nature, Magnetism is the Function of Levitism and Electricism is the Function of Gravitism]