A1. Keely says "matter is bound up energy". Energy in SVP is entropic while force is syntropic. So matter is where entropy is held in bonding circumstances (concord). If the Neutral center were depolar it would be inert and it is far from inert. A NC is where forces and energies are held in equilibrium with each other - like a fulcrum under a seesaw. A vibratory unit (centralization) is the sum total of all these syntropic and entropic forces and energies sympathetically associating with and counterbalancing each other.

When one neutral center radiates a conical vortex to another neutral center, the vortex reverses direction at the point of balance between the two Aether points, called the plane of inertia. This reversal of direction creates a centripetal cone wave out of a centrifugal cone wave.

A2. Your description is more or less ok - you left out the atom or more specifically the rotating etheric capsules or envelopes. Also the vortices are or exist by virtue of the incoming syntropy and outgoing entropy wrapping (rotating) around each other. Else where do the vortices come from? How do they come into being? Your second paragraph is too superficial. Each atom is composed of smaller aliquot particles (centralizations). These have their own discrete chord of frequencies. These frequencies synch up with those of other centralizations thereby establishing sympathy between centers. The communicating media is a high etheric frequency range of sympathetic vibration and sympathetic oscillation. [See Connecting Link in svpwiki.com]

A3. This may be true, working in combination with the other factors going on at the same time. A Neutral Center cannot be a Neutral Center without its effects. Therefore the etherons and atoms formed around the neutral center are part of the equation, concurrently.

Q4. These rates of focalizing and radiating the Aether fluid create sacred geometric shapes due to the compressing (spherical) and expansive (cubical) streams of force.

A4. Vibrations and oscillations are geometric (volumetric) dynamics. The motions and vectors of these motions are therefore, to some degree depending on diverse factors, harmonic (coincident quantifications) in relationship. It is these harmonic vectors and dynamics that may be considered as causative of what some consider "Wikipedia, sacred geometry".

Q5. These shapes of vibratory units of matter and force are the effects as the aggregate moving through cycles of life and death, the neutral center’s vibration waves moves from nebulous+1 ovoid +2 oblateness+3 true sphere+4 oblateness-3 ovoid-2 nebulous-1 and back to the stillness, Aether.

A5. The overall (composite) shapes of motion-generated spheres and ovoids changes over time and per its stage of evolution and devolution. Russell illustrated this idea quite well but incompletely. These spheroid type shapes are a function of the polar interchange happening in the creation, formation and function of vortices - an effect of polar interactions. Rigid line geometric figures are derived from enumerations as ratios of their relationships. The various Pythagorean solids as geometric figures are a happenstance of these numeric relations and not a cause of them. Regular figures are formed by harmonic ratios of even multiplicands and devisors. Or what some call whole number relations that do not have remainders.

PS: Aether, in SVP is Undifferentiated Ether, a different substance. If we don’t get our terms right we won’t get our understanding right.

A6. The Law of Force to which you refer acts through a highly complex series of dynamics beginning with disturbance of equilibrium of an atom’s neutral center. This disturbance is of the etheric subdivision, according to Keely. In propagation terms this disturbance may be either syntropic or entropic increase. If this change of state or condition is syntropic it acts through the Law of Cycles to increase local energy (development of discords) until equilibrium is disrupted and dissolution of the atomic structure follows. If this change of state is entropic the containing etheric envelope expands which expansion may be slow or fast releasing contained latent energies (mutual discordant repulsion). Propagation is a sequence of entropic radiations (expansions), which at what is termed a plane of inertia, become somewhat neutralized. On passing this plane the polarity switches to predominantly syntropy (after encountering positive sympathetic outreach from the next center) and is drawn to that center thus invoking the Law of Cycles which develops discords and hence renewed etheric liberation. The cycle repeats for as long as the radiant energy persists. It is these polar expressions (either syntropic and entropic) and their interactions that creates the vortices pictured so well by Walter Russell. What is described above is an over simplification of what sound is and its propagation from and between disturbed centers.

Q7. Keely’s Etheric, Atomic, and Molecular particles are composed of three units of polarized streams of force attracted by their harmonic neutral centers’ pitches and compressed into a sphere by three etheric fluid envelopes. These spherical particles are composed of triplets, which rotate at 90 degrees to each to create a full range of motion within the spherical envelope.

A7. Without writing an entire thick book on these dynamics detailing each of them and their interactions I can say your description is in the ballpark. A triplet rotating within a larger envelope would constitute a vibration of the outer envelope, would it not, when considering Keely’s strict definition of vibration and oscillation? This being the case creative vibrations and oscillations are not limited to outer oscillations. Etheric envelopes are not triplets (three particles). They are three distinct envelopes or films surrounding and enclosing upon themselves. What is interesting is the mode of transmission from center to center being an etheric conduction of disturbances. More on this conducting etheric propagation later.

Actually I’m detailing this process in the new rewritten and edited 2nd edition of my earlier book "The Physics of Love". Hopefully this new revised 2nd edition will be available in March or April of this year. 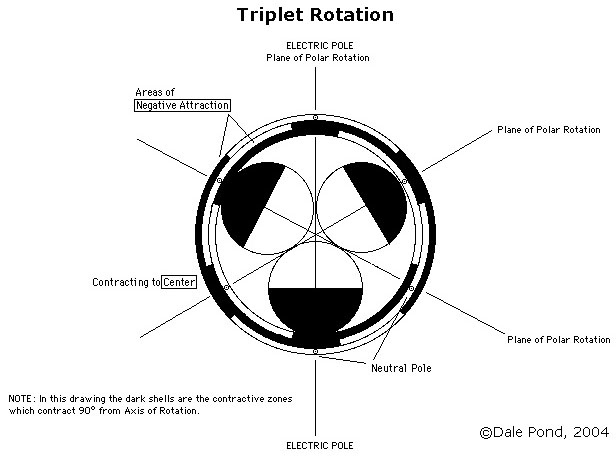 Q. - I have a few questions , based on conclusions drawn from the fractal holographic theory:

A. - I haven’t studied the "fractal universe theory". But I have studied the concept of fractals, harmonics, etc.

Q. - Assuming the following is true (correct me if I am wrong) - the whole universe taken as a whole, can be divided into superclusters, clusters, galaxies...... molecules, atoms, quarks..... all the way down to the Vacuum Energy flux or Quantum soup. The order or creation is clearly from smallest to biggest, meaning the quantum soup energy superimposes to make bigger packets of energy and so it continues, atoms make molecules, molecules to galaxies and so on….

Q. - Is it safe to say that the brain, being thick matter, is actually a result of superimposition of finer energy superimposing?

A. - Who can say? Man needed a transducer between the higher tenuous state of Mind and his lower grosser 3D body. Suggest reading Cayce’s material on Adam - the first man. See Transducer.

Q. - With that, one may say that the mind actually came first, before the brain and the brain is just a physical representation of that finer energy?

A. - Yes, the brain is a sympathetic resonator to the sympathetic compound Interetheric streams. When you boil it all down there is nothing other than the Mind.

Q. - About computers, one may say that the hardware does not 'create' the software, but rather the arrangement and influence(electricity) upon the hardware loosens up or creates an environment where the finer energy and finer particles that are ALREADY THERE may move more freely and in an orderly fashion? I hope I am being clear.

Q. - Also, according to ancient texts, referring to god (not the gods who come down to earth in dragons and boats and birds that some texts speak about) but about God the all pervasive, omnipresent deity who has no form, could these texts be talking about space itself?

A. - According to Russell God is as Outer Space or universal vacuum (lack of grosser materiality). See Magnetic White Light of Mind and links

Q. - Space is everywhere, it permeates everything, but in fact there is no empty space because if you zoom into space you will always find some energy or matter in some form to infinity(or to the Planck length i suppose). The way that I interpret what my religious mother told me is this:

A. - God is all "things" because all things are made from centralizations of polar substance hence Mind or God is or is as or inhabits this ultra fine realm of super fine or tenuous substance of Mind. See Space, Subdivision

A. - Not punished so much as experiencing returning karma or reaction of one’s thoughts and actions. Consequences are impersonal or neutral in their actions and reactions. One does then experience consequences of that one thinks and does. See As a Man Thinketh

Q. - Mom -When you die, you will go to a place to be judged and either sent to heaven or hell
interpretation - When you die, your physical senses will break down and the mind will once again be set free within the network of the quantum soup(or perhaps another frequency within the fractal) and you will have no choice but to analyze yourself honestly(because you cannot lie to yourself as easily as you can to others), thus determining what you deserve and promptly sending yourself 'there.' This 'place' may be another life in some universe(fractal dimension, frequency) somewhere or not, I am not actually sure.

A. - In human physical form we are over powered by the five sensorial inputs. When the body dies those are no longer present as one assumes a consciousness free of those inputs. Nothing really changes but the type and quantity of inputs and outputs. See Death

Q. - Mom - Confess to your sins so god can forgive you
interpretation - Apologize because it is much easier to forgive yourself after you have asked for forgiveness from others.

A. - Holding grudges against self is self engendered condemnation. Release those thought forms and their consequences are removed. Replace negative thought forms with positive ones. God does not live outside of ourselves. See Belief

Q. - ok and one more question -
I can't help but think we live on a planet that is a planet from our perspective, but from an intergalactic species' perspective is a petri dish. I am also convinced that the politicians and royal families(they are obsessed with bloodlines) and all the powerful people hiding their technology, secretly pulling the strings are just doing so for experiment's sake. How can i reconcile the idea that this planet is controlled by some cruel(from our perspective, for we are cruel to other animals and we think it's fine) intelligent race that suppresses humans(Tesla, Rife, Reich, etc.) the same way we suppress our animals if they try to escape or help others escape, and the universe is a hologram? Sounds like a good book idea.

A. - One’s concepts are self created and those concepts constitute our universe or (ir)reality in which we live. So far as egoic humans go there is not anything other than our concepts about self and life. Letting go of those beliefs results in recognizing our Oneness (in consciousness) with all else that exists - 'God', Mind of God, actuality, etc. In other words any concept other than this Oneness is self created and therefore not real. Suggested reading: Dialogue on Awakening.