Chapter 8 - The Oneness of Gravity and Magnetism - III, page 181

The electric current begins and ends at cathodes. Cathodes are still points in the zero universe from which the energy of desire for creation is expressed. Chemically, cathodes are the inert gases of the octaves, which are not elements, for they will not mix with them. They are the seed from which the elements spring, and to which they return. From the spectrum standpoint they are white light from which all colors extend when put under electric strain and to which they return when the strain ceases. From the tonal point of view they are the keynotes of the octave from which one can never escape knowledge of their presence in every tonal harmony. From the mathematical point of view they are the zero of the whole octave, which is more fully described in Chapter XI. From the geometric form point of view, which its basis for motion gives it, the inert gas consists of four rings, one within the other.

1. Magnetic poles are "created" by coiling a wire around a bar of steel in such a manner that the compressing rings of the electric current will produce these so-called magnetic poles at the ends of a bar of steel. That is what electricity does. It produces a potential of electric motion around a still center, but the still center is gravity. To be correct these poles should be called gravity poles, connected by a gravity shaft. They control the sex-division of Nature. The Magnetic Light is sexless for it is in equilibrium. Its electric division into pairs creates the dual sex condition which we know as male and female. When these two conditions unite they become ONE. Gravity poles are TWO, when divided by the electric current. When they unite they become ONE CENTER OF GRAVITY. We have always called them magnetic poles when they were TWO but when those two were united we have then called them a center of gravity, and that is not consistent.

the holes out of the rings. They did not come there in any other way. Electric motion does not create gravity poles. It merely locates existent points and makes them identifiable. It makes the invisible become seemingly visible. However, it never occurred to early observers that the division of God's stillness into sexed pairs would have to have a measure of balanced control over such a division. In other words, if the one condition of balanced stillness in the zero universe is divided into two unbalanced conditions, it is then necessary to have two controlling points of stillness around which motion can spin while thus divided.

3. The two poles are, therefore, poles of still Magnetic Light around which the divided electric pairs can manifest their light of motion. The two poles, thus divided, have within them the desire to be united as one, by uniting the two divided pairs of conditions as one. In this manner the two poles which have united, become the common center of gravity of the whole gravity shaft of the mass controlled by it.

6. Polarity begins as sexless unity at the cathode, which is the location for the inert gases in the octaves of elements. From there it is divided into sex-conditioned pairs as they are extended centripetally toward anodes. They again unite as one sexless unity at amplitude wave positions where they collide and become the two hemispheres of an incandescent microscopic, or macrocosmic sun, which corresponds to a "loop of force" in an electric current. 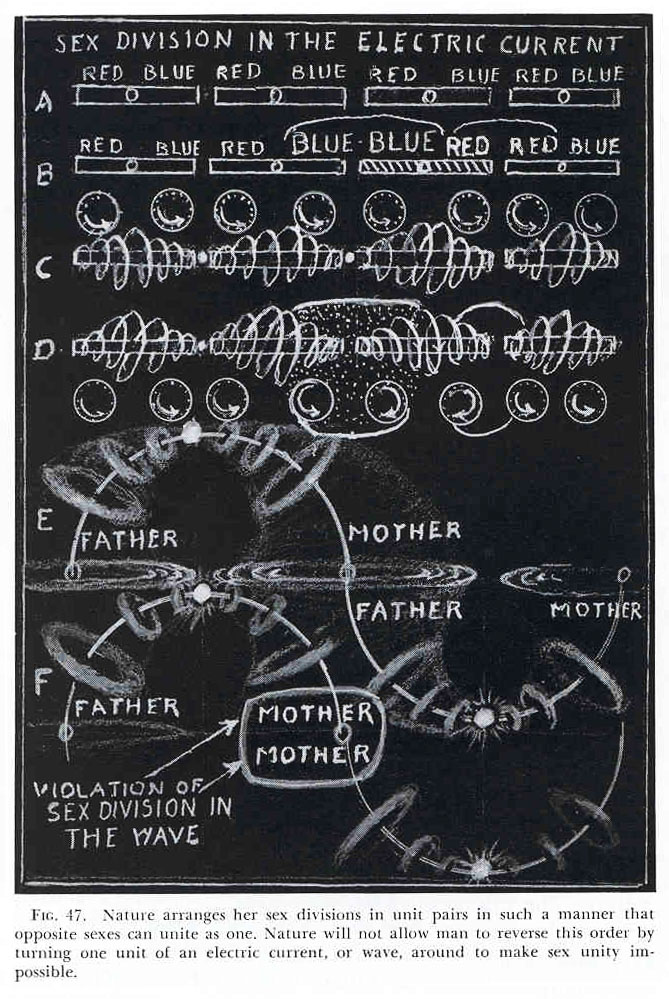 Fig. 47. Nature arranges her sex divisions in unit pairs in such a manner that opposite sexes can unite as one. Nature will not allow man to reverse this order by turning one unit of an electric current, or wave, around to make sex unity impossible.

8. Electricity spins around all centers in this whole universe in one direction only. C. represents this universal direction of electric spinning around the same series of bar magnets. That one direction is clockwise, or anticlockwise, according to the position of the observer. If you look at the spiral turning from one end, in the direction of the other end, you will see a clockwise direction. If you look at it by reversing your position you see it anticlockwise. The direction of turning does not change because you change. You cannot pick out one half of a cycle, however, and reverse it as indicated in D.

9. The most important new thought in relation to electricity is that every action creates only one cycle of an electric current. That one cycle is the electric record of that action. The omnipresence - or Oneness of the universe - repeats that record throughout the universe. The motion of your little finger, or of a dynamite blast, will create one cycle for each action, for electricity is the recorder of Mind-thought, and Mind-thoughts are consecutive.

10. Future laboratory techniques should eliminate from two thirds to nine tenths of its wiring. This will follow a greater knowledge of the geometry and mathematics of space, and especially the tonal nature of octave waves, to make it possible for cathodes to find their anodes without wires, as they do in Nature. The cylindrical solenoids of today should be entirely eliminated, especially where they encase anodes and prevent their expression of power by the way of equators. Vacuum tubes for every purpose should be entirely re-designed to conform with the action-reaction mathematics of the cycle, which accelerates

and decelerates in cube ratios, as potential is multiplied for one half of the cycle, and divided for the other half. The cylindrical coil ignores this law of Nature, even as Einstein ignored it, and makes very clumsy affairs of step-up transformers and a tremendous complexity in electronic machines, which is entirely unnecessary.

It is said that storms in the northern hemisphere are anticlockwise and are clockwise in the southern hemisphere. That is because you are looking down upon it from one end, then you are looking up into it from the other end. You would see the same effect if look into the spiral of your bath tub drain, then look up from under it.

To account for this unnatural phenomena The Coulomb Law was adopted, which says that opposites attract, meaning oppositely sexed mates, and likes repel, meaning similarly sexed pairs. This law is invalid, for oppositely sexed mates do not attract. They are forced into collision by the electric action of dividing Oneness into unit pairs. The instant that they do collide they use their utmost endeavors to re-attain the sex-divided condition by recharging their discharged condition. Nature helps in this process by assisting to re-charge with every heartbeat, every breathing cycle, and the food one eats.

Space will not allow further amplification of this process in the nature of electricity, for enough has already been given in the high points of essentials to serve the purpose of this book. It is not well, however, to leave this mystery of how "magnetism" picks up iron nails and "attracts" steel needles, unexplained, for the entire electrical engineering world is paying heavily for lack of this understanding in many ways, the more expensive one being the vast wastage caused by building improper coils, solenoids, armatures, step-up, step-down transformers and electronic tubes.

The element iron - like cobalt - is formed almost at the very amplitude of the wave. Its position is almost at the collision point where mates find unity in each other. Also, iron is on the red side of the spectrum division, and the red side bores within the blue when they seek unity. Nickel, cobalt and copper are on the blue side of the same octave. Because of this position in the wave, iron and cobalt are so constructed under high compression and high melting points that they "remember" the motion of the electric coil which borned them, even after that coil is removed. The spinning effect still continues within them, and will still continue for many years unless they are heated to a sufficiently high temperature to explode the power of electric potential, which these poles have accumulated. Conversely, cold multiplies that memory which heat destroys. At absolute zero, polarity and conductivity are both more intense. It should be sufficiently convincing that the "magnetism" attributed to this electric effect could not be an existent force, for if it were it could not be destroyed by cold. Factually, cold multiplies electric potential, and heat divides it. This fact of Nature should bring to an end this unnatural concept which attributes electrical effects to something other than electricity.

Copper and nickel occupy the same relation on the blue side of their octave that iron and cobalt occupy on the red side, yet neither of them are able to retain the memory of the electric coil which borned them. The reason for that is because the blue side seeks the outside of mass and, therefore, has lower densities, with consequent less power to retain a "memory" of the motion.

Regarding the compass needle which seeks the point of north at one end and the point of south at the other end, the principle is the same. Every compass needle is a miniature bar magnet. If you place a lot of iron filings on paper, in the familiar way shown in all text books, and shake them over a magnet, those findings will form curved lines. These curved lines are called magnetic lines of force on that paper, and also in the so-called magnetic field of a planet. They are not magnetic lines of force. They are merely the curved planes of opposing pressures

which electricity is causing in its efforts to compress. The vortex of gravity which is in the compass needle, will follow these pressures. Every effect of motion in this universe is an electrical effect caused by an electrical force acting under the control of the invisible Magnetic universe. The invisible universe entirely dominates and controls the visible universe, but motion is entirely electric.

Return to Atomic Suicide - the book