God thinks in electric pulsations which are recorded in motion as four pairs of rings which are compressed into spheres. Each cyclic pulsation is manifested by the projection of four concentric light rings in one plane from one point of Magnetic Mind-Light, in which the red half of the spectrum is on the outside of the rings and the blue half on the inside. These four rings are the seed of the octave wave and occupy that position in the wave known as the zero group of the elements, or inert gases.

The wave is created by dividing the four sexless rings of the inert gases into four pairs of oppositely sex-conditioned rings, and projecting them toward sex mates of adjoining wave-fields to find balance and unity in each other. God's concentrative thinking compresses these mate rings as they are projected. This is the generoactive (uphill flow of energy) principle which multiplies power and speed in the inverse ratio of the cube, as they are thus centripetally projected, until the red and blue

pair of cyclonic vortices, thus resulting, collide at wave amplitudes, midway between the two zero cathodes from which they were projected. This is the manner in which unbalanced and separated sexed pairs are united into the Oneness of the two 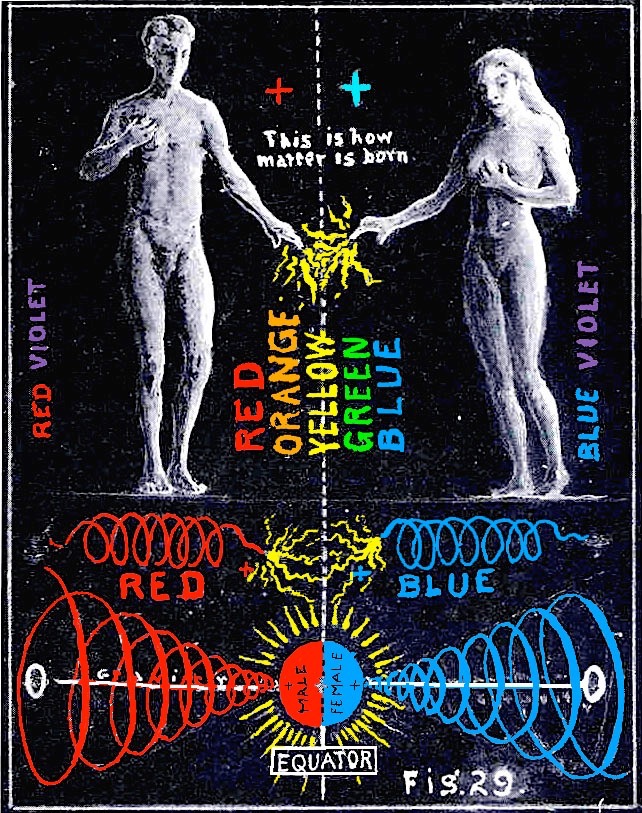 Figure 29
(courtesy University of Science and Philosophy)
(click to enlarge)
Nature creates sex-conditioned bodies by polarizing an equilibrium condition. Nature destroys bodies by depolarizing them. Nature repeats bodies through interchange between their opposite conditions. All bodies are eternally repeated.

Within the four zero rings of the wave is the cathode mother womb of space which is seeking the outside to fulfill her office of borning the seed of the father. To aid this process the four pairs of projecting rings gradually close up their centering holes as the rings are compressed from their cone bases toward their apices, where the collision of sex-mating completes the closing in the incandescent sphere thus formed.

The wave shaft itself is the still God-Light of Mind which is like unto the still eye of the cyclone at the polarized end of the cyclone shaft. The true sphere thus formed marks the maturity of the imaged-form which is completed at the junction point of eight cubes where the octave wave ends at amplitude. This is where microscopic suns of almost timeless duration are formed. Here also is where majestic suns of huge mass and durations of billions of ages in duration are also formed, to function as seed for borning of planets and lesser forms of God's imaginings. From that point of maturity of such flaming carbon masses as our sun, God's decentrative thinking causes these suns to project rings from the plane of their equators in series of four which, likewise, compress into planets in series of four. These, likewise, forever project rings in series of four until all that God gave in light rings of His electric pulsings are regiven to the four of their zero group as refolding records of that which has been unfolded.

Within this process lies the mystery of the seed and its growth as its pattern unfolds, and the record of the pattern as it refolds. And as suns throw off rings they oblate in like ratio and the holes come again as one can see in the Dumbbell nebula which was once a mighty sun, or in thousands of other ring formations throughout our heavens. See figures 30, 31, and 32.

The creator's atomic systems do not begin in the wave in elements which are centered by holes. They begin only when cen- 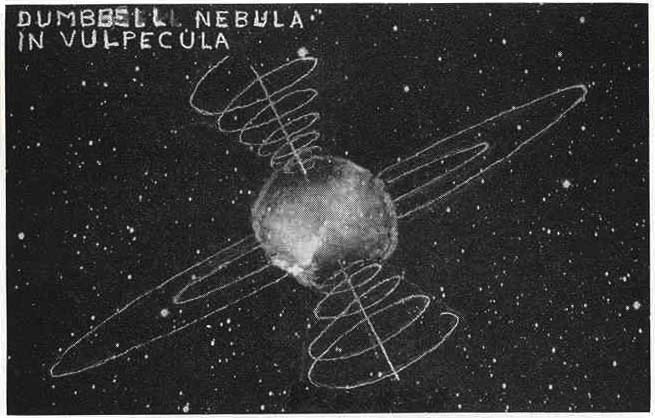 Fig. 30. Illustrating the death principle in all matter. Spheres are created by compressing rings to form them. Spheres are then disintegrated by projecting rings from them until a black hole surrounds their axis of rotation and they gradually expand until they eventually disappear into their cathodes.

trifugal force has multiplied sufficiently to throw off spiral arms and rings from equators of matured suns. Until that time all forming elements are centered by the gradually lessening cathode holes of the mother womb until the invisible patterned seed of the inert gas becomes the visible patterned body form of the seed image. During this entire cycle the still Magnetic Light of the centering cathode is projecting rings outwardly from it in pairs around a wave-shaft, to manifest the Love principle of giving, while the compressed bodies thus formed are exploding outwardly, likewise, to manifest the principle of re-giving.

The result may better be pictured by the tornado which every action in Nature emulates. All electrical motion in the octave wave turns spirally around centering, still Magnetic shafts, just as cyclones do. All electrical compression begins by violent expansion to create a condition which borns its opposite, as all opposites in Nature do. This effect is the answer to the electrical engineer's question which asks WHY his electric current is only at the surface of his wires and cables, and not all through them 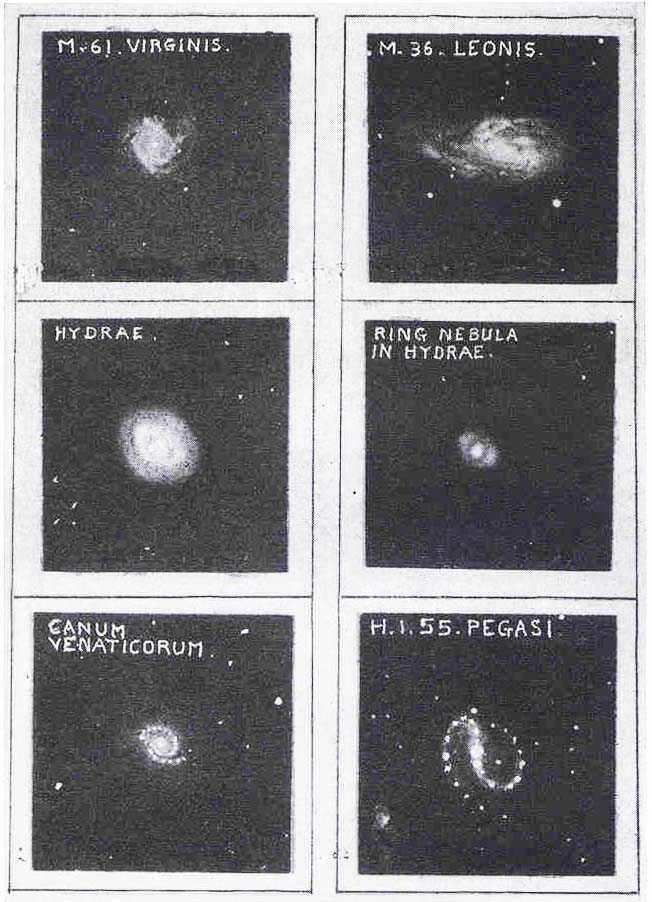 Fig. 31. All matter, from microscopic cells to majestic suns "unwind" spirally, and centrifugally by ejecting rings from the planes of their equators. 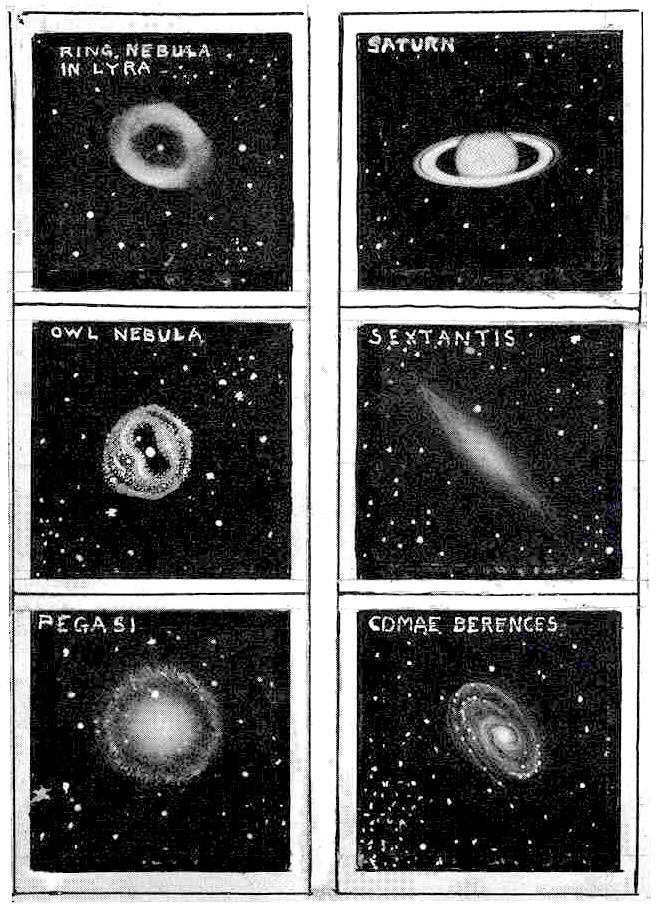 Fig. 32. The centering shaft, around which suns rotate, again compresses another sun into its vortex to repeat the process until all its mass disappears as rings. Lyra and Hydrae nebulae are good examples in the stellar system and Saturn well exemplifies how planets in our solar system, disappear into their zero.

except at the points where loops of force count his impulse frequencies for him. If it were possible for him to slice an electrical current into sections he would find that each section would be a ring whirling around a still center, except at points where collisions occur between the two lights of the spectrum, which are so forcibly projected from cathode zeros.

Thus it is that gravity is seemingly created to control the compressive force of Nature and the regiving reaction of the creation of an expansive force. Expansion is the result of MIND-DESIRE TO GIVE by its outward explosive effect from its zero cathode. The re-giving of compressed energy, likewise, is an outward explosive effect, as electric compression ceases, and the result of that effect is to born its opposite and leave great black holes within compressed masses as they return to the zero of their Magnetic stillness.

Thus it is that God's Law of Love is manifested in every action-reaction of Nature. After long aeons of man's hard experiences in learning how to manifest the Love principle in his dealings with other men, he will some day know his own Oneness with God, and find happiness and peace which can only come to him by having made that supreme discovery of his own divinity.