Chapter 6 - The True Nature of Electricity and Gravitation - III, page 140

The text books tell you that there are two kinds of electricity, a positive kind and a negative opposite. Let us show you how impossible and illogical this is, and how contrary it is to Nature's processes in the construction of matter.

We again repeat the fact that electricity does only one thing - it divides an equilibrium into EQUAL pairs and compresses them until they unite to create an explosive condition around a still point of gravity. When that purpose has been completed electricity slowly dies in all masses, until all motion has ceased in them.

It does not require two forces to compress anything. If you wish to compress air into your tire you compress it with a force exerted in one direction, which is inward from the outside. The greater the force you exert in that direction the greater the multiplication of resistant pressure within your tire, as compared with the pressure outside of it. If you open a valve the

pressure within your tire will explode outward without the aid of another kind of electricity to help it escape from its bondage. It will seek its equilibrium level without another kind of force to help it. The universal vacuum is that universal equilibrium level. Any departure from that state in Nature's normalcy is a forced departure which causes a tension, or strain. The zero universe is without tension or strain. All matter is compressed motion. All compressed motion is explosive. It is in exactly the same condition as your tire which you have compressed into a strained, tense condition, from which it constantly exerts its own strength of desire to escape into the universal equilibrium. This desire for outward explosion is inherent in all matter. There is no desire in matter to hold itself together with other matter.

We refer you back to figures 6 and 7 for further study. Note that the zero one is free from tensions, and the other one is full of tensions from which they can be freed only by generating enough heat to begin their slow process of radiation, or decay.

It will help you to better comprehend our meaning if you stretch a piece of elastic from its normal equilibrium condition of rest. It takes force for you to stretch it but it will return to its normal condition without need of another kind of force. In stretching the elastic you have created strains and tensions of an abnormal condition. The zero universe is balanced. Everything in Nature which becomes unbalanced by the exertion of any force will eventually find balance in the Cosmic vacuum, which is the one normal condition of space. It is also the CAUSE of all EFFECT and the SOURCE of all ENERGY. If you fully comprehend this, you can now solve that great mystery which great thinkers in science thought to be insoluble - the mystery as to how matter emerges from space and how space swallows it up again.

How was it that early investigators decided that there were two opposite kinds of electricity instead of the one kind which produces motion? It was because the two opposite conditions of living and dying - growing and decaying - heating and cooling - polarizing and depolarizing, and all other effects of motion, are expressed in seemingly opposite directions by seemingly

opposite forces. There are no opposite directions, or opposite forces, however. There are but divided sexes which exert the same force and in the same direction. The one force is compression and the one direction is spiral. That which seems to be two are one when they are united. They could not unite if they were pursuing opposite directions, nor could they be one if they were opposites. One's senses are very deceptive. They convincingly make one believe the very opposite of what they manifest.

Early investigators did not take into account the fact that motion is a cosmic abnormality which has been caused by a disturbance of stillness. The normal condition of this universe is a rest condition. Motion is a created effect which emerges from rest and returns to it. This universe of motion might be likened to a quiet pool into which a stone has been thrown. The normal quiet of the pool has been disturbed by a force. The normal quiet will return without the aid of force. There is no opposite force which causes the return to normal balance.

And so it is with life and death. They are two seemingly opposite effects which emerge from the Creator's zero universe as a disturbance of its vacuum by seemingly opposite pressures. So, also, are heat and sound. But all of these which emerge by the application of force, return to their normal rest condition without the aid of another kind of electric force, or a change in their one universal spiral direction.

Let us be sure that you understand this vital fundamental of Nature that has so grossly deceived the greatest minds of the centuries. We return to the tire which you compressed into a very much higher pressure than that of its environment. That pressure is held in the tire by a sealed casing, but it is very difficult to entirely seal it against slow leaking from some part of it.

Always remember that every action you perform causes motion - and motion is electric - and electricity moves spirally - and that spirals are always created in pairs. You cannot cut a section through any electric current anywhere without producing rings which spin around holes. Try it. Pass an electric current through an evacuated tube with sufficient air, or vapor in it to aid visibility, and you will see the rings which electricity creates.

You will see them as rings of light spinning around black holes. Those rings you see are divisions and extensions of the "ultimate particles" of Creation, for there is no other form in Nature than opening and closing rings. They are the basis, and the substance of all form. When they appear, matter appears. When they disappear, matter disappears, and all effects of matter with them, such as sound, color, heat, form, density and dimension. See Fig. 41.

Once again we repeat that this universe of motion is entirely electric, and there is no power, or quality, in electricity to pull inward from within. Again we say - electricity does but one thing - it compresses to divide into pairs for the purpose of creating a dense pressure condition known as electric potential. This is done against the resistance of the universal vacuum, which finally conquers every effort of electricity to simulate cohesion.

The entire principle of the construction of matter is based upon surrounding an area of rest in the omnipresent vacuum with four rings, then in compressing the rings in divided and extended pairs until the holes are eliminated and flaming carbon suns occupy the holes. Suns then throw off rings in series of four until the holes return. Electricity causes the compression and the zero vacuum is the expression of Mind-energy which causes the expansion. This universe is a compression-expansion pump. One end of its piston is in the eternal vacuum and the other end is in the pressures of electric potential.

Remember, also, that every electric action, which is recorded in Nature, like the growth of a tree, or throwing a stone in water, produces rings with holes in them. The young tree starts that way, as a tube, but closes its holes by compression, to become a solid, and every solid is a series of ring layers which eventually open to let "space" in gradually, until space becomes all and the tree disappears entirely into it. Cut your own body into sections and you will find it is composed of rings around holes - your chest - your skull - your bones, arteries, heart, windpipe, nerves and every cell of your body. Electricity works that way. It tries to close up its holes, but very few out of millions of effects suc- 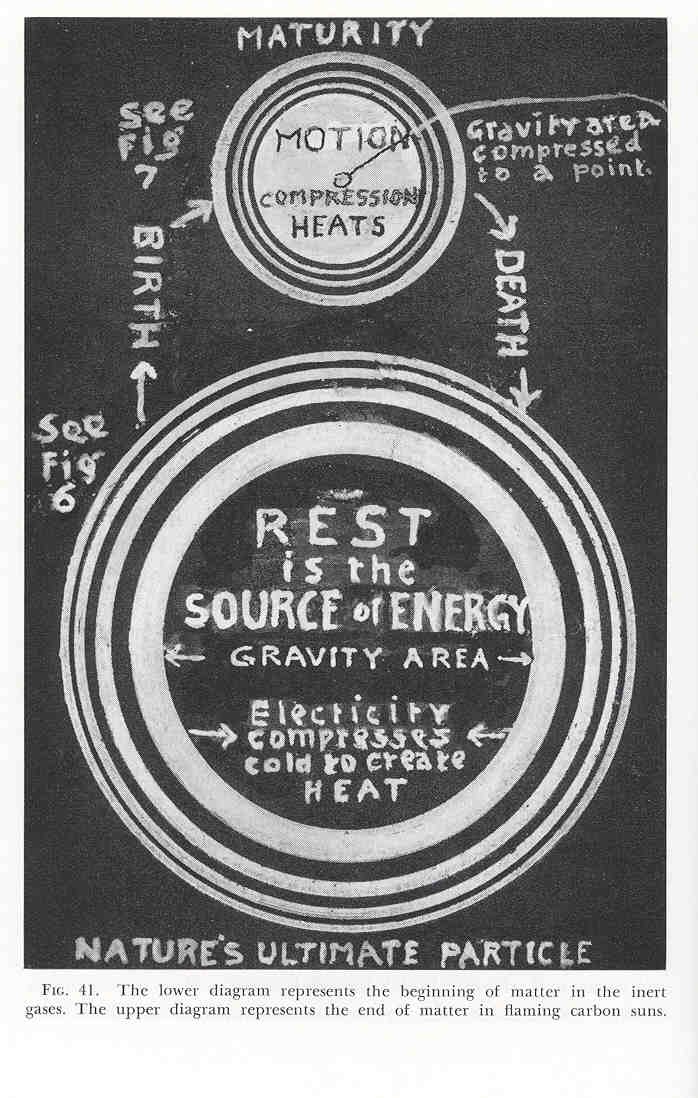 ceed in doing so. Organic life has not one example of body building which has succeeded in becoming a solid, not even the ivory of an elephant's tusk. It is centered by a hole, and its cells are porous.

All Nature, everywhere, cries out its protest to such an unnatural and impossible condition as the nucleal atom. Nature is cellular and cells are rings in sections. Also every cell in Nature is a product of the union of four pairs of rings. Nature also cries out its protest against such a concept as that of a cosmic "glue" of some mysterious nature, which supposedly holds the atom together from within a nucleus. Atoms are held together only by pressure from the outside and sealed from the outside by cold. The inside of every atomic mass is a heat generator and heat consumer. Atomic units have cold centers, but combined atomic masses have relatively hot centers, according to their purpose and position. Its cells must be electrically conditioned to maintain that heat, but no matter what the temperature is in any cell it tends to expand it - not hold it together. Instead of being a glue it is an explosive.

[Return to Atomic Suicide - the book