Schauberger
Modern intuitionless science has regulated the eternal flow of evolution (panta Rhei) in the wrong way and thus failed to notice the possibility of generating ur-forces. Instead of additional products of emulsion possessing development-enhancing functions, it had to make do with development-disturbing reactive forces and resistances to motion that increase by the square of the reversed form of acceleration. According to an age-old maxim, "she half-pulled him down, he half-sank on her". In this play on words there lies a far deeper meaning. It would take too long here to enumerate all the catalysts with various functions, which as Goethe already recognised, form the 'connecting' emulsifying bond. They are ray-forms, upon whose function the development-disturbing rising temperature gradient and the development-fostering falling temperature gradient depend. Paramagnetic catalysts act decentratingly diamagnetic catalysts concentratingly. This fact alone pin-points the incorrect form of development, which ultimately results in the destruction of atoms. Wise Nature, on the other hand, proceeds by way of atomic transformation, which from, a biological viewpoint is the exact opposite. Pressure and fire technology therefore produce retrogressive atomic energies, whereas implosion technology generates super-powerful, forward-thrusting atomic energies, i.e. an almost 100% formative and levitative force. And so the question arises, what actually is a catalyst? The answer is simple. It is a condenser that has been galvanically alloyed with oppositely-charged substances, which radiates predominantly negatively potentiated ray-forms into the naturalesquely inwindingly moved medium. This then activates a flowing diamagnetism, the formative and levitative force that soars upwards and sucks the generating device up in its wake, and which can be regulated by the rate of rotation. With this, the force was rediscovered that enables air-craft to overcome gravity effortlessly and stationary machines to be powered for virtually nothing. According to accounts from earlier times, the high priests of ancient cultures had a commanding knowledge of this power, which they cherished and guarded like life itself so as to be venerated as Gods for their skill. [The Energy Evolution - Harnessing Free Energy from Nature, The Catalysts]

The formulation of all terminology concerning this 'higher' knowledge is uncommonly difficult for the simple reason that today's science has commandeered all the relevant terminology, and thus in the German vocabulary there is a lack of suitable words with which to formulate these new concepts in a meaningful way.[4] For this reason the only way to approach things is by way of circumlocution so that they can be half-way understood by scientists. [The Energy Evolution - Harnessing Free Energy from Nature, The Life-Current in Air and Water]

Dialogue on Awakening
"When you become aware that all the planning and managing you have to do is to clearly align your focus on the feeling you wish to have from your experience, you will have defined the meaning it holds for you. All the details necessary to facilitate that meaning, that occurrence, will happen without any additional effort on your part." Dialogue on Awakening, 3rd edition, page 170

Christ Returns - Speaks His Truth
"There is nothing that electromagnetism has brought into visible being which the human mind can deem to be lacking purpose or meaning.
Science ignores this most basic and vital level of creation. Without an answer to this question, as to why everything which has been brought into visible manifestation by the activity of the twin energies of electromagnetism is invariably purposeful, successful and rational - nothing of any value in the search for your origins will be discovered.
Until science can probe and discover the 'Reality' of the 'space' in which electrical particles of 'visible being' are supported, science will forever remain behind locked doors of materialism. It will be barred to eternal Truth and universal wisdom and imprisoned within the bondage of reason alone - reason which is solely the product of the finite activity of brain cells.

It is to the true nature of the SPACE I intend to introduce you - but before proceeding to this, I must first bring many highly pertinent questions to your attention." [Christ Returns - Speaks His Truth, Letter 5, page 8]

Ramsay
"It will, therefore, be very interesting to all practical musicians to find in this work of D. C. Ramsay's the hand of a true master in the science, who was also a true artist in music, as his compositions and arrangements have been acknowledged to show; and who saw no need to divorce the Art from the intellectual view of its Scientific basis. And those who can read between the lines the unwritten spiritual meanings which underlie.." [Scientific Basis and Build of Music, page 20]

And it is another very interesting fact that those numbers multiplied into each other always make 720, the number in the minor genesis which corresponds to 1 in the major; F1 being the generative root of the major, and B720 the generative top of the minor; so adjusted they place the two D's beside each other - D26 2/3 and D27 - and we see the comma of difference between these two numbers which are distinctive of the major and the minor; 26 2/3 x 3 = 80, and 27 x 3 = 81, and 80:81 is the ratio of the comma. This is the Ray and the Rah in which there lurks one of music's mysteries. Let him that is wise unravel it. It is symbolic of something in the spiritual realm of things; its full meaning is only found there. [Scientific Basis and Build of Music, page 88]

It is very interesting to observe how the number seven, which is excluded from the genesis of the system of vibration, comes into view after the genesis is completed, not only in the seven seconds of the melodic scale, but also in the seven of each of the intervals. As there are seven days in the week, though the seventh was only after the genesis of creation was finished, so there are six intervals, but seven of each, as we have seen; and in each 7-fold group three magnitudes determined by the three genetic magnitudes of the seconds. There is much symbolic meaning in all this. Any of the intervals may be used in melody; in harmony also, either in simple or compound chords, they all have the honor of fulfilling a part; and even those, such as seconds and sevenths, which are less honorable in themselves, have great honor in compound chords, such as dominant sevenths and compound tonics, which fulfill exceedingly interesting functions in the society of chords. [Scientific Basis and Build of Music, page 110]

“The Bushmen in the Kalahari Desert talk about the two "hungers". There is the Great Hunger and there is the Little Hunger. The Little Hunger wants food for the belly; but the Great Hunger, the greatest hunger of all, is the hunger for meaning...
There is ultimately only one thing that makes human beings deeply and profoundly bitter, and that is to have thrust upon them a life without meaning.
There is nothing wrong in searching for happiness. But of far more comfort to the soul is something greater than happiness or unhappiness, and that is meaning. Because meaning transfigures all. Once what you are doing has for you meaning, it is irrelevant whether you're happy or unhappy. You are content - you are not alone in your Spirit - you belong.” [Sir Laurens Van Der Post] 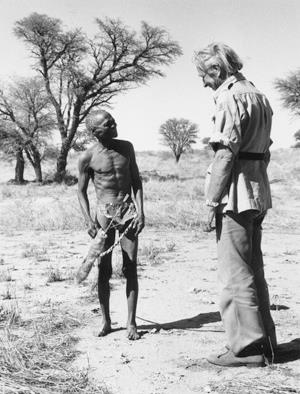 Photograph of Sir Laurens Van Der Post, with a Bushman in the Kalahari Desert.